Compact neighbourhoods allow the residents to forget that they live in a giant metropolis, regardless of its size.

cit·y 1. A center of population, commerce, and culture; a town of significant size and importance. 2. Canadian municipality of high rank, usually determined by population but varying by province. (www.dictionary.com)

But what makes a great city?

A great or "world class" city usually has political importance, international significance, and residents proud to call it home. Most importantly, a city provides a neighbourhood in which to live. Toronto, New York, Montreal, London, and Chicago are all cities of significant size that also offer their residents cozy, compact, neighbourhoods. Compact neighbourhoods allow the residents to forget that they live in a giant metropolis, regardless of its size.

I was looking at a tourist map of Toronto and it was marked with the traditional "tourist traps" - CN Tower, Eaton Centre, Dundas Square, ROM, AGO - but it also was marked with all the neighbourhoods. In just downtown Toronto it lists these neighbourhoods, Little Italy, Little Portugal, Chinatown, St. Lawrence Market, Gay Town, Kensington Market, The Annex, Rosedale, Yorkville, Theatre District, Queen West, King West, Midtown, and outside downtown there are Bloor West Village, Greektown, Chinatown North and The Beach.

These neighbourhoods define unique pockets of a larger city. They all provide the esentials to the neighbours - food markets, restaurants, coffee shops, bookstores, cinemas, boutiques, public spaces and entertainment - but they also define the people that live there and provide places to socialize with fellow neighbours.

This interaction provides a safe environment where people actually care about each other. In a suburb of anonymity, people can behave in reckless manners because they don't know one another. It becomes easier to speed down the street, for example, and creates an environment not worth caring about, evident by graffiti and a "who cares" attitude.

Neighbourhoods also increase property values, evident in relationship between home values and proximity to the heart of the neighbourhood.

Here is my list of geographic areas of potential niche or themed neighbourhods in Hamilton. 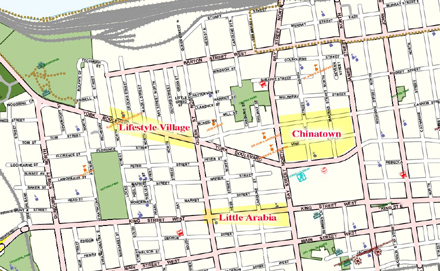 Hamilton is becoming home to many new immigrants from the Middle Eastern nations. Some schools in Hamilton have a population that is 30 percent Muslim. I suggest a Little Arabia neighbourhood fashioned after markets in Instanbul, Turkey, Cairo etc. A canopied area with a lively market atmosphere could take place on the corner of Bay and King. A little incentive and encouragement could establish a streetwall on the south side of King between Bay and Queen similar to the north side.

Similar to Toronto's Gay Village, it can encourage alternative lifestyles with clubs, discos, retaurants and walkups, row home, and loft living quarters. A good location would be along York Blvd between Queen and Locke streets. York Blvd is currently a wasteland. It would need some traffic calming, on-street parking and some incentives to re-urbanize the strip since its destruction in the 1960s. But there is a huge waste of space along this land, and residential squares similar to Savannah, Georgia would fit nicely.

Imagine the streetscape along Barton between Sherman and Wentworth coming back alive. The building stock is incredible along Barton street; with a few incentives it could become gentrified by artists, galleries, studio live/work spaces. It has already started to some degree with the Cotton Centre. It would be a Richard Florida dream come true for Hamilton.

I believe neighbourhoods need to be encouraged for the core. They are quickest method of increasing property values and resulting in a larger tax base for the city rather than continuing to develop monotonous suburban sprawl. An increase in property values for existing neighbourhoods has the same result on the tax base as does increasing the land to be taxed. Furthermore the city profits more because the land is alredy serviced. Intensification makes it easier to police, provide fire and ambulance service, garbage collection, snow-clearing, road maintenance and generally healthier and happier residents.

By brodiec (registered) | Posted None at

Lifestyle village? As a gay guy I have to say that is maybe a antiquated direction. The trend in Toronto and most large cities is away from the ghettoization of queer people and integration in the city at large. Most of the queer people I know living in this fine city in many cases moved here to avoid the ghetto of church and wellesley. That's one of the strong points of the city as a destination for LGBT people and progressive movement for us towards acceptance and tolerance. Otherwise another fine article!