Perhaps the best time to enjoy Locke is on a cool, crisp day in December, when the street is decorated festively for the Christmas season and browsers line the sidewalks.

I lived on Locke street in the mid-1990s, when it was a comparatively dispirited place. Among the sleepy antique and consignment stores were just a few highlights: Ron's Big Easy, a cajun restaurant run by Daniel Lanois' brother, the late Ron Lanois; Henry Black Books, run by the charming and book-obsessed Henry Black (who, I'm sad to learn, just recently passed away); a strange place called Agnes' Floral Creations and Gifts, the purpose of which I was never quite able to determine, given that they didn't seem to sell actual flowers.

Since then, and particularly in the past decade, Locke Street - indeed, the entire neighbourhood - has undergone a renaissance that has been nothing short of breathtaking. As the antique stores have slowly migrated to Ottawa Street (another traditional commercial district undergoing a revival), a wide variety of new stores have crowded in, filling a variety of niches and and collectively providing a pretty comprehensive suite of businesses.

Perhaps the best time to enjoy Locke is on a cool, crisp day in December, when the street is decorated festively for the Christmas season and browsers line the sidewalks. To give you a taste of what the street has to offer, here's a sampling of photos taken over the past few days. 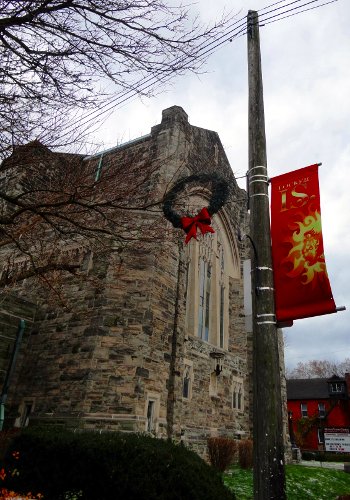 Locke South banners and wreaths hang from the hydro poles 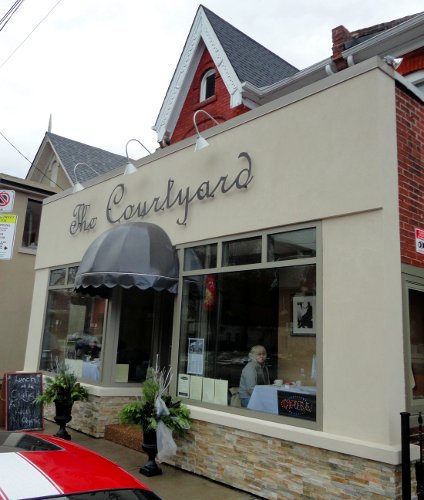 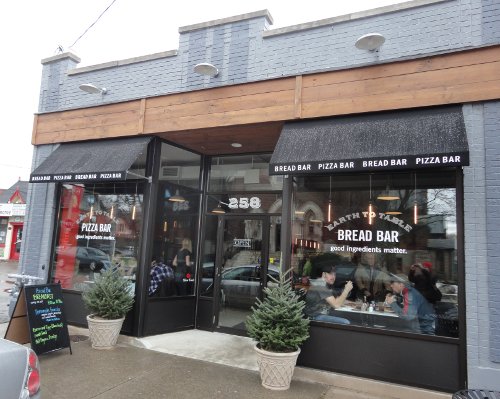 Earth to Table Bread Bar already feels like an instant classic. They started a bit rocky but listened to customers and iterated rapidly. 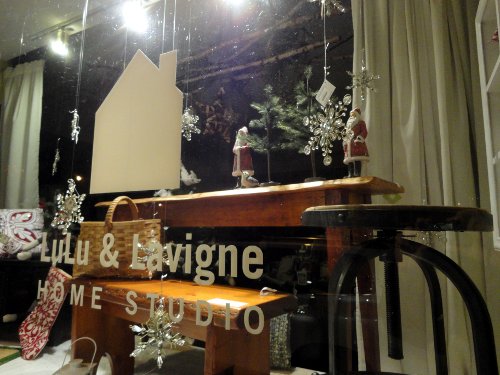 Decorations in the window of Lulu and Lavigne 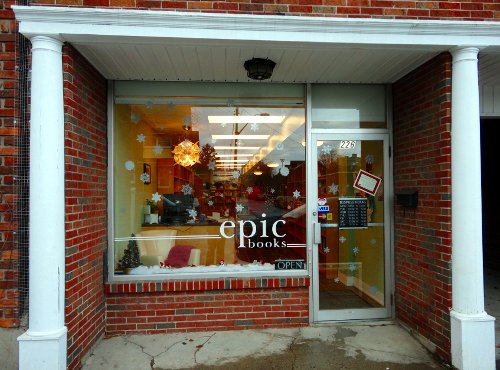 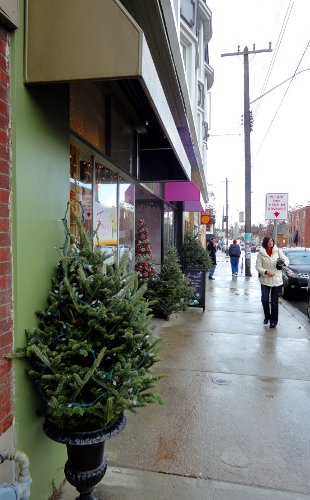 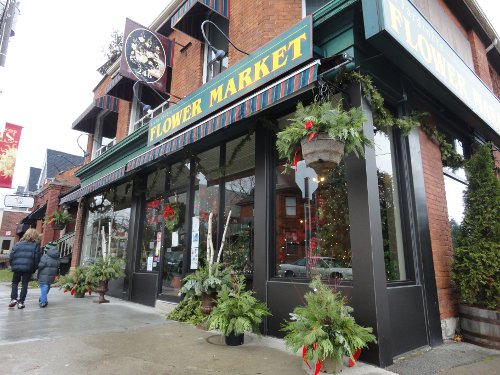 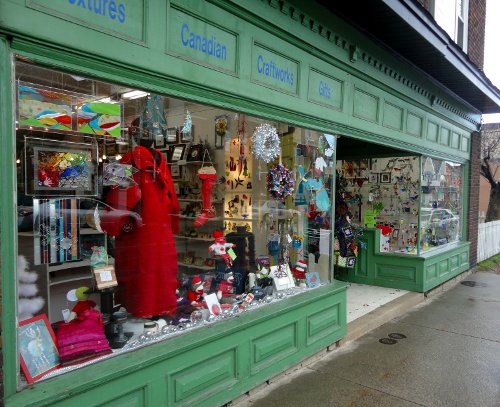 Decorative pieces fill the windows at Textures, an artisans' co-op 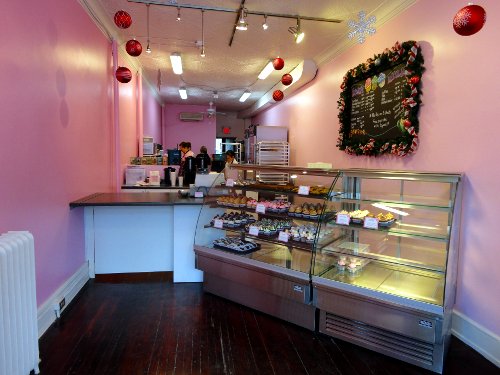 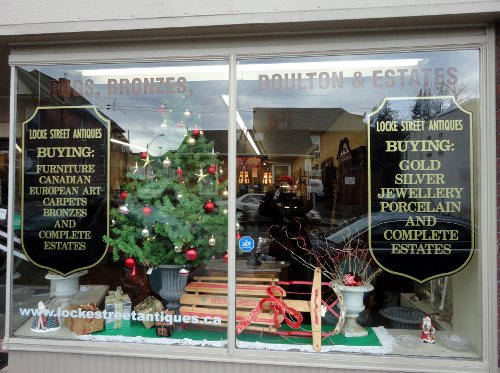 A Christmas tree in the window of Locke Street Antiques, one of the last remaining antique stores 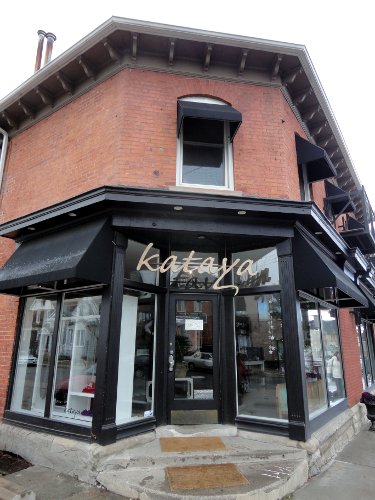 Kataya: don't be put off by the creepy hand doorknob. They have some great women's fashions designed in-house 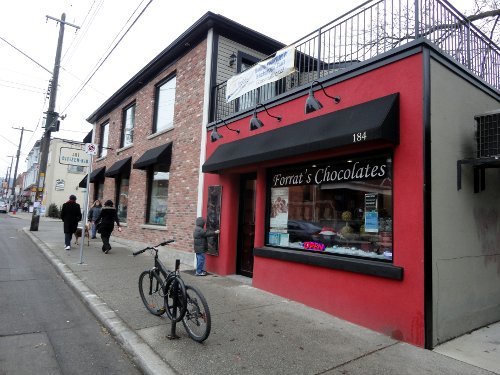 Looks like a pinko cyclist is buying some chocolate at Forrat's 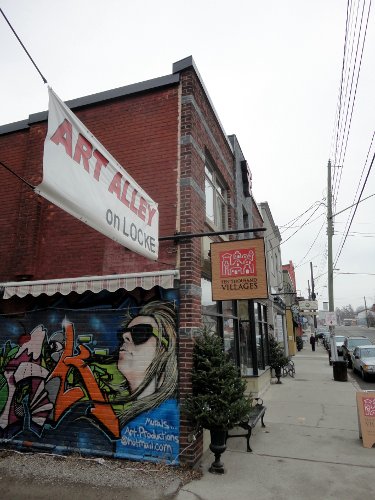 The Art Alley wraps around the side of Ten Thousand Villages 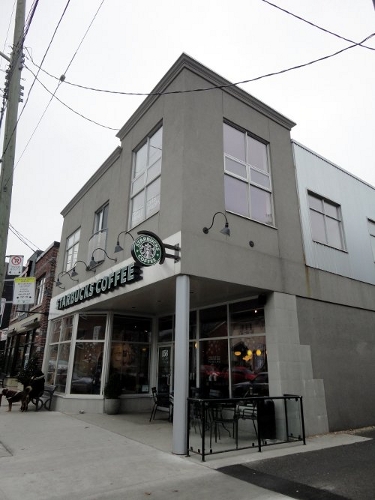 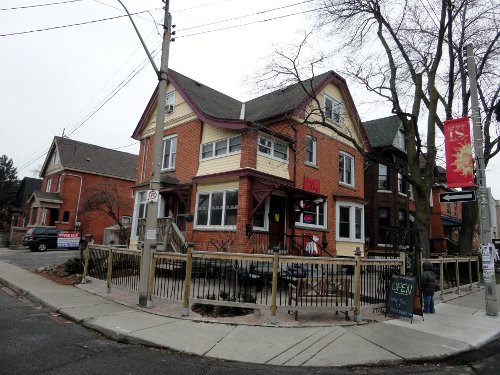 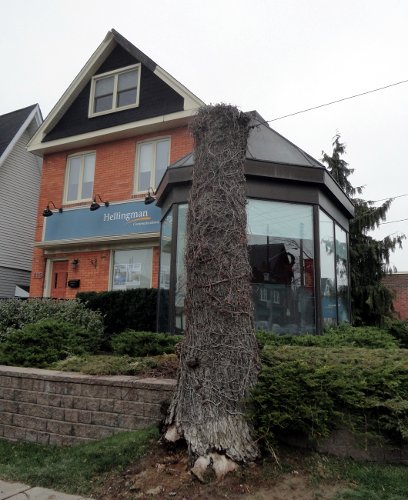 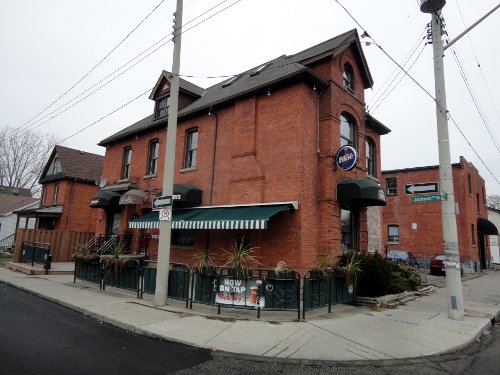 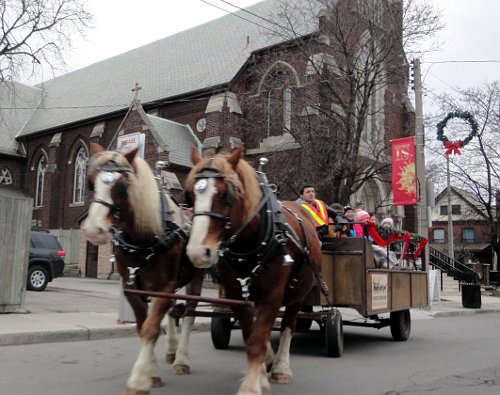 The past two Saturdays, a horse-drawn carriage has taken people-watchers up and down the street 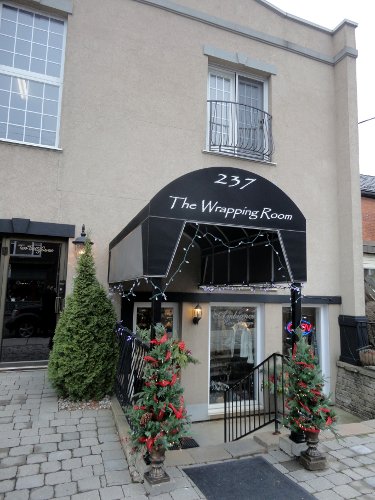 Decorations line the front pillars of the Wrapping Room 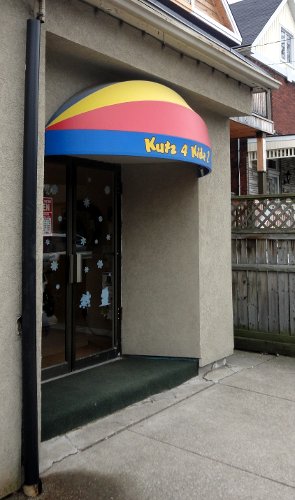 Kutz 4 Kidz is in on the decorating action 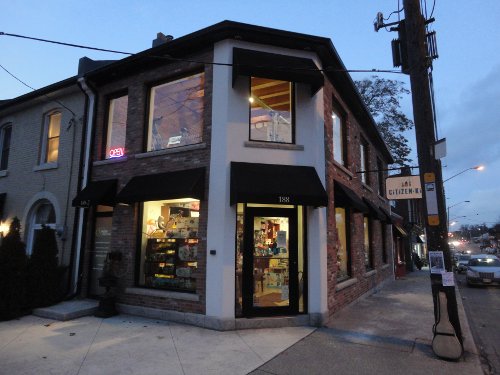 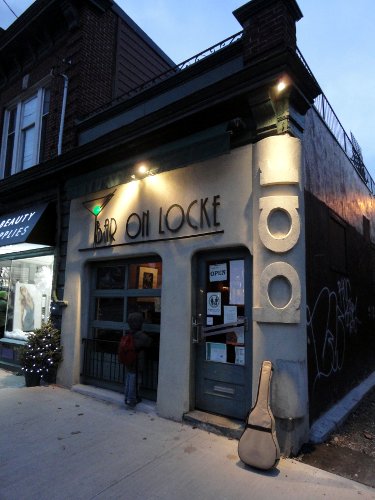 The Bar on Locke comes to life 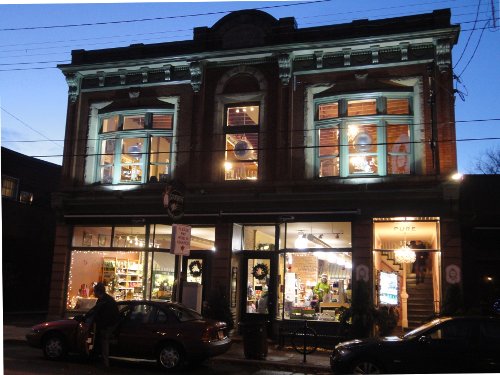 Lights blaze from Goodness Me, downstairs, and Pure, upstairs 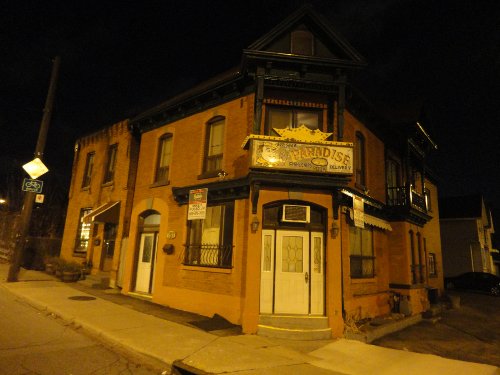 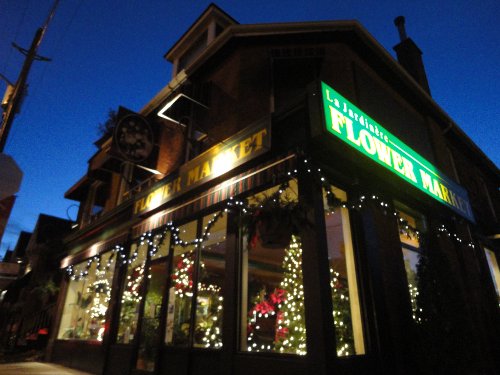 The decorations at La Jardiniere are best appreciated at night

I took a friend to Locke Street this summer to show her what another BIA had accomplished; she was amazed at the breadth of the various boutiques.

I lived there late-80s/early 90s, so remember an even older version of the street. I'm so glad it's progressed from 'Antiques Alley', because it's always held so much potential, especially given its history.

I still sigh when I walk past where the Regent Cinema used to be...

great tour...you need to go snap these pics again now with the snow!
mystoneycreek, just to clarify, the Locke BIA is brand new and only encompasses a few blocks at the south end of the street. The street was revived without a BIA, largely by the hard work of it's merchants and merchants association. Cheers

Oh, believe me, I'm fully aware of the goings-on regarding Locke Street and the BIA and competing interests...far more than most. I happen to believe in Merchants' Associations, but currently side with the notion that government involvement in BIAs is fraught with unbelievable pitfalls, and the interests of just about any 'high street' are best served by those who are actually doing the work, the business owners themselves and not Council. I hope this will serve as clarification...though it's interesting how the mere mention of a BIA in my comments sets off alarms. Funny, that.

Don't forget the multiple churches on Locke Street, available to anyone who wishes to celebrate Christmas with liturgy, beautiful music, and classic decorations. My own church, St John's Anglican (Rock on Locke), hosted an outstanding big band jazz concert last night and will have traditional Lessons and Carols on Sunday at 7pm. http://www.rockonlocke.ca/

Personally, I have been really glad to see the overabundance of hair salons on Locke be tempered by the variety of the newer stores.

Also worth noting are the plans to renovate the playground area of St Joseph School, with the intention of making a true community space. Details can be found at http://greentuxproject.wordpress.com/abo...

mystoneycreek, jason, please elaborate on BIA issue. I'm not very familiar but always suspected BIA was just another tax, supposedly for beautification plus anything organizers can scalp off. WHat do owners do if they can't afford the surcharge? How much is a typical surcharge/ how does it work? Also, i've always wondered if BIAs (or merchant assns) on one street just rob from other streets to boost their own - which possibly infers that all BIAs should be abolished????

Ottawa Street is closer to me & Merulla said he's trying to get something going on Kenilworth. Barton beautification didn't seem to do much, but i bet it cost a bundle. I can't see BIAs working on just any street but will be interested in any opinions on the subject.

umm, you forgot the gun shop.

The West Town is good.

I'll be spending Xmas here at Kandahar Airfield, Afghanistan. Thanx for posting these pics; I'll be sure to look at them again during the season. I've been reading RTH posts on a regular basis since I arrived here. Much better than the Speculator for coverage on relevant local issues. 10 more weeks till I'm home!

Great to hear from you Mattc. Have a blessed Christmas and stay safe! We appreciate your service.

Is there a decent business directory of the stores and shops in these BIA's? Something that sorts by product offering or description?

I'd definitely prefer to, at least more often than not, shop for clothes in downtown shops.

And, while it could be that I'm a picky shopper, finding casual/ cool/contemporary-yet-affordable styles for guys not very easy. And when time is of the essence, browsing streets is tough.

(Keep in mind that not all business on Locke are included here...)

I live on Locke as it happens, only literally at the very end on the north! by Dundurn Castle

Must sa,y the south end is much nicer but the whole street - stem to stern - is quite lovely!

I can't wait for the waterfront pedestrian bridge from the north end of Locke to the waterfront trail. I'll be a 5 minute walk to the waters edge. Sean, you'll be even closer. I love living up at the north end near Victoria Park and Dundurn Park, yet being close enough to walk to the shops at the south end.
Would be nice to see the stretch between King and Main have some traffic calming in the form of only 1 traffic lane, 1 parking lane and 1 bike lane along with a flex zoning that could allow commercial uses to spread north (as if. This is Hamilton....)

Much thanks! This is a really nice site. Represents the neighbourhood well. Hope more are doing that.

Womens footwear and accessories from all around the globe: Italy, Spain, NYC, Montreal

DEFINITELY worth comming down to Locke Street For!!!

when, oh when will we get a Pho restaurant on Locke? Is it too expensive for that sort of thing?? I've heard rumblings that a good sized condo project/ mixed use building is planned for the old Asian grocery store near Jackson. Would be really nice to fill in that spot and bring some of the good vibes closer to Main St, which is pretty thin right now other than Beasleys and the Mexican place.

Don't forget Simply Zen, an Awsome store across and up a bit from Starbuck an especially great place to check out for ecofriendly items this holiday season. Next to Zen there is a new dog boutique for dog people!

Regarding Locke St BIA there are actually 2 orgs here Locke St BIA from Chatham south and the older Locke St. Merchant's Association whose turfs primarily Chatham northward. When looking online check out both for a fuller listing of shops on Locke.

Oh, yeah... I know all about the history of The Regent. In fact, I have a friend who at one point...long ago...was a member of the Jehovah's Witnesses congregation that worshipped there.

If I won the LottoMax prize this week, believe me...

(Yes, I'm a dreamer, and yes, I do believe in the seemingly old-fashioned concept of 'nabes', or neighbourhood, single-screen cinemas. Such as The Fox in The Beaches in Toronto...)

Who knew our editor was pretty sharp with the shutter finger?!

Great photos Ryan. I first set eyes on Locke St in 1987 when I met my soon-to-be in-laws on nearby Bold St. It has greatly improved since then but its essential character seems intact. The main anchor then I think was a store called Ripons [?]. The gun shop where you could pick up your Glock was there then I believe.

This is a great post Ryan. As you know, my family moved down to Locke in the last year and just love it! All we need is a skate park on this end of town and my 3 boys would never leave!