Walkability and Transit Are Key To Hamilton's Economy

A report commissioned by the Chamber of Commerce finds that "walkable environments should be viewed as economic infrastructure that attract employment and should be invested in accordingly."

The Hamilton Chamber of Commerce recently released a report, Walkability and Economic Development, which was prepared by the Centre for Community Study.

The report analyzes walkability and transit accessibility as they relate to the location and growth of creative industries in Hamilton. It contains fascinating insights and should serve as a clear wake-up call to Hamilton's urban planners.

Creative industries are one of six sectors central to Hamilton's economic strategy. There are six sub-sectors contained within this sector, namely design and digital media; film, video and broadcasting; music; visual arts; performing arts; and festivals and events.

The sector is economically significant, both provincially and locally. According to the government of Ontario creative industries are responsible for $12.2 billion of Ontario's GDP annually, which is "now larger than Ontario's energy industry, is approaching 70% of the auto manufacturing sector and surpasses those of agriculture, forestry and mining sectors combined."

To put this into perspective, the total job growth downtown for this period was 330 jobs. Creative industries account for more jobs downtown than non-profits and NGOs (1,160), education (1,050), and manufacturing (530), and for the same number of jobs as healthcare and social services (2,005).

In other words, "creative industries are a significant and rapidly growing economic sector."

So what does Hamilton need to do to in order to see continued, robust economic growth in creative industries?

We need to build neighbourhoods with two key characteristics.

Walkable And Well Served By Transit

Those two key characteristics are walkability and a high level of public transit service.

Walk Score uses a patent-pending system to measure the walkability of an address. The Walk Score algorithm awards points based on the distance to amenities in each category. Amenities within .25 miles [0.4 km - Ed] receive maximum points and no points are awarded for amenities further than one mile [1.6 km - Ed].

The report assembles walk scores for each of Hamilton's neighbourhood planning units (NPUs) by measuring the walk score for the location at the center of each NPU. Using these walk scores, the NPUs are categorized according to Walk Score's four classifications: a score of 90 to 100 is a "Walker's Paradise" where "daily errands do not need a car", 70 to 89 is "Very Walkable", where "most errands can be accomplished on foot", 50 to 69 is "Somewhat Walkable", where there are "some amenities within walking distance", and 0 to 49 is "Car-Dependent".

These NPUs are displayed on a map, and creative businesses are plotted on top. 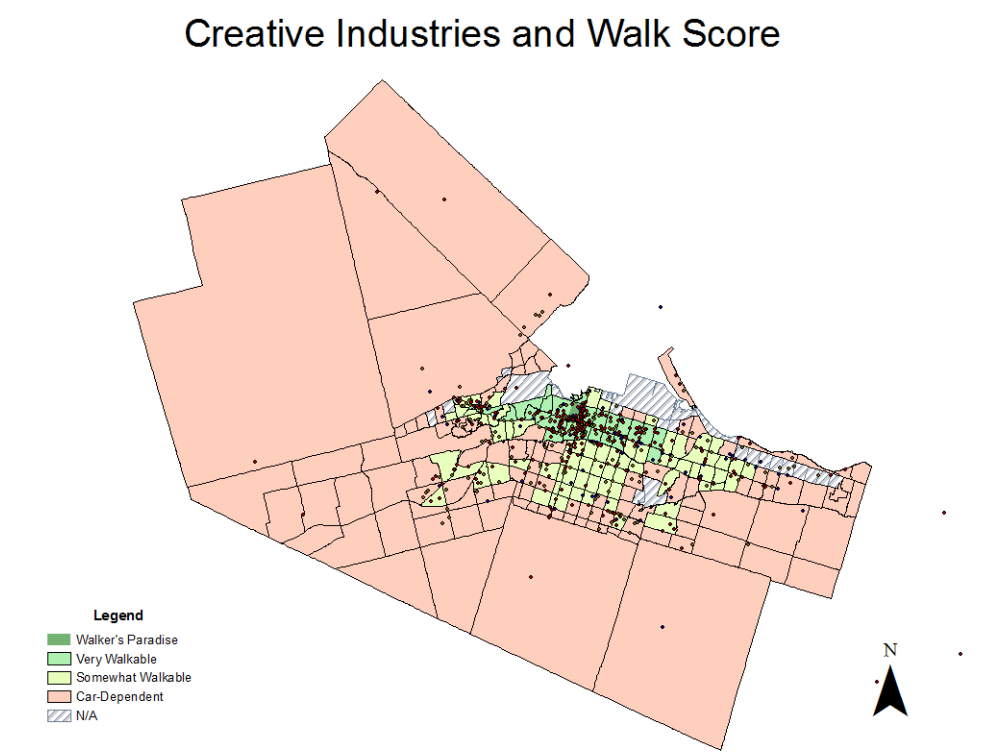 As you can see, the correlation is unmistakeable: creative industries overwhelmingly favour walkable neighbourhoods.

The report also shows the importance of transit to creative industries. Using similar methodology to walkability, the report overlays creative industries on a map displaying the city's NPUs, classified according to how well they are served by public transit. 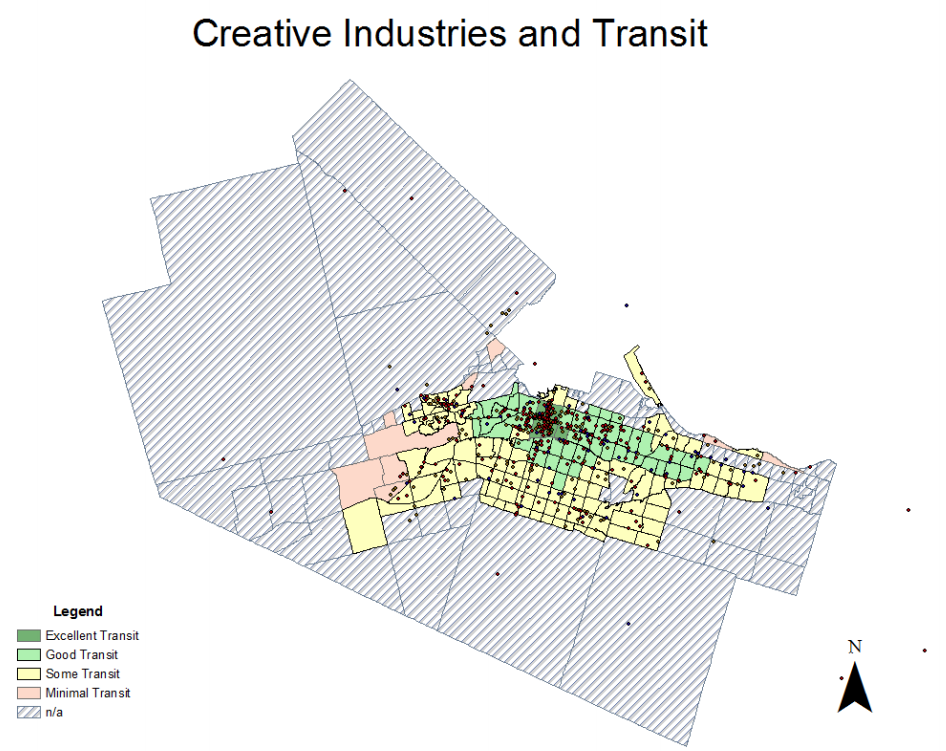 Again, the correlation is obvious: creative businesses locate themselves where they are well served by transit.

Creative industries are the downtown's fastest growing economic sector. Between 2010 and 2011 these industries created 320 jobs, almost double the number of jobs as the next fastest-growing sector, education (165 jobs).

In the same period, downtown Hamilton saw a decline in the number of jobs in government, retail & entertainment, finance/insurance/real estate, and manufacturing. In fact, were it not for the 320 jobs the core gained as a result of creative industries, it would have gained only 10 jobs!

The report puts it simply: "walkable environments should be viewed as economic infrastructure that attract employment and should be invested in accordingly."

This means that just as investments are made to ensure suburban business parks have the required infrastructure to make them centres of private investment, walkable environments need to be created, enhanced, and maintained in order to attract jobs for other sectors. Practically speaking this points to a whole host of planning issues ranging from pedestrian friendly urban design to intensification. The same can be said for transit accessible environments and this links directly with efforts at establishing Light-Rail Transit (LRT) across the lower city of Hamilton.

Now let's flip this around and ask a crucial question from a different angle: how much is it costing Hamilton - in terms of fewer jobs, more unemployed people, and a diminished tax base - to retain its walkability-destroying system of one-way, urban thoroughfares?

how much is it costing Hamilton - in terms of fewer jobs, more unemployed people, and a diminished tax base - to retain its walkability-destroying system of one-way, urban thoroughfares?

Bingo. This has always been my main point. We are sacrificing so much. Missing so much opportunity. Just so we can get across town 2 minutes quicker. King used to be our retail backbone, and can be again...James is proving that these old street walls can sure be cleaned up and given new life. Imagine the years of renovation, construction and new business opportunities that could begin to take shape on King from the 403 to the Delta? Phenomenal that we're willing to sacrifice that entire stretch of our heart for a couple of minutes...possibly even less.

This is exactly what I utter to myself every time I drive across town. That's why Cooke's quote resonated with me so much. Thanks for articulating my inner thoughts for me.

There may be an underserved transit market in the old city, but in the age of regional integration, it remains to be said that we've done a lousy job of bringing skeptics around. The report reveals a poverty of transit in almost everywhere but the lower city. Proportionately, I don't know if transit mapping would have looked significantly different in 1950.

The whole creative industries math is another kettle of lutefisk. As with the ineluctable magic of two-way streets, there's a great deal of ambiguity around causality and hence EcDev arguments. What other sector of the economy saw such lavish tax incentives strewn about? What other trope seized the media's imagination as surely as "Art Is The New Steel"? Cultural vitality makes a city more vibrant. There are excellent reasons to convert various streets from one-way to two. I'm not convinced that creative industries are the golden ticket is all. (Google "Creative Placemaking Has An Outcomes Problem" for starters.) Walkability is beneficial to all and should be appreciable by all. If it's about serving the needs of bohemians whose raison d'etre is catalysing real investment, that strikes me as a problematic rationale. Two cents.

I understand your point, although I don't think we're talking about the "needs of bohemians" here. For example, the creative cluster includes companies classified as "design and digital media", which encompasses a lot of people and a lot of companies that are rather different than the bohemian stereotype. And I would be pleased if there were indeed lavish tax incentives for this kind of business, but there are not.

That aside, artists and artistic companies have been an enormous part of the urban renewal we've seen on streets like James North, and their contribution can't be minimized, both in terms of economic activity, shifts in public perception, and direct action like purchasing and renewing buildings in the core. It's "Art Crawl", after all, not "Design and Digital Media Crawl".

Walkability is beneficial to all and should be appreciable by all.

I agree with you, of course, but council doesn't really listen to this argument. They do, however, listen to economic arguments - at least, one can hope.

My intention was certainly not to slight or minimize the impact of artists and artistic companies on Hamilton neighbourhoods like Locke South or James North. I was perhaps unduly pithy with my "bohemians" remark. My point was more that the chemistry, the so-called "recipe for success" is far more complex than we commonly acknowledge.

"Creative Induustries" is certainly a valid and vibrant part of our city's economy, and it's still a fairly new part of the EcDev portfolio, but the city needs to take it seriously as an economic generator. EcDev could do worse than emulate the approach adopted by InvestToronto and Toronto Board of Trade as a starting point.

My intention was certainly not to slight or minimize the impact of artists and artistic companies on Hamilton neighbourhoods like Locke South or James North. I was perhaps unduly pithy with my "bohemians" remark.

No worries, I hear you. Tone is notoriously difficult to establish on the Internet.

You're right on Adrian. Council will always be moved by an economic development/cluster spinoff. High quality of life for the masses simply isn't a priority that will see real change take place. Adding new jobs, tax revenue and better economic performance absolutely will. I'm pleased the Chamber commissioned this report. Let's hope it gains traction at city hall.

After hearing a speaker at On the Cusp state that if it didn't exist downtown, she didn't buy it, it got me thinking...

If we removed the across town mini-highway, replacing it with two way streets which suburbanites claim to be needed to get cross town or they wouldn't go (yes I have heard some say that) then wouldn't it open up opportunity for more businesses to open locally to them?

I was booked up and didn't make it out, but that's gotta be former International Village BIA Executive Director Mary Pocius.

It most definitely was Mary Pocius.

Seeing as cultural industries have been incorporated into the six-prong EcDev jobs strategy, it should be easier than ever for the creatives to make this happen. It's just a math question, one that EcDev didn't need the Chamber to make (why else would they have absorbed the Tourism/Culture field if not because they saw unexplored potential for economic development synergies).

If there's substantial ROI in the offing, it's an easy sell. If we're not quite there yet, we'll learn where the tipping point is seen to be by those with their hand on the faucet. At worst, we will learn that the sector is only being used as a fig leaf.

Astounding. If it wasn't for the creative industries, Downtown Hamilton would have posted a net increase of 10 jobs during all of 2011.

I seem to recall a story using 2006 Census info that apparently showed 70% of GTA commuters driving to work.

Would be curious to find out what the comparable stats are for Hamilton's downtown jobs. My guess is that we're even more car-intensive.