We need to challenge opponents to produce evidence that supports their speculative claims against making our streets safer and more accessible to everyone.

In recent weeks and months, I've had many discussions with planners, policy makers, advocates and interested citizens about Complete Streets - streets "designed for all ages, abilities, and modes of travel".

As we push to make more of our streets, including Cannon Street, work for all road users, I've been encouraged by the amount of conversation around Complete Streets that has been taking place, including several articles posted posted here on Raise the Hammer (see here, here and here for examples). We are also seeing more and more municipalities move toward adopting these policies because they realize the economic, social and health benefits of making a city more walkable, bikeable and liveable. 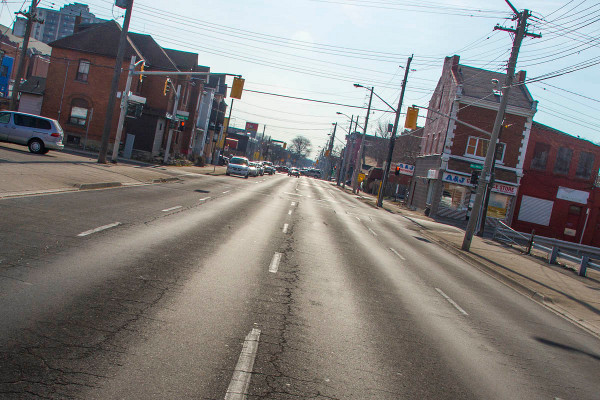 Yet despite all of the overwhelming evidence that shows just how beneficial adding things like wider sidewalks, bike lanes, pedestrian promenades and other active transportation infrastructure can be, we remain beholden to a minority of people who hold firm to their belief that "it can't work here."

When it comes to evidence for how something works, the strongest type of evidence is that which has been proven to work already. We've got that in spades when it comes to the benefits of complete streets.

Anecdotal evidence, while less strong, is often more convincing. So let me share some with you right now.

When I went to New York City, I felt safer walking and biking down the streets than I do here in Hamilton. I likely wouldn't have spent any time or money at all in the neon-clad, excessively consumerist Times Square, but because of the pedestrian plazas and seating there, my wife and I did sit down for a coffee and a rest while we were there.

We spent much more time and tourist dollars in neighbourhoods where we could walk and bike safely to get to where we wanted to go.

Here's another anecdote. I'm a driver as well as a cyclist and a pedestrian. I have never once felt that a bike lane on a route made my journey in a car longer.

I drove Jarvis Street in Toronto at rush hour once while it still had its ill-fated bike lanes, and once without them. I didn't notice a lick of difference.

I also cycled on that street on my bike, with and without bike lanes. I can tell you that without those lanes, I slowed down traffic much more, because the only way for me to feel safe was to exercise my legal right under the Highway Traffic Act to take the lane to avoid being passed within inches of being hit.

I have also walked on Jarvis, again, both with and without the bike lane, and the feeling of separation from traffic granted by a bike lane makes the sidewalks feel much safer and more enjoyable as well.

(According to a City of Toronto study, bike trips increased to 10% modal share, overall collisions dropped 23% and the rush-hour driving commute went up only 2 minutes while the Jarvis bike lanes were in place.)

Opponents are relying on speculative anecdotal assumptions - things that they think might happen despite all evidence to the contrary.

They make claims like saying that adding bike lanes will slow down traffic and result in gridlock, despite the fact that the evidence has shown many of our streets are grossly over capacity and removing lanes would certainly not result in anything that even remotely resembles gridlock.

They claim cyclists will continue to ride on sidewalks anyways, despite the evidence that shows that in every municipality where cycling infrastructure has improved, cyclist compliance with the law has increased dramatically.

They claim people won't get out of their cars, despite all evidence to the contrary, including a recently released poll that shows that 69% of Ontarians would prefer to cycle more.

In short, the opponents of Complete Streets rely on nothing but false pretenses and speculation, so I say we need to start switching the onus.

From now on, when a person makes any of those claims, I ask all Complete Streets advocates to kindly request that their opponent produce one concrete example to support their claim.

Ask them to show you one jurisdiction where making a city more walkable, bikeable and liveable didn't result in economic revitalization, where gridlock dramatically increased, where cyclists continued to ride on the sidewalk despite a safer network of cycling infrastructure, or where the number of cyclists didn't increase.

I've been working in the field of active transportation for almost five years now, and I haven't come across a single example. I'm not saying there aren't any out there - but you will have to dig pretty deep to find them.

And maybe, just maybe, when these opponents of Complete Streets start seeing the hundreds of examples of municipalities that have benefited from making their cities more liveable, they'll be willing to look past that one example of one that didn't that they finally managed to unearth.

I'd be interested to hear if anyone out there has any examples of cities that provide evidence to the contrary - if you have them, please share them. If not, then let's stop the argument once and for all and get on with making our city work better for everyone, not just for those in cars.

There seems to be widespread consensus on the desirability of better streets. The City mainly lacks the political will to lock down the resources to make it happen. Something like 40% of the city's capital budget is going to roadwork this year, so it's not that we don't have the money. We just want to spread it thinly. Maybe Hamiltonians need to assure their councillors that quality is more important than quantity.

There is no political cost for maintaining the status quo. Doing nothing is always the political path of least resistance.

I walk to work downtown using John St. North. Now that Wilson St. is two way, or as Ryan calls it " TWINO two way in name only", the intersection at John and Wilson is much more dangerous for pedestrians. Traffic is coming from all directions and drivers are looking first for the gaps to turn, then for pedestrians. When I saw Jason's photo of a complete street in a recent article, it dawned on me that Wilson could be turned instantly and easily into a complete street! The westbound single car lane would make a perfect protected two-way bike lane. The cycle lane would be on the eastbound driver's side for good visibility and the street lights are already in place. Put curbside parking on the south side and voila, a complete street all the way to Bay street right through downtown. Same thing could be done easily on Cannon.

I agree re:Wilson. And this is why we need to take a closer look before just converting streets to two-way. Portland and Montreal have cycling advocates asking for conversions TO one-way in order to make more room for protected 2-way bike lanes. The protected lanes installed on a two-way street in Montreal are the narrowest and most complained about by cyclists. Now, Wilson has such light volumes I've thought that we should do your idea but leave it 2-way with NO turning lanes. I'm tired of this city's obsession with turning lanes. This isn't Ancaster. As you've said north lane can be two way cycle path, then 1 WB lane, 1 EB lane then curb parking. And IF the odd signalized intersection is busy enough to warrant a left turn lane we can create it by veering the eastbound travel lane towards the curb in place of parking at those intersections. Only ones I can see being needed are Victoria, Sanford and Sherman.