It is past time for Council to stop this demolition and start exercising its legitimate civic powers before yet another property speculator destroys yet another irreplaceable part of the City's built fabric.

Today, Wilson-Blanchard has begun to demolish the buildings at 18-28 King Street East. The east-west alleyway that runs behind the buildings is fenced off and an excavator is in place to begin demolishing the buildings. 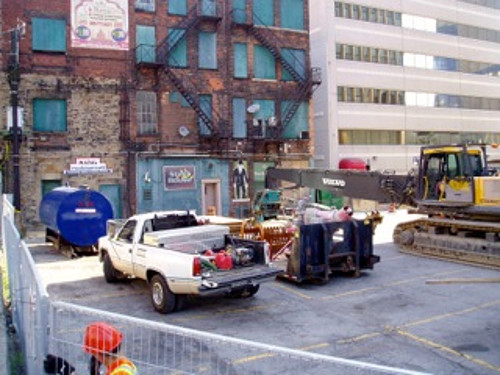 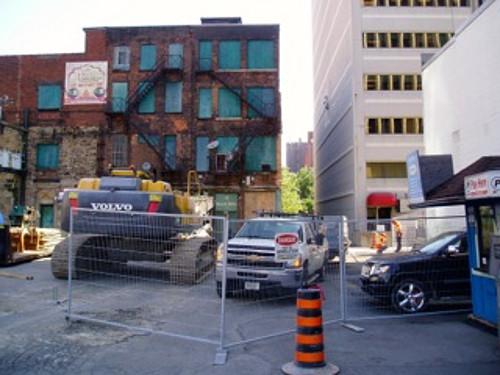 Just a week ago, David Blanchard agreed to hold off on demolition in an attempt to reach a compromise with the City to preserve some or all of the heritage features of the buildings, which date from the 1840s and 1870s.

Now Wilson-Blanchard representative Robert Miles is claiming that the agreement only applied to the facades, and that the company is honouring the agreement by dismantling the facades by hand and saving the bricks.

Wilson-Blanchard and the City also agreed that the City would conduct an independent audit of an engineering report the property owner had prepared for the buildings. It is not clear whether the demolition of the rear portions of the buildings will render the facades and front portions structurally unstable.

City staff recognize the heritage value of these buildings but they are not designated under the Ontario Heritage Act. As always, Council has the legal power to protect the buildings from demolition by issuing an intent to designate them under the Act.

Until now, however, Council has been deeply reluctant to exercise this power, despite the proven economic and social value of heritage preservation.

The Ontario Minister of Tourism and Culture, Michael Chan, can also intervene to stop the demolition (as previous culture minister Caroline DiCocco intervened to save the Lister Building from Council's short-sightedness). However, despite being asked to get involved, Minister Chan has not taken action.

Wilson-Blanchard does not have a plan to redevelop the properties it has assembled on the block bounded by James, King, Hughson and Main Streets over the past two decades.

This is beyond outrageous. It is past time for City Council to call an emergency session, stop this demolition and start exercising its legitimate civic powers before yet another property speculator destroys yet another irreplaceable part of the City's built fabric.

Update: Ward 1 Councillor Brian McHattie and Ward 2 Councillor Jason Farr have called an emergency meeting with Wilson-Blanchard at 3:00 PM today, and will provide an update after the meeting.

Update 2: The demolition has been put on hold again. Please see the follow-up article explaining the details.

What a f$cking disaster.If a Legion Hall or a bingo parlor or a payday loan building was under threat. there would be a heritage designation in a heartbeat. Even if the buildings were built 10 years ago.

Yes, I know that's ridiculous. But Hamilton is "governed" by spineless idiots, and is run by developers. These guys out-think and out-gun our elected officials every day of the week.

The slogan for a Hamilton sign? "Welcome developers. We can be bought!"

There's got to be more going on behind the scene. This rush to demolish makes no sense whatsoever.

Downtown Councilor with whom owner has an agreement to hold off on demolition is on vacation? Check.

Enough fuel on site to complete the entire job? Check.

Fuel supply is on private property inside cordon, in case of spontaneous action by frustrated citizen stakeholders? Check.

Local independent journalist is on short hiatus from his indefatigable reporting of local news to have a few hours of r and r. Check (probably just serendipity, that one)

Work scheduled to commence on weekend when City Hall and various provincial ministries are closed? Check.

Say what you will about this group and their plans for the site, but they certainly know what they're doing.

Apparently, their current demolition permits were due to expire in early August, and so they are likely rushing to demolish just in case they have problems renewing the demolition permits. Of course, they knew when the permits would expire when they promised Councillor Farr just last week they would not proceed with the demolition "in the near future". Clearly, that agreement was a ruse to make it easier to start this surprise demolition just when the citizens of Hamilton thought a truce had been negotiated.

In case anyone has forgotten, here is Farr's press release from just nine days ago announcing the "good news". It is pretty hard to reconcile what is happening with "Councillor Farr requested and it was agreed that any demolition would be stopped"!!

July 9, 2013 – Hamilton, ON - Early this afternoon, Councillor Jason Farr, Mr. David Blanchard and his representatives, city staff from Planning & Economic Development including Heritage Planning, as well as staff from the City Manager’s Office met. At that meeting Councillor Farr requested and it was agreed that any demolition would be stopped on the 24, 28 King St. Gore Park buildings as a solution is sought to maintain the architectural and heritage character of the Gore properties. This interim step allows time for continued community input, as well as dialogue between Mr. Blanchard and city staff.

Furthermore, staff has also requested that an independent peer review be done of the engineering report undertaken by the owner of these properties as an immediate next step.

“I want to thank Mr. Blanchard for his willingness to seek a solution”, said Councillor Jason Farr. “There has been a significant focus on citizen input and engagement the last little while and it is important that it be considered in our decision making process.”

“Gore Park is important to this entire community. I remain committed to finding a solution that allows us to maintain the architectural and heritage character of Gore Park while also trying to move forward with this exciting project,” added Councillor Farr. (End of press release)

If nothing else, Council has to re-assert their authority. They have the ability to force Blanchard to honour his agreement and they need to follow through!

What agreement are you talking about , Ohh the demo perment i guesse he is following trough it take them down Blanchard there a sore eye in the core

IS THERE AN IGNORE FEATURE ON THIS SITE YET?

Cut the fake illiteracy act. You know damn well Blanchard agreed just last week to NOT demolish the buildings or maybe you also pretend to not be able to read.

So much for the "charade" you thought was happening. I guess they weren't after the people's money either. I think they do have a plan and they are sticking to it. the City and their agreement seems like a stall tactic by the city to appease certain people, hoping the permit would expire before any solution is found. I think we all know there is no way the City would have extended their permit with all this media attention. Perhaps the councillor should have spent the last week finding/ensuring a solution instead of a holiday, knowing the deadline was approaching.

By Monday there will be no sign of those buildings other than the hole in the ground. There is a reason they are doing this on a Friday afternoon.

The Spec states that the one permit expires in less than a week...there is your reason. All city has to do is extend it and the rush will be off.

Ok all yu cowards, who act as out so called leaders, let me say, you all stink to high heaven. The Spec does not do real reporting, so why even mention them!

Our heritage, our past, too bad we cannot see where the money trail really goes!

Arevolution is needed, when will the sheeple wake up??????

A revolution may very well be needed but I wouldn't count on it saving heritage buildings for you. I mean are we talking local revolution? Global Revolution? Symbolic? Hyperbolic? Velvet maybe???

These are busy times for Mr. Blanchard. Earlier this week, he started cutting holes for nine windows in the north wall of the Pigott Building, but didn't bother mentioning it to the condo corporation --- which owns the building!!!

Did you talk to your manager of your condo? Just curious, were the windows put in the condo portion of the building or the commercial portion? Are they separately owned?

Blanchard simply leases commercial space on the second floor of the Pigott, where he's installing the windows. He doesn't own the building. The condo Board was given no notice at all of his plans to cut holes in the building's walls.

It use to be Blair,Blanchard and Stapleton, I wonder if all those involved know the present history?

It is so sad, that one individual, wins. HMMM, what if the guillotine, come back into fashion, what would happen.

Really...you think it is just one person. Do some research.

Time to occupy the site.

That parking lot will be there FOREVER.
Congrats Jason I hope your having a good vacation while Gore burns ......

Anyone else concerned that the lawyer representing Wilson-Blanchard, Tim Bullock is on the Downtown BIA Board and is a past chair?

No wonder the Downtown BIA and Kathy Drewitt has been noticeably quiet on this whole thing...