How Legal Liability is Determined in a Driver-Pedestrian Collision

Legal liability assessments in the case of collisions between drivers and pedestrians indicates that the City's policy of neglecting uncontrolled crosswalks is not legally sound.

For many years, the City of Hamilton has steadfastly refused to provide safe and convenient pedestrian facilities by using the argument that these facilities, such as crosswalks without associated stop signs or traffic lights, open up the city to potential liability from pedestrians who might be injured using the facility.

The most infamous example of this thinking was the decision, over a decade ago, to remove the signs from unsignalized designated pedestrian crosswalks and allow the painted lines to gradually fade away over many years. 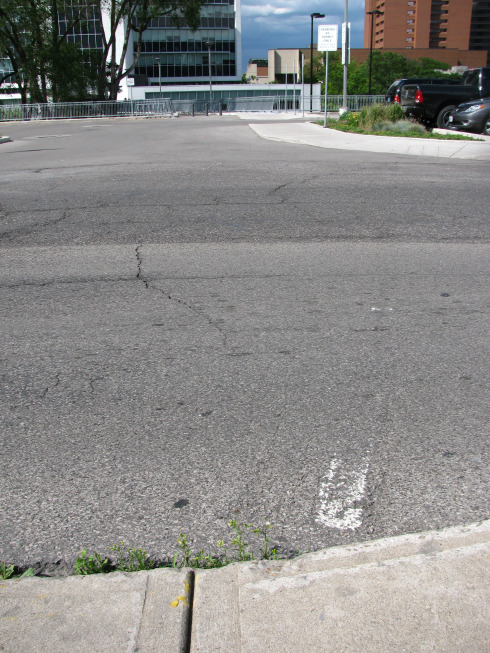 The fact that Hamilton has the second worst rate of pedestrian injuries in Ontario gives the lie to the claim that this decision has somehow made the streets safer for pedestrians.

Liability for the City

There remains, however, the argument that even if refusing to designate crosswalks at uncontrolled intersections makes walking more dangerous and less convenient, it at least avoids a significant liability risk to the City.

It would be helpful if the City's Legal department actually engaged in an open discussion about the reasons for their opinion regarding liability at non-signalized crosswalks, and why they think no signs should be posted for drivers reminding them of their duty to yield to crossing pedestrians.

Any such legal opinion is a particular interpretation of the law and assessment of relative risks and benefits, and involves value judgments that should be influenced by public debate.

This discussion could include: citing particular parts of the Highway Traffic Act and Regulations, relevant jurisprudence and precedent, and insight into how the lawyers weight the risk of liability to the City against the duty to provide safe and convenient infrastructure to pedestrians (while supporting the City's official goal of promoting walking and a recent Ontario Coroner's Office report on pedestrian deaths).

Until we hear from them, this slide presentation by Frank Devito [PDF] of the Toronto law firm Beard Winters LLP provides some guidance. I should emphasize that IANAL, and would be interested in hearing comments from lawyers on this discussion.

Devito's presentation addresses precisely the issue we are interested in: pedestrian and driver liability in the event of a collision:

I will quote some salient passages, and then draw some conclusions for Hamilton.

In summary, pedestrians legally crossing mid-block at "designated crosswalks" or at street intersections have much higher rights and consequently higher legal protection than pedestrians crossing elsewhere.

Hamilton is proposing new "courtesy crossings" for currently uncontrolled street intersections which are therefore locations where pedestrians (in principle) already enjoy higher rights and motorists have a higher duty. (The Toronto style PXOs with overhead lights are intended primarily for mid-block crossings.)

The City's Legal department recommends posting signs that read, "Caution - Vehicles Not Required to Stop" but this wording has not been finalized yet.

Over decades, Hamiltonian motorists have come to ignore their duty to yield to pedestrians crossing legally at intersections. Therefore, the key to enhancing pedestrian safety at these new "Courtesy Crossings" is to make it clear to the motorist that they are approaching a pedestrian crosswalk and that it is an area where they should be on the lookout for pedestrians.

With respect to municipal liability, it would be very difficult for a motorist to claim that they didn't know that an intersection painted with a zebra crossing and a sign saying "motorists must yield to crossing pedestrians" was a pedestrian crosswalk (and, in any case, it is still a "regular street crossing").

It is important to remember that many (perhaps most) other Ontario municipalities have continued to designate even mid-block crosswalks with signs and painted lines, just like Hamilton did up to a decade ago.

Having such crosswalks at intersections, where motorists already have a duty to yield to crossing pedestrians, should not be a problem.

Adopting a new, even clearer, zebra crossing + "motorists must yield to crossing pedestrians/watch for traffic" McMaster/Mohawk type sign would be even better. It would definitely make walking safer and more convenient for pedestrians and remove confusion for motorists by reminding them exactly what their duties are.

The current policy of not including crossings, except where motorists already need to stop, sends the opposite message.

Finally, nowhere in the presentation did the author mention anything about liability for the municipality, even as as a separate issue. All cases considered how liability was divided between the pedestrian (plaintiff) and the motorists (defendant).

Many more specific precedent examples on pedestrian/motorist liability are given at http://carl-wais.com/blog/?p=105.

I've always wondered why Hamilton has never adopted the push button - flashing crossing light (yellow x sign) that Toronto uses at intersections with no stop signs at various intersections.. I've always grown up with pushing a button, point, and was on my way.. Once I was across, traffic carried on, all was happy!
Guess it's expense, but it should be used as it worked!

It would be interesting to compare other Ontario municipalities interpretations of 'uncontrolled intersections' to at least see if our Legal Department's opinion is common among its immediate peers.

Some quick searching found nothing clearly stated, but there does seem to be similarity's in the way Zebra Crossing use is mandated…

*"The Highway Traffic Act gives the right-of-way to pedestrians in the presence of and adherence to the following traffic control devices:

Unsigned intersections are not included, and later...

*"The following guidelines will be used to determine appropriate locations for Zebra Crosswalks in Brampton:

Zebra Striped Crosswalks will not be installed at locations without a traffic control device or at mid-block school crossings."*

By the way check out today's Dreschel Dreck if you have the stomach for it.

What, specifically, do you have a problem with?

I don't know about anyone else but I have a problem with the part where he takes an entire article to complain about "sleepwalking pedestrians and arrogant cyclists" right after a study came out finding Hamilton is one of the most deadly cities in Ontario to walk or bike in. Tacky much?

I've seen the article about the study, but I didn't actually see the study. Was there a link to the study itself?

The data presented last week to City council and to the media was a preview of an upcoming SPRC report. The deputation available on the SPRC website provides sources: http://www.sprc.hamilton.on.ca/2013/11/s...

There's no firm date for release of the full SPRC report yet, but should be in a few weeks.

Sara, Are similar statistics prepared for other cities in Southwestern Ontario? Burlington, Milton, Brantford, London, Oakville using the same formula as Ontario vs. The City

For example, in http://www.canlii.org/en/on/oncj/doc/200... the judge confirmed that "undelineated" crosswalks defined under s. 1(1)(a) are “portions of a roadway are marked for pedestrian use” where, if there are no markings or signs, the crosswalk is "marked" by the extensions of the sidewalks on either side of the road.

Hamilton is not unique in only putting crosswalks only at signalized intersections, and indeed it seems a fairly common guideline throughout the GTAH, however many municipalities outside the GTAH do not follow this guideline.

A clear and simple McMaster style sign would remind drivers of their duty to yield to crossing pedestrians at all intersections, and remind pedestrians to "watch for traffic" or "ensure motorists have time to come to a safe stop".

The current situation has meant most motorists are unaware of their duty to yield to pedestrians crossing at an unsignalized intersection, and yet pedestrians still need to cross. This leads to especially dangerous situations for the elderly, children and disabled (who are slower or have difficulty judging speed) as well as at busier intersections where it may require waiting an unreasonably long time for a gap so large that traffic does not have to slow down or stop to allow a complete crossing.

It wasn't made clear that Hamilton does seem to be following a common municipal legal interpretation of the Ontario Highway Traffic Act, not their own unique one.

"... pedestrians behaving negligently (e.g. an 8-year old running out from a playground after a ball)."

Wow! Talk about blaming the victim. Needless to say, that is perfectly normal 8-year-old behaviour and not negligent at all.

Negligence occurs if a car driver drives through a residential neighbourhood or near a playground at such a speed that the car driver fails to allow for perfectly normal, reasonable and expected child behaviour such as running out onto the road.

Such a car drivers is, of course, criminally negligent and appropriate criminal charges need to be laid.

i keep trying to wrap my head around this problem and how little concern there seems to fix this particularly destructive element in society. the best analogy i can come up with is imagining if car drivers were being injured and killed at the rate of pedestrians and cyclists by TRAINS. imaging if there were hundreds of uncontrolled unsignaled intersections that cars were forced to navigate daily with freight trains speeding by constantly. where motorists were routinely struck by trains and severly injured or killed? how much uproar would there be to solve that problem? would we still blame the driver for trying to drive around a city filled with trains? does not the city have a duty to create safe infrastructure to minimize the impact of the interaction between one mode of transportation which is inherently orders of magnitude more dangerous to another mode of transportation? should not the city act in all earnestness to protect that more vulnerable mode of transportation from the more dangerous?

That is an excellent analogy. It is absolutely exhausting how much the victim is blamed. Shock jock quality articles are quick to show up in our newspapers blaming everybody except the root causes. They are truly exhausting and sickening. This region is truly stuck in an Idiocracy right now. How will it play out? Hard to say. Suburban rage is a big problem in elections, and it's directed at the victims, not the root causes. The thought of living in Ford Nation almost makes me suicidal. I hope the renaissance of sane people continues to gather steam. Now if you'll excuse me, I'm on the run from the Brawndo people for recommending water on farm fields.