This project is a perfect opportunity to address gaps in bike parking while planning and building for bike share infrastructure.

For Hamilton cyclists, the holiday season started early this year. In the past few weeks, the good news about Hamilton's approval of a bike sharing program has been spreading far and wide.

Stories in Raise the Hammer, The Hamilton Spectator and CBC Hamilton have shared details on the approval of the 650 bicycle network.

Official approval came at the December 11 Council meeting, and the program looks to launch in Spring 2014. Building on the success of this past summer's Yes We Cannon campaign, which resulted in Council approval of a pilot two-way protected bike lane on a large stretch of Cannon Street, this Metrolinx-funded "Quick Win" will dramatically alter the Hamilton cycling landscape for the better.

Not only will the bike share program encourage non-cyclists to start exploring Hamilton on two wheels, but more importantly it will also set the stage for further improvements to Hamilton's growing cycling network. In short, the resulting infrastructure will be another step towards creating a safer, healthier, more livable and sustainable city.

Speaking of infrastructure, some may recall the #BikeParkHamOnt campaign I launched earlier this fall to seek feedback from Hamiltonians about gaps in our current bike parking infrastructure.

On the surface a seemingly boring issue, the campaign hit a nerve with those who get around the city on two wheels yet find it difficult to park their bikes in areas where car parking abounds. The result was a tremendous amount of online feedback about places that lacked the bike racks and corrals needed to support a growing culture of urban cycling, including:

So what does this have to do with bike share?

Traditional bike shares such as BiXi, used in other Canadian cities such as Toronto and Montreal, have bike parking stations built specifically for their own bikes. But one of the most innovative and exciting aspects of Social Bicycles, the company that won the bid to operate the new Hamilton bike share, is that the bikes have a more traditional style bike lock and GPS built in to them.

While there will still be 65 different bike share kiosks across the core and secondary service areas, the kiosks themselves are much less complex than the BiXi model. In short, they can be built to hold both bike share and privately owned bicycles.

Reflecting on the findings of the #BikeParkHamOnt campaign and taking a look at the Hamilton Bike Share Zones (see below), this project is a perfect opportunity to address gaps in bike parking while planning and building for bike share infrastructure.

For example, if a new kiosk were to have ten spaces for bike share, it could also have a few extra spaces for public bike parking. In cases where a bike share corral may only be able to hold bike share bikes (due to the land available), post and ring parking will be installed nearby.

This is a great opportunity to address an existing need in an efficient, cost-effective, and responsive process. The timing couldn't be better. 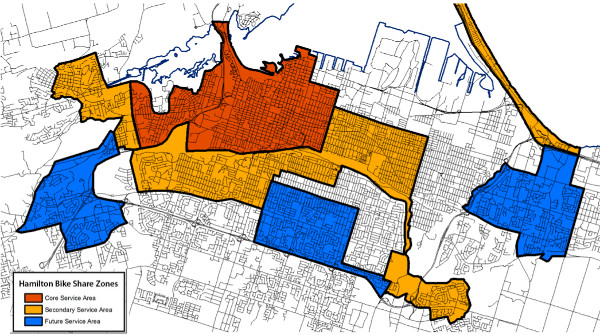 Now that the new bike share has been approved, one of the next steps will be to identify where stations should be located throughout both the core and secondary service areas.

I'll be providing all of the feedback that I received from #BikeParkHamOnt to a new audit mechanism as part of this process, ensuring that this information is put to good use by City staff when planning in the coming months.

Given that there is much work to be done in a short time, the #BikeParkHamOnt information will be extremely useful in the development of this exciting new project. In only a few short months we'll actually see the change as new bike parking infrastructure is installed throughout the Hamilton Bike Share Zone.

I would like to extend a big thank you to all of those who contributed to the campaign and especially would like to thank Pete Topalovic, Project Manager of Transportation Demand Management for the City of Hamilton, for being receptive to the project and incorporating results into City planning.

City of Hamilton staff are no doubt already busy at work preparing for a busy few months ahead. It is incredibly exciting to see citizen feedback being incorporated into the process and we're all set to benefit from yet another important step in the right direction of building a safe, healthy, and livable city.

While the City is busy at work on the bike share program, other developments from the #BikeParkHamOnt campaign also continue to gain steam. Some recommendations to come out of conversations that I've had with various colleagues since the campaign launched include: 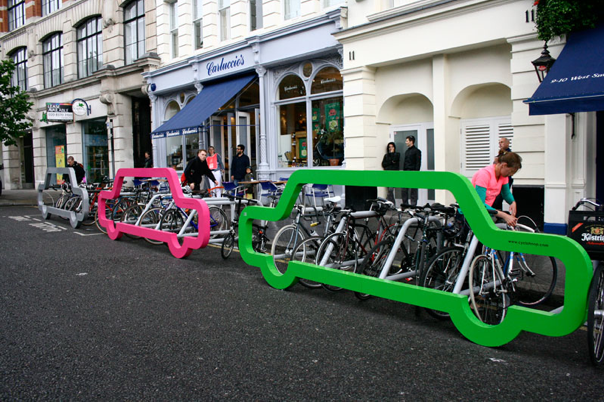 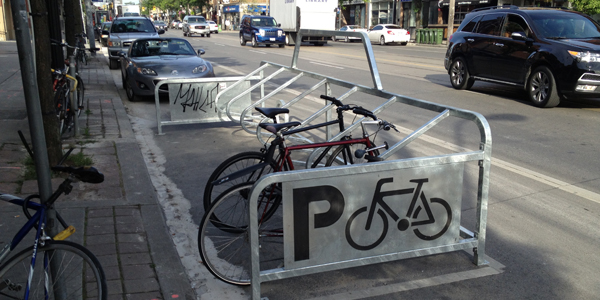 A bike corral on College St. in Toronto is a local example of what new bike corrals in high-density cycling areas could (and should) look like.

With the right people and organizations to think through the details, these ideas are easily doable. Combined, they reflect the desire of many within our community to foster the type of city-building that promotes safe, healthy, and livable neighbourhoods and communities.

As we slow down our busy lives in the coming weeks, spending time with loved ones and reflecting on where we're headed as collective community, I'm also excited to start looking ahead to what 2014 might bring.

It was previously noted that details like membership and usage pricing, station locations and seasonal availability, still need to be finalized but is there still time for the City to modify the bike share infrastructure allocation? If so, is it likely that Council, having cut bike lane funding by a third , will allot additional funds to cycling infrastructure, or is it possible that they would take the existing capital funds from Metrolinx and order fewer than 65 stations, but marginally larger ones -- or, alternately, ordering fewer than 650 bikes but more stations, thereby increasing in-rack parking capacity?

All the operational details of the project are out of the hands of Council now - they're resting with some very capable, confident and enthusiastic staff and with the management of Social Bicycles, who will be figuring out how the operating model will look. So to answer your questions, no, they won't be ordering fewer stations nor fewer bikes. The deal is signed and those conversations are happening without council involvement now.

I should clarify on some things - yes, council did cut the funding allocated to dedicated new cycling projects in 2014 to 200,000 from 300,000, but they did not cut the funding for cycling infrastructure retrofits in the public works budget, nor did they cut the funding going to the Cannon Street Cycle Track (which will be coming form the area capital reserves). There's still most of the bike lane budget from 2013 sitting in reserve because the major capital project for 2013 - the Hunter Street Lane - didn't get built this year. The reduction in the budget, while it's not something I'm for, is something I understand. There's very limited staff resources on the cycling file, and they wouldn't be able to spend that money even if it were made available to them. I've been using this as an opportunity to highlight the fact that we need more staffing resources on the active transportation file, and I suggest that other advocates do the same.

Have we had any firm sense of how much they're setting aside for the CSCT? The best I've been able to manage is guesswork: There's apparently 250.000 remaining in Ward 2's AR allotment, and if the per-ward AR base is around 1.500.000, 1.250.000 has been earmarked for something or other. (Transparency is not fully funded yet.)

I'm not entirely sure - I'll pass on info as I get it, but all indications I've been given are that things are going to move forward quickly in the New Year.

Hey, this is all very good.

But yo, is anyone thinking about a Car Share program? We need one of those too.

Love the images of proper bike corrals. I'll be stunned if we get those. Some out of the way single rings are what we usually get.

Jason, your jaded outlook on this hopeless city of ours is tired now. Can you please give it a rest? Thanks, the readers of RTH.

jaded? Feel free to publish a post here of bike parking in Hamilton, but be sure to not include the single post-rings. Only include bike corrals like ones pictured above. I look forward to having my eyes opened to all the great bike parking that exists and I've somehow missed.

We've been asking the bike committee and city hall for years for corrals such as those pictured. Maybe I missed the mass installation. My bad.

There is at least one rather nice bike corral in Hamilton. It is on John Street in front of Downtown Bike Hounds.

I certainly agree that secure bike parking is a necessary part of an effective transportation infrastructure. There is no point in going somewhere if we cannot securely park when we get there.

Still sounding jaded. Please, like asked before, give it a rest. Thanks, the readers of RTH.

Cobalt Connects manages the City of Burlington public art program and we delivered the bike rack program there. We would happily help manage a city-wide bike rack program in Hamilton. We also have data on the number of existing bike racks in 8 neighbouthoods we can share.