When roaming around Dundas recently, I decided to spontaneously pop into the former factory space and see what, if any, old stories those old walls could tell. I hit the jackpot.

By Margaret Lindsay Holton
Published May 01, 2014

Sometimes you stumble over something that's so fantastic, so inspiring, you wonder how on earth you could have missed it before. I had just such an epiphany when stumbled into the former premises of Valley City at 64 Hatt Street, in Dundas, Ontario. 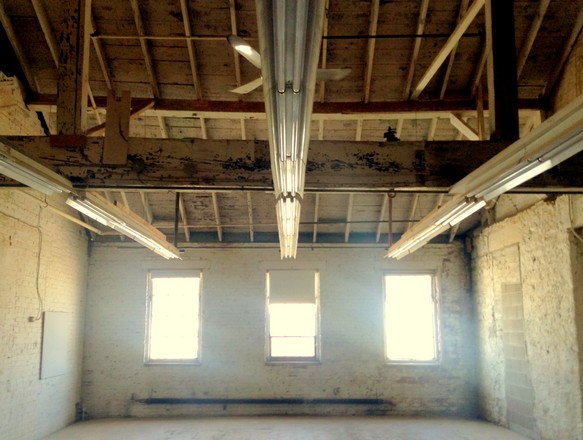 When I was younger and in the business of designing and fabricating Canadian fine furniture, we always knew that Valley City was 'over there'. We heard they did church pews and panels - (Ha! Snicker, snicker, pews and panels) - but prided ourselves on our 'superior' intricate custom wood furnishings.

Little did we know what they were really doing.

First, imagine my surprise (and, truth be told, dismay) to learn that Valley City Manufacturing had closed its woodworking doors for good in 2012. A rival champion had fallen. What a loss to the community!

When roaming around Dundas recently, I decided to spontaneously pop into the former factory space and see what, if any, old stories those old walls could tell. Woodworkers are a homey bunch. They often customize their surroundings to make their craft-making more enjoyable.

Lucky me, I hit the jackpot. Entering a seventies-ish styled empty office area, I was met by a 35-year veteran maintenance man who promptly put out the call to Robert D. Crockford, Chairman of Valley City, who was "somewhere on the premises".

Fifteen minutes later, Bob Crockford, a wiry and wry old-school gentleman, appeared and took me into his oak-lined but otherwise Spartan office. He proceeded to give me the fascinating history of what had transpired on that site over the past 178 years.

After one brief hour, it is no exaggeration to say that this site is a simmering cultural goldmine with a fascinating past, a burgeoning present, and, if all goes according to Bob, a really fantastic future. 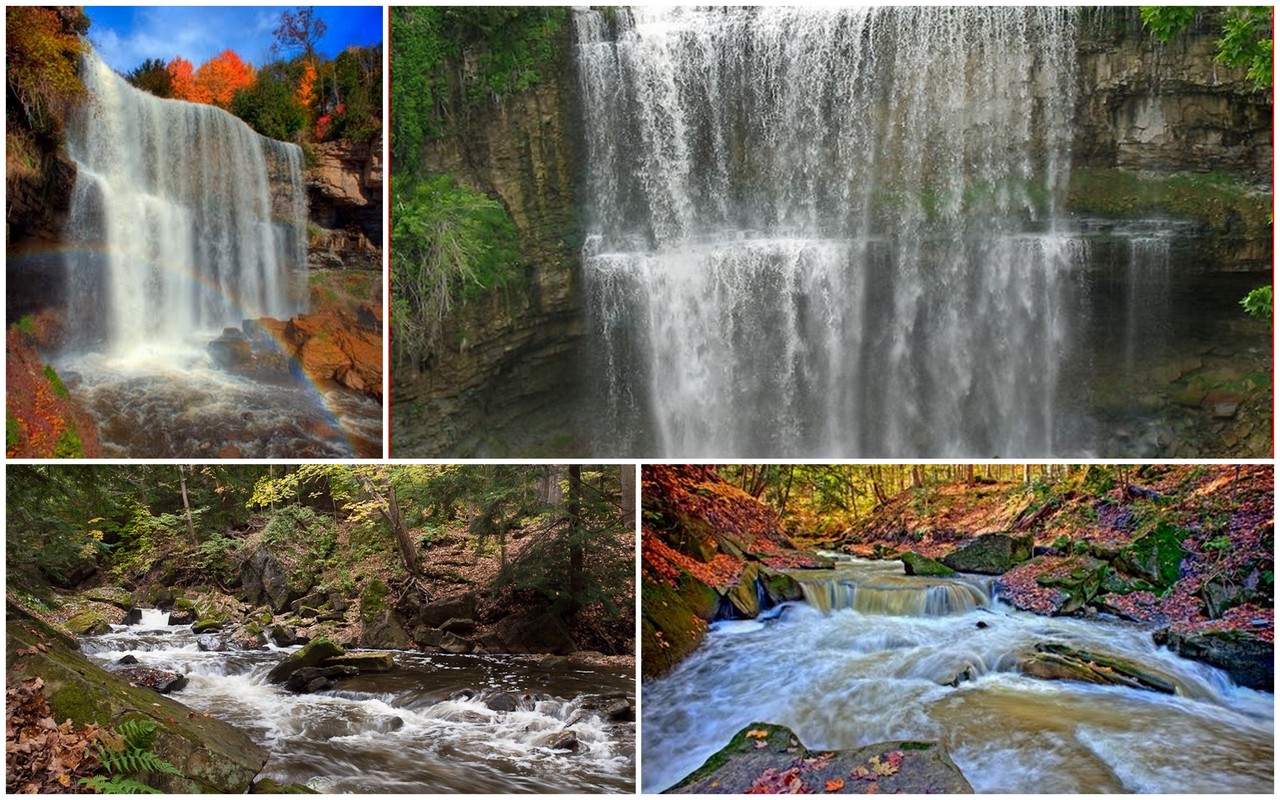 It All Began With a Creek

Every site has a story, and Bob excels in telling it. "A young Scottish engineer, John Gartshore, constructed the first building on this property in 1836. A recent immigrant, Gartshore, at the age of 26, founded the Gartshore Foundry in partnership with another Dundas-based businessman, John Bell Ewart."

"Gartshore's choice of partner was astute since Ewart owned the water rights for the Spencer Creek. They consequently controlled the only available source of power in the Valley - the rapidly running water of the creek cascading over Webster Falls."

But they had their problems. "One of the buildings located on the property was swept away during an early spring flood and on October 6, 1846, the entire building on Hatt Street was destroyed by fire." Luckily, both partners decided to rebuild. The original cornerstone was re-incorporated into the new premises. 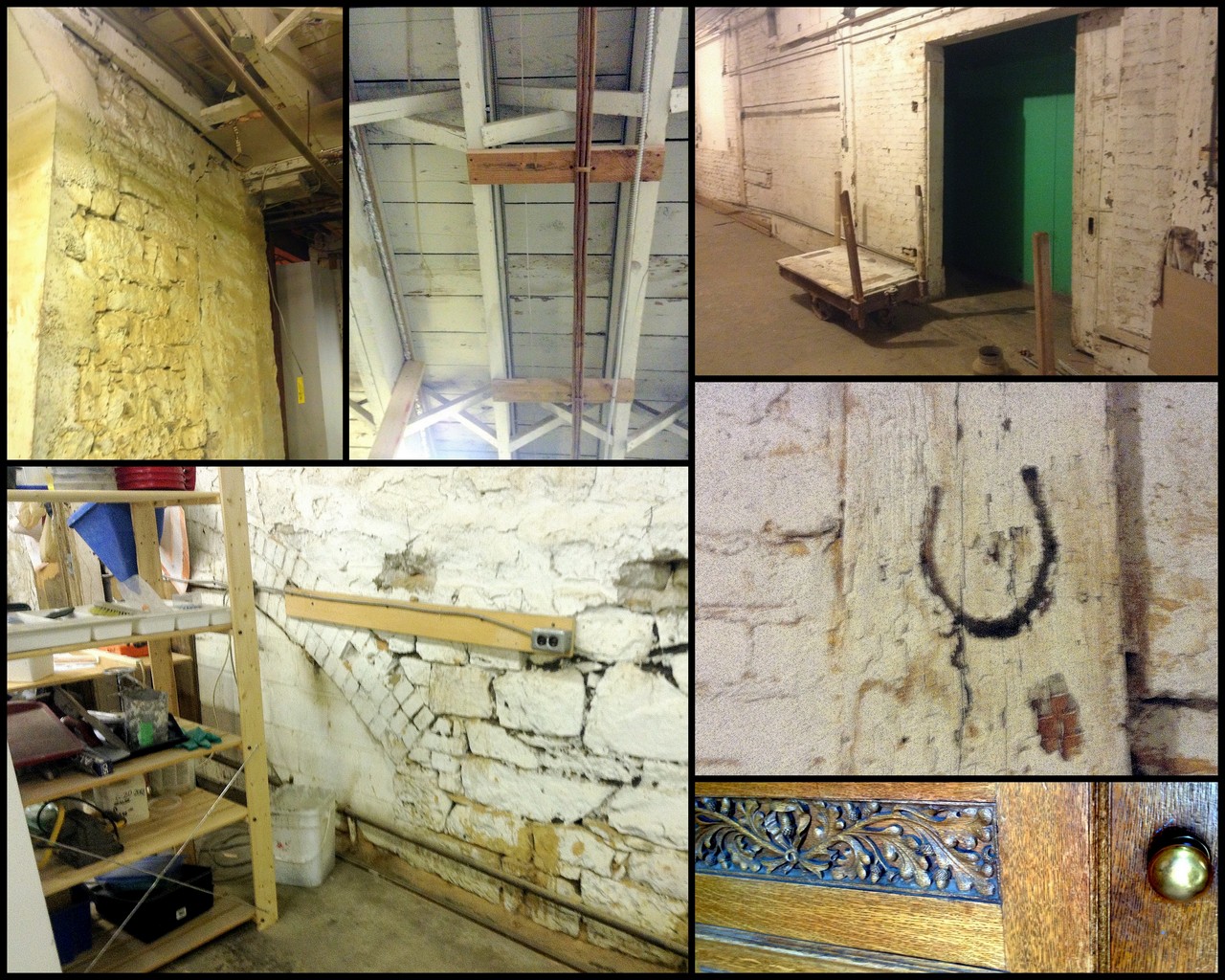 Tagline: (Clockwise) Century old stone walls and wooden ceilings, an elevator shaft, a woodworker's mark, sample of wood-carving in the office area, and traces of the original water-wheel race from the Gartshore foundry are still visible throughout the 'old section' of 64 Hatt Street.

Bob continues: "By 1850, Dundas was the foundry and machine tool capital of what was then known as Canada West. Gartshore operated one of the most famous and innovative establishments of the time, producing machines for grain mills, marine engines for the rapidly developing steamship industry and pumps for waterworks - an example of which is still installed at the Hamilton Waterworks."

(Sidebar: Among the many people who trained at the Gartshore Foundry were Robert McKechnie and John Bertram who both went on to build the John Bertram & Sons Company. John Inglis, the founder of the Inglis Washing Machine Company, learned his trade with Gartshore as did John McClary who, along with Gartshore's second son, established the McClary Washing Machine Company in London.)

"After Gartshore's departure in the mid 1860s, the Company was operated by a group of local businessmen (either as the Thomas Wilson Company or the Dundas Foundry, depending on which source you consult). By the late 1880s, the business had foundered. There were several attempts to revive it, lastly by the Cocheran Machine Company from whom the partners, John D. Pennington and Edgar Baker, purchased the building and premises in 1893. It was virtually vacant at the time."

A bit of backstory is relevant about these two Hamilton enterpeneurs. Bob continues: "By the early 1880s, Alexander Graham Bell had just invented a device which would come to be known as the telephone. Pennington and Baker recognized the potential in this new device, and in 1884, began to manufacture the wooden boxes into which Bell mounted the parts. That business was located at 81 James Street South, in central Hamilton. In the same year, the two partners launched their second product line, desks for students, for the rapidly growing school system. These desks incorporated special design features that quickly became the standard throughout most of Canada and the United States."

In its first decade, the business grew so quickly that larger premises was needed. Pennington and Baker moved their woodworking operations to Dundas in April of 1893. 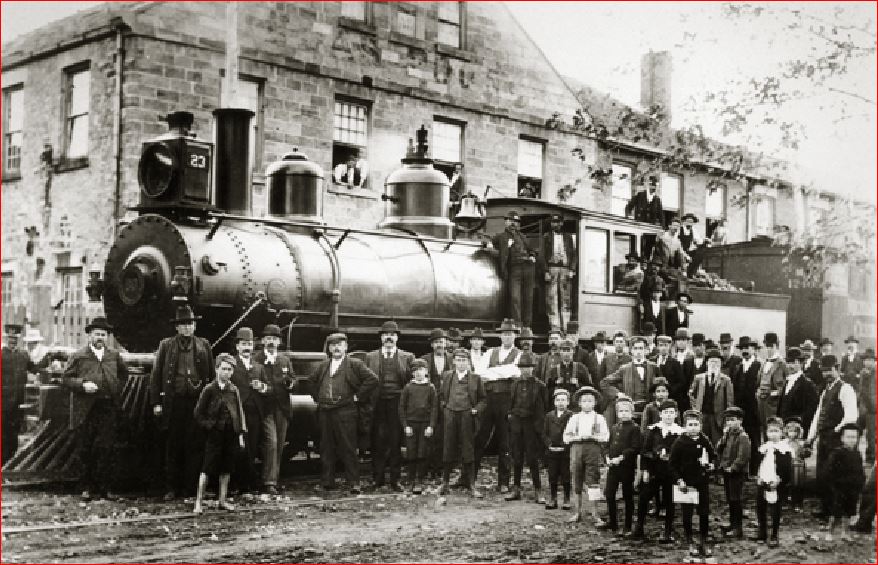 This site was connected to rail, exporting Made-in-Dundas goods all across the young country. (Photo image circa 1885, courtesy of Valley City.)

However, what little information is available about the business for the next ten years suggest dramatic changes in their operations. The school desks line disappeared and was replaced by church pews and other furnishings. "The significant changes in the Company's product line, barely a dozen years after its formation, likely arose from a disagreement between the partners over what products to profitably manufacture."

After 35 years in the business, John D. Pennington chose to retire in 1929. His retirement coincided with the beginning of the Great Depression. "The Company ceased to be known as Pennington and Baker and became the Valley City Seating Company. His partner, Pennington, subsequently turned the Company over to his two sons at the beginning of what became the worst ten years of economic depression in world history. By 1937, there was virtually no construction going on. The original Valley City Seating Company went bankrupt in 1937."

During this period, Joseph M. Pigott, who headed Hamilton's Pigott Construction Company, best known for Hamilton's first skyscraper, was determined that valuable suppliers to the industry should not disappear.

Alas, none of this was very successful. By 1941, Pigott assumed full control of the business. He then persuaded the very able Nelson Crockford, age 28 at that time, to take on the day to day management of Valley City.

When Nelson took the helm, in March 1941, Valley City had very few orders, 25 employees and little hope of surviving - except for the coming demands of the second world war.

"Otis Fensom Elevator Company of Hamilton began producing the Bofors Anti-aircraft Gun. They needed solid wooden cases made, with shaped sockets for each part and tool, so that each item could be located in the dark."

Valley City had equipment standing idle. A deal was struck, and soon Valley City became an essential supplier to the Canadian war effort.

Nine years later, in 1950, Pigott Construction sold Valley City outright to Nelson Crockford. With the war over, middle-aged Nelson knew new products had to be found. "The school, university and hospital furniture markets, fuelled by the post war 'baby boomers' provided the greatest growth opportunity. In a brief five years, from 1959 to 1964, Valley City doubled its factory size with additions of the east wing, the new office and the new shipping wing. By 1968, the total staff had grown to near 200 people."

But in the 1970s, the school and university markets on which Valley City had so successfully prospered for 20 years went into serious decline. The Company had to diversify to survive again. Innovative new laboratory products, such as the McMaster Sub Servo system, were developed.

In 1978, Nelson R. Crockford retired. He was succeeded by his son, General Manager, Robert D. Crockford - a.k.a Bob. Robert knew that the next real opportunity for the company lay south of the border. Health care projects in Boston and beyond provided his first foray, but in the early '80s, his emphasis shifted to high quality laboratory furnishings. 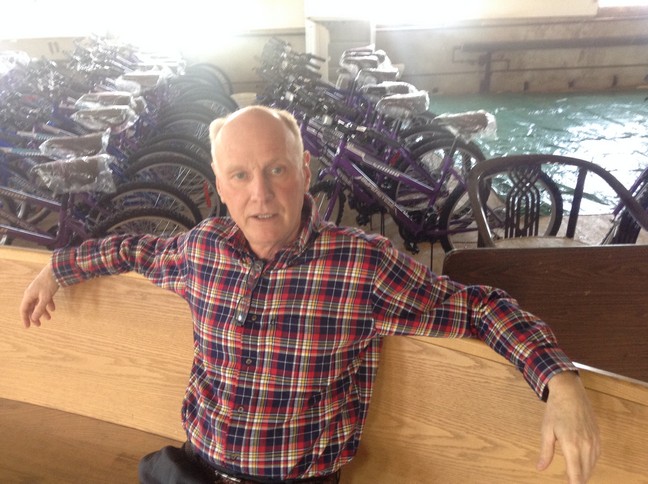 Raconteur, local historian and today's Chairman of Valley City (sitting on one of the last Valley City church pews on site)

Over the next twenty years, Valley City solidified its position atop the laboratory furniture industry with a "who's who" client list of medical research institutions, like Yale, Harvard, Cornell, the University of Pennsylvannia, and Southern California. "At its peak, laboratory furniture represented 80% of Valley City's business with specialty seating for churches, courthouses and theatres providing the balance. More than 90% of Valley City's production was sold south of the border."

As you now know, this was no ordinary panel and pews manufacturer. And perhaps, in part, because of this, Valley City formally closed its doors as a 'manufacturing business' in 2012. 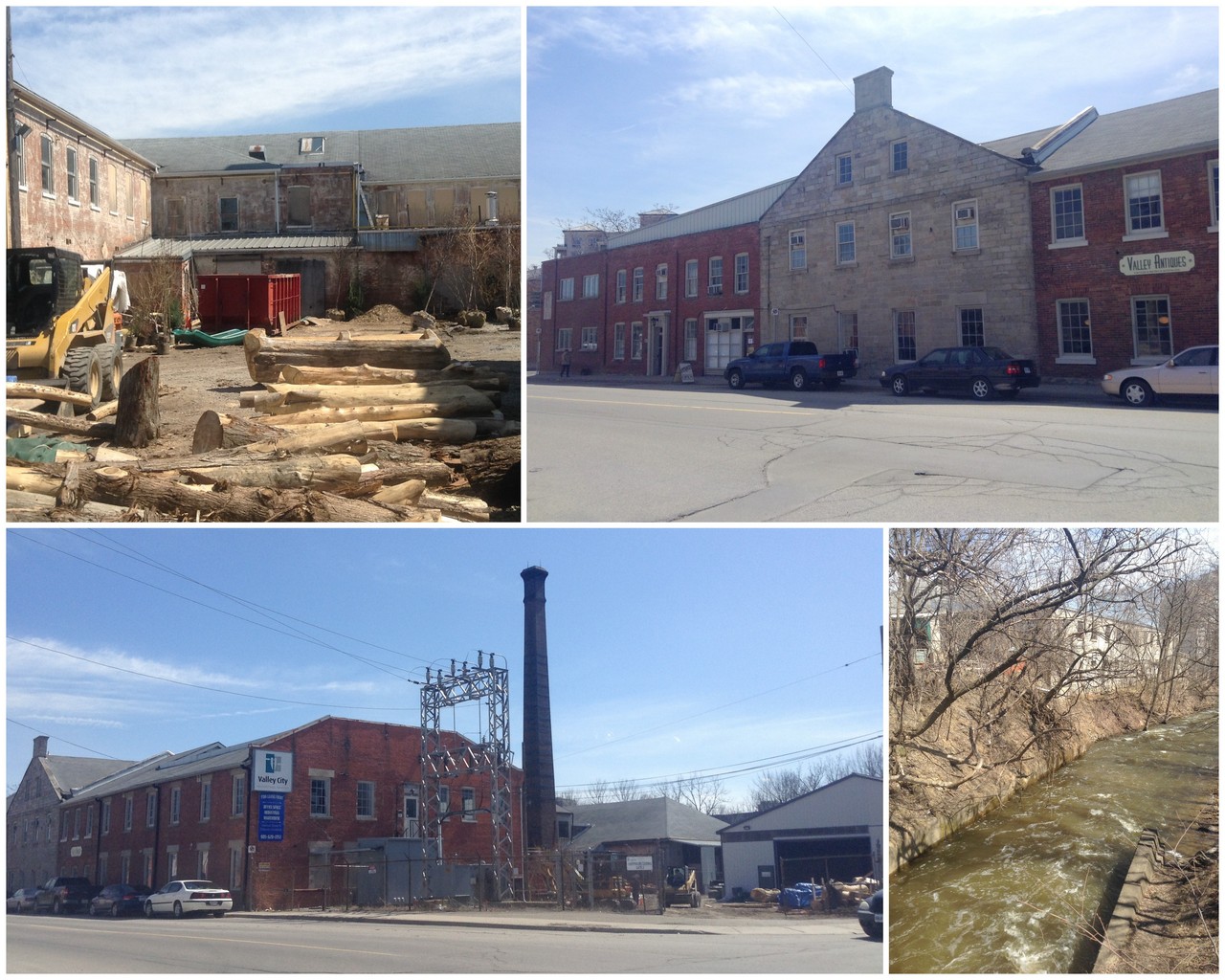 That Was Then, This is Now

Today, with a 2.7 acres of prime real estate in downtown Dundas adjacent to Spencer Creek, Bob Crockford and his financial partners are slowly converting this former industrial site into a burgeoning innovation hub / cultural centre / possible condo development on the creek.

Remember, this is only half the potential space. 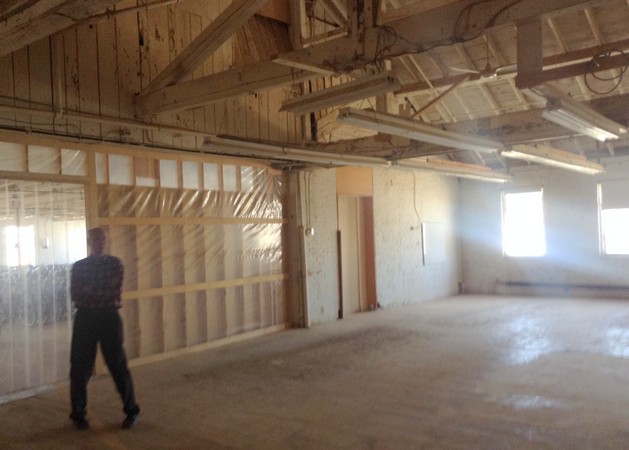 In my tour around the facilities, I got the distinct impression that Bob is no ordinary developer. He is interested in having tenants or owners of his building who are actively contributing to general well-being of the larger community. Thus, it is not surprising to learn that he has given over space to Mark Chamberlains' up-coming Bike For Mike charity ride. Dozens of volunteers have assembled over 400 bikes on these premises, courtesy of the Crockford clan.

To be sure, this grand ol' architectural dame ain't done yet. If ever there was a story of urban renewal and rejuvenation in the greater Golden Horseshoe area, this is it. There are many unsung opportunities at Valley City for any with a strong penchant for historical design, cultural roots, and inventive innovation.

It's a small stretch to see that Valley City could very easily become the Distillery District of Dundas. It just needs a tiny bit more grit, guts and a couple of gobs of development capital ...

Check it out. Valley City is Open for Business - again. 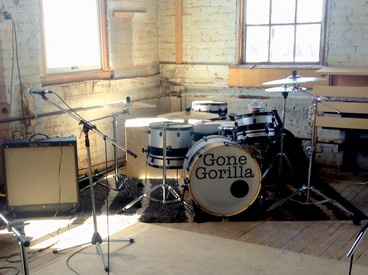 This article brought back to mind my own brief association with this business. In the mid fifties we purchased TV cabinets from them as their customer had gone bankrupt. They were made for Coronet TV and we were involved with their service arm. We were able to upgrade many customers TV sets with them.

Thanks for your comment. Yes, seems this site and business are FLUSH with local history ... There's always the story we know, and then the stories we don't. That space is just riddled with tales, past and present. A cultural goldmine.

A great post! Thanks for spending your time in researching and writing it.

Thanks. It seems every time I turn around someone's got another story to add ... Just got this ... "Valley City also did all the desks and woodwork for the Spec when they moved to Frid Street in 1976."

What fascinates me is how integral they were to the growth, development and success of many of the area businesses.

The site is grand!

kind of reminds me of the Arts Block in Brantford