The new Mayor of Paris, Anne Hidalgo, has just announced that the default speed limit for Paris streets will be reduced from 50 km/h to 30 km/h over the entire city of Paris. 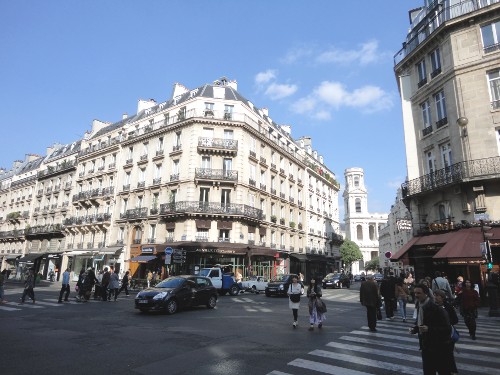 In addition, Paris will implement special mixed streets where pedestrians can walk and linger anywhere, and cars are limited to 20 km/h. Even the Peripherique, the highway ring road that runs around the city, has its speed limit reduced from 80 km/h to 70 km/h. Only a very small number of major afterials will remain at 50 km/h.

The change was tested in pilot projects and is now being implemented system-wide based on the results of those tests. Reducing dangerous vehicle speeds and air pollution benefits everyone, so it only makes sense that a policy demonstrated to achieve these goals should apply everywhere.

It was not studied and re-studied and studied again for years on end without ever making an impression on the status quo approach to street design. Perhaps more significant, the fact that some people might not like it does not mean the project is squelched.

Paris has already shown through its cycle lane and Velib projects that a major system-wide change to a city's transportation network is often much more successful than hesitant, incremental changes bogged down by never-ending studies.

This "flooding the market" approach to change transforms people's behaviour in a way that tepid, go-slow tinkering cannot. By establishing a single mental model across the city, it actually makes the change easier for motorists to accept and adopt.

Of course, Hamilton could never think of doing something similar, since we have so much traffic that needs to flow and so little space, unlike the quiet, spacious, provincial city of Paris!

But in all seriousness, it is interesting that back in its Ambitious City days, Hamilton did "flood the market" with overnight one-way conversions.

That turned out not to be such a good idea, but we seem to have drawn the wrong conclusion. Instead of, "Be prepared to evaluate big decisions and change if necessary", we have learned, "Avoid ever making ambitious changes".

These days, Hamilton almost never gets beyond the study stage, or we make "decisions" that are never implemented - like the 13 year old list of two-way conversions - or we debate endlessly about even undertaking a study for fear that we might eventually be forced by the evidence to make a decision.

Our Councillors constantly worry about the presence of an "exit ramp" from any controversial policy, with the result that we fail to commit to necessary changes.

For what it's worth, I actually like the idea of flexible pilot projects. For a long time, pilot projects were - I was told five years ago that the City can't do pilot projects - and have been recently embraced in such a way as to delay real change.

Well if Paris just west of Hamilton can do this then we can do this and fix dangerous one ways to two ways too.

Bad idea by Paris. How will anyone visit the Eiffel Tower now if they can't speed all the way there from Ancaster....I mean, the outlying suburbs. Watch tourism just disappear. Businesses will surely look to leave the city for greener pastures like Hamilton. We should develop a French language marketing campaign promoting the fact that we still have Main St -our number one competitive advantage- just waiting for their business to relocate.

Once word gets out that Hamilton has had the visionary and business-friendly leadership to retain such a highly sought after commodity like Main and King, we won't know where to put all the new businesses sure to flock here. After all, an 'advantage' means we are kicking other cities' butts right??? Right??......

I started learning french online but mayor Bratina said nothing good's online so I stopped :(

Never let it be said that cheap real estate can't be sweetened further.

Apparently our 'number one competitive advantage' requires a lot of public begging and subsidy to get anyone to build anything. I wonder how Paris gets all that development and business to locate there?? They must be spending billions in free money and tax breaks to convince businesses to set up there. Otherwise, who would want to be somewhere where pedestrians and cyclists can move around safely and cars have to drive 30k???

PARIS FRANCE! does anyone read the articles?

I think the writer knew that.

What's the ratio of pedestrians-vehicles in the Paris CBD? What about Hamilton? Could be a key reason for this...

Yes, you are right. A key reason why people in Hamilton are not as vocal about slowing down cars is because those people exist in fewer numbers. Its not as nice to walk when the ratio of pedestrians:vehicles is very low. If Hamilton had as many pedestrians as Paris does it would be much more obvious why slower speed limits is a good idea for Hamilton's streets.

Paris has extremely high densities of both pedestrians and automobiles. It has also had a longstanding incremental policy of encouraging walking (for example by pedestrianizing streets) and has implement "car free Sundays" in some neighbourhoods for over ten years.

I'm not sure what the statistics are for central Paris, but for greater Paris (Ile de France) http://www.lejdd.fr/JDD-Paris/A-Paris-la... says that there are 41 million trips made each day, of which 38% are by car and 20% by transit (the remainder would be walking or cycling). On average, each resident spends 33 minutes in their car and makes 1.5 car trips per day.

The primary objective of the speed limit reduction is to reduce pedestrian injuries and deaths, and secondarily to attempt to reduce air pollution.

It is interesting that Paris is making major changes to reduce pedestrian injuries and deaths, despite already having a very low rate compared to Hamilton (for example).

As I pointed out before http://raisethehammer.org/comment/70796 Paris, with a resident population of 2.2 million (much higher during the day) and sidewalks crammed with pedestrians had only 18 pedestrian deaths last year (no children). In comparison, Hamilton with a much smaller population and enormously fewer pedestrians had an average of about 6 pedestrian deaths per year between 1991 and 2010 http://www.hamilton.ca/NR/rdonlyres/E8EE...

why?? Pedestrians deserve to be treated as roadkill until they hit a magical % of the total population?? Sounds like a great plan to make sure the ratio never improves.

So, "if you build it, they will come"? I'm okay with that, but not in one giant sweep. Needs to happen over time...like it or not.

I agree that an organic transformation is a good way to do it.

To steer it toward happening, it still needs a firm vision from leadership that doesn't waver and change every few months.

If it was serious, I don't think a phased implementation would bother too many people. Adjust zoning rules (I'm looking at you, parking requirements). Build transit projects. Give commuters time to adjust. Gives business time to adjust, new business will open, new people will move to the area, it will happen organically over time anyway.

I agree that the addiction to current sprawl based layouts and travel is such that an abrupt cold turkey would cause painful withdrawal.

I see merits and drawbacks to both cold-turkey and phased approaches. The key in both styles is to have a vision and stick with it. Then it can come to fruition before the heat death of the universe.

I think Hamilton could make this happen much more easily than people think.

Change the lights on Main and King so they're timed for people to drive 35 instead of 55.

I mean, if they're never going to get around to converting them to 2-way, might as well do something to help.

This is why I think children should make more decisions in our lives.

An adult will ignore the obvious issues, but kids? Kids would say "that seems bad let's not do that" and then eat some ice cream.

It appears Hamilton must go it alone in leading the charge.

they don't call us the Ambitious City for nuthin

Sorry to steal Hamilton's thunder and burst your bubble, but Paris is not only a 20 minute city, it's actually a 15 minute city. That's right! Hop on their commuter rail called RER and ...

Using the RER, faster than the metro because stops are less frequent, you can cross Paris in 15 minutes.

But don't worry! Any moment a highly misunderstood troll will show up with excellent documentation of how that is not working, complete with photos of economic destitution because they invested in rail, and their city burning to the ground because fire trucks can't get anywhere. Once we see that documentation, we can rest assured that we're still number 1!

Touché! I should have looked up 15 (or quinze) before writing.

In more than one way Paris is the City of Light, something I continue to hope that more Hamilton politicians begin to see.

The RER is a rail line. It's great. It doesn't run on roads. Cars and fire trucks go under and over it. It's a rail line and doesn't travel down major vehicular arteries. London has numerous rail lines that serve the same purpose. They connect the suburbs to the inner cities. Hamilton could have something like that if we ran rail lines in from Burlington, Waterdown, Ancaster, the Mountain and Stoney Creek. Clear some right of ways and lay down the track!

This seems like a more efficient way to convert rather than neighbourhood-by-neighbourhood as is going to happen in Hamilton. Who would argue with a reduced speed limit in their own neighbourhood?