Upper James is a nightmare today, but it would make a wonderful European-style boulevard.

With James North well on the road to recovery and James South emerging from critical condition, my thoughts naturally drift up the escarpment to its discontinuous namesake.

Upper James is a mess. Despite the best intentions of its designers, the street is strangled by congestion. All those lanes notwithstanding, it can scarcely bear the burden of cars struggling to and from Caledonia and jostling with cars trying to reach the stores arrayed along its sides.

Upper James contains sidewalks, but they've got plenty going against them: they're too narrow to carry many pedestrians and flanked by seething traffic and gaping parking lots. The street is similarly hostile to cyclists. If you want to get to a destination on Upper James, you pretty much have to drive.

So how do we change that without destroying the lively but currently auto-dependent trade? I think it's time for Hamilton to think about creating a European style boulevard.

A boulevard on Upper James: the red lines indicate the borders of the boulevard, which would replace parking lots with pedestrian space and stream cars into high-speed through traffic in the centre and low-speed local traffic on the outside. (Image Credit: Google Maps)

For those unfamiliar with the form, a boulevard allows high-speed traffic and pedestrians - street life - to commingle.

Beyond the outer median are narrow lanes for local traffic and curbside parking, then a wide pedestrian area containing benches for people-watching, restaurant and cafe patios, and places to congregate.

This pedestrian area, in turn, abuts the storefronts, relegating parking to the curbside, behind the buildings, and side streets.

The tree-lined medians provide a physical and psychological buffer between the through traffic and the pedestrians.

Trees are both beautiful and functional; they shield pedestrians from high speed traffic, clean the air, provide shade and cool in the summer, look and smell appealing, and frame the pedestrian area as a smaller, more intimate space than the full 70-100 metre width of the boulevard. Without them, we revert to the hostile sidewalks that flank Upper James today.

It just so happens that the width of Upper James from storefront to storefront (I'm thinking of the section north of the Lincoln Alexander Parkway) is ideal for a boulevard.

We've lost faith in the ability of our urban planners to make things better. However, much of what we, in the nascent years of the twenty-first century, consider classic had its origins only 150 years ago.

Georges-Eugène Haussmann, the planner who almost single-handedly modernized Paris in the mid-nineteenth century, popularized boulevards by demonstrating how they enriched the fabric of urban life.

James Howard Kunstler writes, "even under the burdens of today's car traffic, the boulevards [of Paris] contain some of the most desirable real estate in the world. People want to live there. This is testimony to the excellence of their design." (James Howard Kunstler, The City in Mind, The Free Press, 2001, p. 26)

The boulevard creates an environment that welcomes people without impeding the flow of traffic along a major corridor. Today, Upper James serves the latter (somewhat) while denying the former.

In place of an environment appealing to pedestrians, the street offers abundant free parking - an ugly consolation prize for harried motorists. The parking lots sit half empty most of the year, wasting valuable space.

Traffic engineers don't like boulevards because they violate the modern planning notion that everything must be kept separate, like assorted vegetables in a baby's partitioned dish.

capable of serving a district's full ranges of mobility: walks for pedestrians; lanes for public transit vehicles, and separate channels for automotive vehicles passing through and those heading for local destinations. Versatile boulevards are little known in North America, and those that do exist are seldom more than ghosts of what they could be. But elsewhere in the world, especially in places with Mediterranean cultures, boulevards are places to which people flock for a stroll when their day's work is done, to see the neighbours, get word of strangers, pick up other news, and enjoy a coffee or a beer and chat while they take in the passing scene, including sidewalk play of children. (Jane Jacobs, Dark Age Ahead, Vintage Canada, 2005, pp. 149-150)

A boulevard design on Upper James could simultaneously meet a number of complementary needs, providing:

This would also encourage infill development to close some of the gaps that are an inevitable by-product of strip commercial development.

Some of those buildings could also accommodate residential developments upstairs, increasing the density and bringing more people onto the street.

Of course, the boulevard will falter once it reaches the Lincoln Alexander Parkway. The gargantuan cloverleaf interchange obliterates the possibility of human-scaled development at street level. 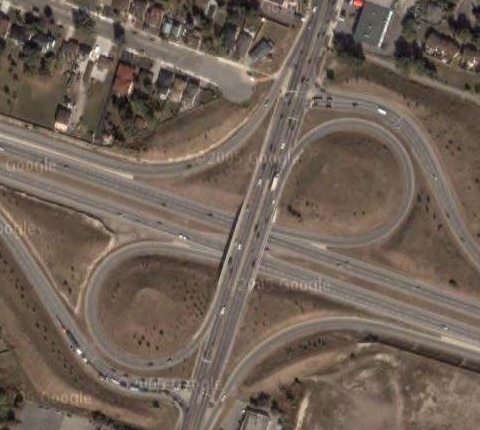 South of the Linc past Stone Church Rd., the built environment loses coherence entirely, decaying into a mishmash of vast parking lots with big box stores set deep within them.

It will take more imagination than I can muster to transform the area around Upper James and Rymal into a people-friendly space.

Kunstler writes, "The leading painters of the late nineteenth century turned frequently to the [Parisian] boulevards as subject matter. ... Who is painting, or even photographing, the strip malls of today?" (The City in Mind, p. 27) 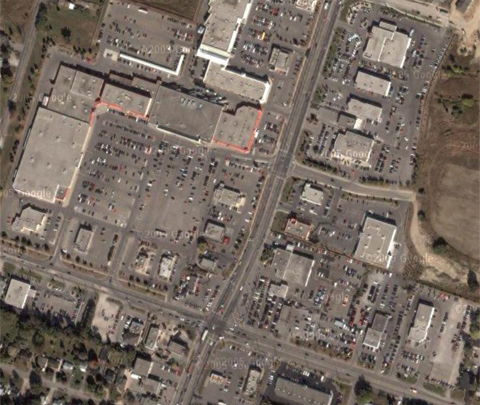 Revenge of the big box: the corner of Upper James and Rymal represents commercial planning at its worst. (Image Credit: Google Maps)

By adrian (registered) | Posted None at

This is an outstanding idea. I recently visited Paris and you're absolutely correct, the boulevards are great. I don't recommend adopting the monstrous traffic circles, but the boulevards are definitely a great idea. This article leaves me wondering if North American urban planners have ever travelled outside of North America. I suspect that they have a smug superiority born of their ability to plan cities using straight lines, and this has blinded them to all the things they could learn in Europe. I mean, we're not talking rocket science here, we're talking about building a friggin road!

This is a wonderful idea. Have you pitched it to the BIA up there?