In some ways, the future is already here, but Hamilton needs to get a lot better at distributing it more evenly across our various neighbourhoods and communities.

After an awesome orbit with Col. Chris Hadfield at Hamilton Place on Friday night, I attended the all-day Our Future Hamilton workshop session with my almost-14-year-old-daughter to try and ensure that she has a say in what Hamilton will look like when she's 39 years old. 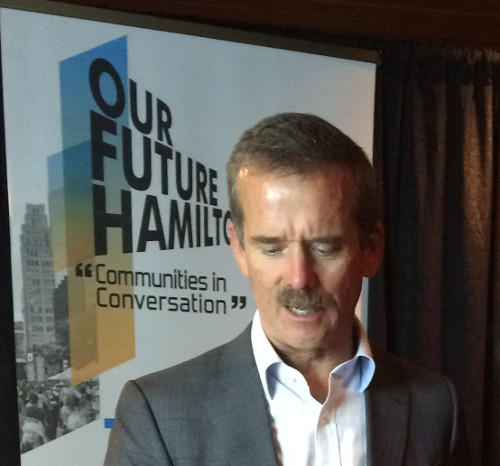 She's opinionated and puts up with her Dad's lack of selfie skills.

It's early here at #HamOnt Convention Centre for #futurehamont with @amz__123 (find us 3 tables from the podium) pic.twitter.com/j7gN1Kwm2M

But 2040 is a long time away - especially for a teenager living in the moment. And unfortunately for her, in many ways she lives in the future already.

Her world includes so many elements of the future discussed by the three speakers during the morning session that she's truly unaware of the differences between the average reality and her reality. In part because I'm a technologist by trade and a bit of a geek, our home is a toe-hold on that future.

She's accustomed to a world that includes:

During the morning sessions, she heard about a lot of those things as being future possibilities for a city like Hamilton.

She's wondering why the rest of Hamilton can't have the future now - just like her.

During the second round of speakers, the President of Mohawk College, Ron McKerlie, brought the stories of Charlie and Josh, children from Code Red neighbourhoods, and these stories resonated with her. When we moved to Hamilton, we moved to Ward 3, north of Barton, and she counts kids like these among her friends.

She spent the summer as a counsellor at the Rotary Club Summer Literacy Camp held annually at Cathy Wever Elementary school - she does her part to help these kids dream of the future.

She wants them to have her future. And she thinks that it should be something we all strive for.

I didn't have the heart to tell her that Hamilton has a tag line - "The Best Place to Raise a Child". She'd be crushed to hear that what we've got now is the best we've been able to do since she was in Jr. Kindergarten at Gibson School.

I attended the Chris Hadfield event, it looked like something like 2000 citizens attended.
It was very inspiring!

from the guy who will turn an article about houseplants into a screed about the world-changing benefits of separated bicycle lanes.

Interesting viewpoint. I don't see a single repeat of anything I've ever said on RTH in the article.

The only "anti-teacher" part is the reference to my daughter's opinion - which she is as permitted as you are yours. And although she was in Grade Six when she was interviewed for that article, I'm fairly certain that her view could be described as anything but childish.

Oh, and pro-tip... fact check before you make snap decisions... My wife - and Amelia's mother - is a teacher. The actual OCT certified kind.

For what it's worth, if you were to describe my bias, it's an anti-teacher's union bias. And I'm sufficiently informed on the topic to hold my opinion as valid enough for conversation here.

But thanks for commenting!

Awesome article ! Congrats to your daughter she sounds great!

as for kevin .... I think all the polling companies are busy right now so the teachers union can't afford to poll public sentiment. My message google 'reagan air traffic controllers' The teachers pension fund ( > 3% TSE) has a very anti union stance ( and is a gambling provider in UK, former share holder in Imperial tobacco) Fix your own house then talk about union and human rights. Many people have lost ALL RESPECT for your union. You can only fix it from inside ( i cannot help) it takes 1 brave man.

you only have read feeds like this https://twitter.com/mjursic To understand how poisoned this has become...

RTH -- is this reply addressed a comment that has now since been deleted (e.g. offensiveness)?

Is this in response to a comment that was previously deleted? I'm confused.

I think that Kevin may be upset at some of my previous comments on teacher's unions and my daughter's opinion piece posted on CBC Hamilton in 2012.

Oh! Context I didn't know. Not commenting on history I'm unware of...

Back on topic... Either way, I think all parties have to agree Chris Hadfield was great event and very inspiring. Funded by sponsors, citizens were able to get free tickets.

Chris may not be a city planner, but he definitely inspires citizens. He also showed satellite photographs he took of Hamilton too. And also, the parallels he pointed out, such as preparing for a space mission has a lot of parallels with preparing for a city project, etc. And the determination that allows someone to succeed. And about dreaming (dreaming about Space versus dreaming about Hamilton).

And Kids being inspired to a career with the city (kids were at the Hadfield event too!). And of course, we got to watch a bunch of favourite clips like the David Bowie event where 700,000 Canadian schoolkids sung along via videoteleconference with Chris up in space -- a major social media undertaking that captivated a lot of schoolkids. And to end it off, he sung live on a real guitar at the final 5 minutes to close it out. It certainly was a great thing to see happen.

Also, those who know me, know I'm now becoming a local transit activist, with my UrbanToronto Hamilton Thread, beginning the RaiseTheHammer Hamilton GO Train Article series, the Citizen LRT advocacy which is now tweeting and facebooking (with website hamiltonLRT.ca coming soon). For those who ask -- yes, I've been corresponding with the hamiltonlightrail team who are totally for it, as we complement each other. And a fan of related things like our new SoBi Hamilton Bike Share that out-bikeshared Toronto.

Its VISION is 'TO BE the best place in Canada to raise a child, promote innovation, engage citizens, and to provide diverse economic opportunities.' (Emphasis mine.)

This may seem like nitpicking, but it's not. It's like saying 'The Best Player in MLB', when what the athlete said was 'My goal is to be the best player in MLB.'

Understood, perhaps a mixture of terminology.

I stand by the point that in the time that my daughter has been a Hamiltonian (JK-9), we haven't managed as a city to move the bar much.