Metrolinx and GO Transit are looking for feedback, and Hamiltonians need to make sure our voices are heard.

Currently, the GO Transit website is calling upon people to fill www.gorailsurvey.com the 2015 GO Train Survey.

In addition, a Metrolinx staffer canvassed me at Hamilton GO Station asking me to fill a different survey, at transitsurvey.ca/gotransit. 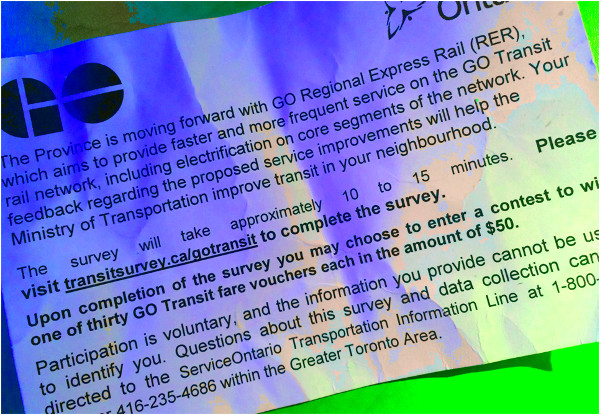 Hamilton May be Underrepresented

There is a very high probability that Hamilton is severely underrepresented in these surveys. Many McMaster students often catch the GO Bus to Aldershot, bypassing Hamilton Downtown GO or West Harbour GO. Other Hamiltonians drive to Aldershot GO station at the far South Parking Lot.

In these situations, it is very easy to miss the Metrolinx survey canvassers. 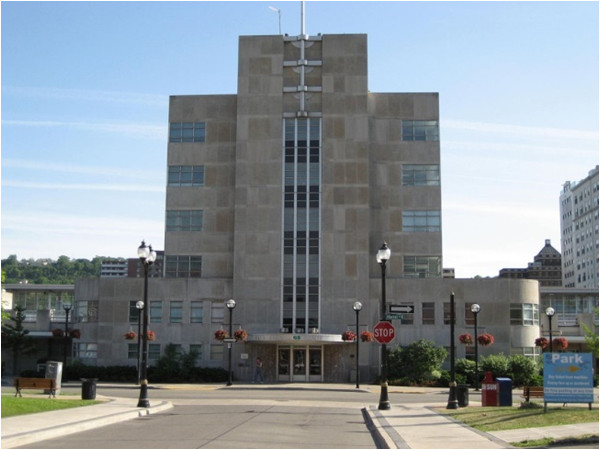 Metrolinx Needs to Hear from Hamiltonians

As Metrolinx is spending $1.2 billion on Hamilton for a combined LRT system and GO train expansion in the next several years, there are potential low-hanging fruits whose priority could be potentially be adjusted.

There are two separate surveys available for filling out.

Thanks Mark. I had done the one online but didn't know about the second paper based one. I'll look for a canvasser next time I'm through the station.

So in their “What does fare integration mean to you” question, my reply was this:

“To me, fare integration means that people who live downtown pay unfairly high fares in order to subsidize urban sprawl.”

Or, how do I answer the question:

"Do you personally own, lease, or have access to a vehicle?"

Since I own a bicycle, the answer is "yes," because bicycles are vehicles. But why do I suspect that whoever wrote this question is ignorant of this.

I read "vehicle" referring to "motor vehicle". For now, this is the presumed meaning, based on the phrasing of the sentence.

Yeah, was "motor vehicle" one word too many?

Filled out the survey, even though I only use GO to travel on when I am visiting the Greater Golden Horseshoe for my business, due to the fact I live in Ottawa.

I Would kill for a GO Eastern Ontario though! Area politicians are all for it actually except unfortunately, the ones you need the most, the city council of Ottawa. Mention the possibility for an area wide commuter rail and bus network for Ottawa/Eastern Ontario and they get a horrified look on their face and then ask you to leave the building, I am not kidding!

The look gets even worse when you ask about interprovincial rapid transit to Gatineau, which is also in desperate need for improvement. Every morning 90-100 STO buses per hour flood across the bridges onto Wellington and Rideau Streets and mix with the 30-40 OC Transpo buses per hour and then repeat this in the other direction in the afternoon peak period. By the way, this is not part of the 185-200 buses per hour per direction on Albert and Slater Streets, which are part of the Transitway System. Wellington Street, the street Parliament Hill is on, and Rideau street form a simple east-west arterial road route in the core of Ottawa's downtown. Rideau Street has 2 rush our only bus lanes, there are none on Wellington St. The intersection of Wellington/Rideau Street and Sussex Drive/Colonel By Drive is a mess during the peak periods.

One local female politician even told me that, they/we have too much activity going on with the phase 1 LRT system under construction and the planning for phase 2 to also force our planners (which I am, although not presently working for the city of Ottawa) to bother with this. She scolded me by saying, how much work that would be for our transit people and planners considering we are still trying to locally plan,build and pay for two Transitway BRT projects as well.

I told her that when GO Transit was being created in the mid to late 1960's, 1966-67 to be exact. The City of Toronto and the TTC had to aid the province and CN Rail in the planning for the original GO Train system, the Lakeshore East & West Lines. This was when the TTC had just opened the Bloor-Danforth Subway Line and had 2 extensions to that line already underway for completion in 1968. The Yonge Line had an extension under construction and the planning was starting for the Spadina Subway Line. "So what is your excuse", I asked? Following with, "their planners and managers had even more on their plate at that time and very little computing power to help!" She then looked at me with an incredulous look and walked away.

Thanks for the backstory for why GO doesn't exist in Ottawa (my hometown).

Bad survey comments aside, I wrote thoughtful responses in the "Fill Your Comments" type boxes. Considering the poor Metrolinx intern who will read & tabulate the common comments in a survey that they didn't design.

An employee who is probably reading them in an ugly user interface -- with the text secretly trunctated by a mean, evil database field size limit one-hundredth the size of the web textbox length limit (ha!). As much as some of us might like to write a long letter of dissapointment crammed into a 3-line comments box, I put the most important sentence at the BEGINNING of the notes -- to the lines of "More direct trains for Hamilton, please.". Just in case.