It turns out we all want to live in safe, healthy, walkable neighbourhoods that meet our physical and social needs.

The City has undertaken to develop Neighbourhood Action Plans for several neighbourhoods around the city that were identified in the Code Red poverty report as having significant challenges.

The only neighbourhood on the mountain to have a Neighbourhood Action Plan is Rolston Neighbourhood in the West Mountain, in the area framed by Garth, Mohawk, West 5th and the Linc. Rolston has a high percentage of low-income families and recent immigrants. 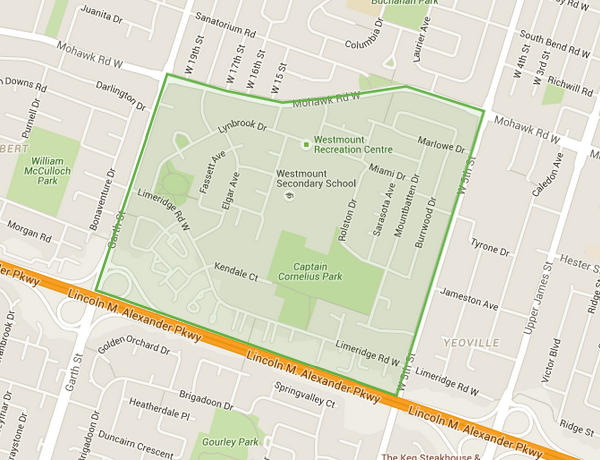 After 14 months of development involving lots of meetings and community engagements, the Rolston Planning Team has developed a comprehensive, 72-page Neighbourhood Action Plan, which will be presented at today's Emergency and Community Services Committee meeting. We can't link directly to the presentation because the City's committee meeting website is unusable-by-design, but you will find it under item 7.1 on the agenda.

In every single Neighbourhood Action Plan so far, one of the key themes has been safe streets, walkability, cycling, transit usage, parks, community gardens and other public spaces. We were curious as to whether the same pattern would hold on this mountain neighbourhood, where we are often told that people care more about ease of driving than safe streets.

Here are some of the items on the report's list of actions:

Work to protect existing forest and green spaces within the neighbourhood. Installation of a path and enhancement of natural features and spaces through the forest in Captain Cornelius Park will be explored to provide additional opportunities for physical fitness and awareness of nature.

Increase community gardens throughout the neighbourhood to build community healthy relationships with food.

Support the activities of the Adopt-a-Park groups at Newlands Park and Captain Cornelius Park, including: annual clean ups, on-going litter and graffiti clean-up, monitoring playground equipment for damage and in need of repair.

Here are some more excerpts from the Plan:

The Rolston neighbourhood was designed at a time when the motor vehicle was given priority. It is not surprising that the planning committee has made increasing neighbourhood walkability a goal. Residents are especially keen to improve connections between city housing complexes and the rest of the neighbourhood. To support this, they have identified multiple actions related to improving pedestrian safety and walking infrastructure. In a recent Photovoice project of local middle school students, one youth even requested a trampoline to cross a busy street on the way to school. Thus, making Rolston more pedestrian friendly is certainly in keeping with its vision for an inclusive, safe neighbourhood.

In our area there can be struggles with traffic flow, and we would benefit from some speed bumps to help slow down traffic, especially with all the kids getting to and from school.

Streets designed with pedestrian safety as a priority will decrease rates of traffic accidents. Maintaining sidewalks and paths will also prevent slips and falls, especially for seniors. Studies have shown that safety is a key factor in determining if one chooses to cycle or walk.

The mixed land use, density, and connectivity of a walkable neighbourhood ensure that residents have easy access to services required to maintain good health.

By encouraging people to get out of their cars and walk will reduce greenhouse gas emissions, hospital admissions related to poor air quality, and negative effects of climate change.

Rolston residents are also keen on protecting their public green spaces. This goal aligns well with promoting safety. Ensuring paths, playground equipment, and facilities are well maintained creates a safe park environment. A well-maintained park will be more likely used and valued. The Photovoice project showed examples of illegal dumping and litter. Children identified how unpleasant this made their walks to school. Litter also degrades public spaces, which residents value for recreational use and social gathering.

This is something we have been trying to stress at RTH for quite some time: generally speaking, we all want the same things. We all want to live in safe, healthy, walkable neighbourhoods that meet our physical and social needs.

This is not some downtown vs. suburban conflict - residents right in the middle of Councillor Terry Whitehead's ward want the same things as the lower city residents whose neighbourhood improvements he keeps trying to block!

We hope Councillor Whitehead carefully reads the Rolston Neighbourhood Action Plan and thinks about it the next time he has a chance to support a similar initiative in another part of the city.

Just a heads up that the beginnings of another Mountain community, the Butler Community, is trying to form a NAS region, and has their meeting on March 9th, 2016. See https://www.facebook.com/ButlerCommunityHub and https://twitter.com/ButlerHub1. Currently, I'm not yet aware if they are an officially registered Neighborhood Action Strategy hub (yet).

How dare you foment divisiveness by reporting on the common values between mountain and downtown residents! Don't you know Terry talked to some people at Westcliffe Mall who think mountain streets need to be wider.

This is fantastic news. The more Mtn neighbourhoods that start to organize, the better. As we've seen in Rolston, the themes are the same city-wide. People are tired of their neighbourhoods being treated as car sewers to somewhere else.
More Mtn neighbourhood associations will help hugely in the next election as they begin to spread the word to local voters that the same old crew at city hall are the ones who ensure their neighbourhood remain dangerous traffic sewers. Considering the abysmally low voter turnout in many of these wards, a few well-voiced community groups could finally drag some of these wards out of the 70's politically.

Nice!
You can absolutely form a neighbourhood planning team in Butler that works in partnership with City departments. However, neighbourhoods can't do anything like "apply" for or "register" for acceptance into the NAS. The NAS was formed in order to specifically work in 11 already-identified neighbourhoods. Many City neighbourhood groups exist independently of NAS though (like Durand), so there's nothing stopping Butler from doing something similar!

Thanks for posting this.

I'd like to clarify, we've adopted Yeoville into the Rolston plan since it's a natural boundary of major roads - Mohawk, Upper James, Garth, and the Linc. That's covered in the plan :)