With a Shakespearian subversion, Esther Huh has turned Othello on his old head.

It's been four centuries, but it's like he never died. Omniscient Shakespeare continues to inspire and fascinate, all over the world. Hamlet, for example, is the most performed play, ever. Shakespeare has more Google pages than God. Without theatrical hyperbole, it's Shakespeare's world, we just live in it. 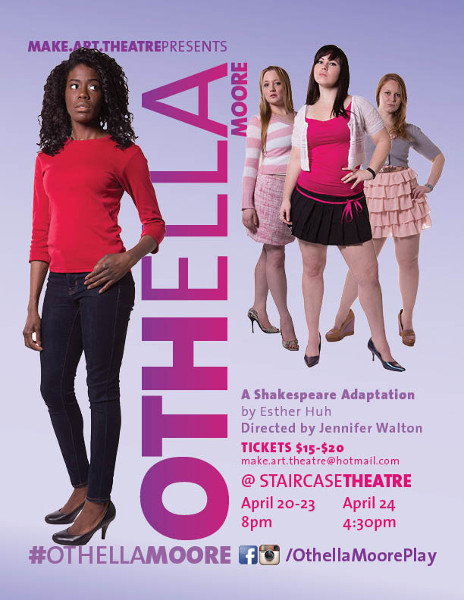 This is from Othella's press release:

Her version, with the genders reversed, is set in a high school, and what better location for a story of jealousy, rivalry, and revenge? Huh's retelling follows cheerleader captain Othella Moore, beloved and revered throughout her school, save only by Amy (this production's Iago), who sets in motion a scheme to bitterly destroy her rival, Othella, tearing Othella's life apart piece by piece.

This brand-new production will apply the Bard's themes to a high school setting, making the whole show fresh, original, and completely applicable to a modern audience - especially with Othella's use of multimedia in its storytelling.

In Shakespeare's time, there were few female roles and they were played by men. Virtually everything that hit the stage was written by a man. Interestingly, the modern world of theatre, many of whose inhabitants assume an air of enlightenment and progression, which escapes the rest of us, hasn't kept up with the times.

The studies and statistics [PDF] are plain: women make up most of the paying audiences, but are poorly represented in theatre's best (paying) parts: acting, directing, and writing.

The greatest disparity in gender equity happens in the playwright category.

This study shows that the rough 70/30 division of men and women in the artistic triumvirate-artistic director, director, and playwright-has generally remained unchanged for the past 30 years. Given the persistent and deep-seated inequities embedded in the Canadian theatre industry, informed, coordinated, and varied responses are required if change is to occur.

It's discriminatory and bad for business. With all of modernity's options, can theatre survive if it remains so misogynistic, antiquated, and out of touch? Probably not.

I had the pleasure of sharing a booth, breakfast, and beer (just me) with Esther, Laura, and Jennifer recently at Ray's Boathouse, where we talked about Shakespeare, Othella, theatre, which they all love, and everything, else.

As if scripted, while we were wrapping up, an old friend, Busker Al, came in to sing and play with his great trio, Sloppy Jalopy. He started with my favourite song, Fred Eaglesmith's "Time To get A Gun." What a day.

Frustrated by lack of opportunities in theatre, women are creating their own. Huh said of Allison Edwards-Crewe, who plays Othella, "She is an amazing, black, talented, fierce performer, but there are not a lot of options for a minority. I wrote this for her."

Language has always been changing, but the rapidity with which Shakespearian dialogue is becoming alien to young people has been exacerbated and accelerated by technology.

Shakespeare's facing other challenges and changes, which are occurring at an inhuman rate. As brains are being rewired and attention spans blunted by gadgets and screen absorption, the Bard is losing his magic.

By speaking their language, the cast and crew of Othella are making Shakespeare relevant and accessible to a new generation, who might not be interested otherwise. After an intoxicating introduction, an appreciation for Shakespeare, in his mother tongue, is the ideal outcome; keeping the work alive.

The rapidity with which (mis)information can be disseminated, globally, was unimaginable 400 years ago, even to Shakespeare, I'm sure. (I haven't been dead nearly as long as Bill and I can't believe it.) The gossip and treachery of Othello is alive and well in Othella, except the young women use new-fangled, rectangular texting tackle to spread gossip and shred adversaries.

Anonymous, online malevolence is pure evil, and it's everywhere. I have two teenage daughters, but no phone, so I'm fascinated and terrified by the strange, brutal world they inhabit.

In baseball, it is said of a pitcher who has a repertoire of pitches that the worst pitch to pitch is the one not committed to. The same applies to theatre. Writer, actor, and director of Othella agreed - the people working on the project have an extraordinary passion for it. They've been rehearsing for several hours at a time, several days a week, for several months.

When asked about her inspiration for the piece, Huh talked about her love of Shakespeare, writing, and creating interesting, diversified roles. She, also, described how she'd been in the cast of Ryan Sero's Romeo and Juliette: An Escapist Comedy, which was a smash at The Fringe.

"People like adaptation of $hakespeare and will $pend for it," Huh said. It was refreshing to hear an artist speak realistically about capitalism. Until more starting thinking like Esther, and less like Grant, "Art Is The New Steel," will remain, like most t-shirt slogans, amusing.

There might be other, more Shakespearean, motivations at work. I suspect Othella is, also, endeavouring to serve a point: a point which has been sharpening into an eviscerating tip, for a long, long time.

The Tragedy of Othella Moore will run from Wednesday, April 20 to Sunday, April 24 at the Staircase Theatre, 27 Dundurn Street North, Hamilton. Shows are at 8:00 PM on April 20-23 and 4:30 PM on April 24. Tickets will be $20 for regular admission or $15 for student admission, and can be purchased with cash only. Reservations can be made by emailing make.art.theatre@hotmail.com.

Interesting piece, and interesting take on the ol' bard. Hope this production does very well! Congrats to all for pulling it together.