Affordable housing is a hot topic in Hamilton right now. Indwell's new project proves it can be built affordably and to a high standard.

Yesterday, I had a private tour of Indwell's brand-new Rudy Hulst Commons on Main Street just east of Kenilworth. It's an affordable housing building that blows away any preconceived ideas as to what affordable housing looks like. 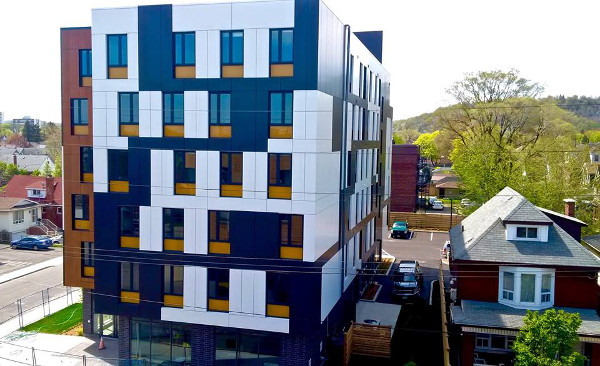 In my view, this is affordable housing that demonstrates creativity in support of dignity. I was very impressed.

1. The exterior is as good looking as - actually better than - than any new private sector condo project in Hamilton, in my opinion. The materials are first class and the combining and integrating of the various materials is extremely well done.

2. The lobby has lots of natural light and uses carefully selected materials that convey quality and permanence.

3. The elevator lobbies on each floor have a wall of windows at one end that not only let in tons of natural light, but also provide amazing views of the east end that you've never seen before.

4. The units have lots of natural light, a full kitchen/living area combo, a bedroom that uses a sliding door rather than one that swings and takes up room, plenty of cupboard space throughout, a bathroom that has been positioned to get natural light from one of the exterior windows. Small but very pleasant. All of the windows come with pre-installed roller blinds of very nice quality.

5. The 6th, and top, floor features a large common room with floor-to-ceiling glass walls on two sides that overlook the east end and the edge of the escarpment. Full kitchen, accessible washroom, computers for people who don't have their own, and a small terrace with a picnic table that looks south and west overlooking Delta High School, the stadium and downtown.

6. There's also a laundry room right next door to the common room and terrace on the top floor, with a huge double window that lets in tons of natural light. Why on the top floor? Why the window? Some of the people who live in this building have suffered domestic violence and going down into a basement with no windows does not support a sense of safety. That's why. It seems no detail is too small for Indwell.

7. The building is air conditioned, with individual thermostats in each unit.

8. Each unit is wired for cable and wifi, although Indwell is not in a position to provide it as part of the rent, making it a decision for each tenant to make (there are computers in the common room).

9. There are some units that are barrier free using Hamilton's own barrier free code that is more demanding that the province's. Getting to those units on the elevators has been thought of, too. One of the elevators is wider than the other so that people in wheelchairs or scooters can turn around in the elevator.

10. Indwell's own offices are on the main floor at the rear of the building at grade and in the lower level (which has decent upper windows that let in natural light).

What's even more amazing is that the City of Hamilton put in a total of about $300,000 to build this place. The feds and the province put in more, and Indwell raised the rest itself. Total cost of this building was approximately $10 million.

This is an example of what we need more of in Hamilton. Dedicated people who know what they're doing and who are committed to treating people in need with the dignity they deserve.

I met a guy who moved in today while we were waiting in the lobby for the elevator. He was with his dog Sam. He told me he had just taken Sam for a walk and was heading back to his new apartment. A pet-friendly building. Not sure who looked happier, Sam or his owner.

A note was pushed through the door of one of the still-empty units we looked at (although all units have been rented, some have not yet been occupied). It was from one of the tenants inviting people to come up the common room to enjoy some chili she had made just to say hello and to meet each other. Remember, the building just opened on the weekend. Just over half of the tenants were moved in by today. Already, community was beginning.

I left the building feeling a little bit emotional, to be honest. I had just visited a building where people who needed a break were getting more than that. They were getting a home they could be proud of. That wasn't cheap and nasty and built to be just OK.

Affordable housing is a hot topic in Hamilton right now. What I saw proves it can be built affordably and to a high standard.

I want to thank Graham Cubitt, Director of Projects and Development, for taking the time to show me Indwell's latest project.

They are to be congratulated. Loudly.

Update: Updated to include the name of the architecture firm and construction company responsible for the building.

Graham - thanks for sharing this well designed and important project. There is one significant omission though - credit for the architects who designed it. In this case, we have the team at Invizij Architects, led by Emma Cubitt to thank. Invizij is a local Hamilton firm filled with talented people, many of whom also live and volunteer in our community. They are a tremendous asset to Hamilton and one of several examples of why it is important to hire locally for architectural work in our neighbourhoods. The insight and care they have brought to this project is invaluable. Good buildings require good clients and good architects. This one benefits from both. Congratulations to all involved!

this is huge IMO. We seem to get so much awful, bland, gross architecture in Hamilton. This is a fantastic design and one that enhances the neighbourhood. Not a slab of beige stucco that blights a neighbourhood. Well done!

Most importantly, this breaks the paradigm of, "Good enough for the likes of you."

Its about 213,000 per unit. Annuitized that's about 900 per month plus utilities and taxes. That means no profit or mark-up and after 30 years zero value in the building meaning no repairs or improvements over 30 years as well (but you will be left with the cost of tearing it down). So, what rent are the people who live there going to pay?

Kudos to the people who raised the money!

Anecdotally, the rent for some units was in the range of that number, $900-ish per month (not sure if that was a specific unit, or an average, etc) -- but don't take my word for me, it's only what "I heard from Facebook". Some of the capital costs have already been paid outside of Indwell (e.g. government pitch-in), plus you have to throw in inflation indexing, so that is probably where maintenance costs will come from.

Also, being Indwell's great new headquarters right on the LRT corridor, we can look forward to Indwell building a few (plenty?) more of these over the years along the TOD corridors, I would imagine. I imagine that being head office, it will have a little better-than-usual maintenance attention (reputational, longevity) and lower maintenance costs (due to on-site staff).

Don't forget that the basement and ground floor house Indwell's head office, so the cost per unit would be a fair bit less than what you guys are calculating. Perhaps more in the $175K / unit range.