Remove it and They Will Disappear

If you make it easier and quicker to drive, more people drive. If it is not so easy to drive, fewer people will drive or they will drive less. The net result of reducing lanes is less traffic, not gridlock.

Over the past 20 years, the French city of Paris has been gradually and progressively reducing the priority placed on automobile movement and increasing the space given to walking, cycling and transit. 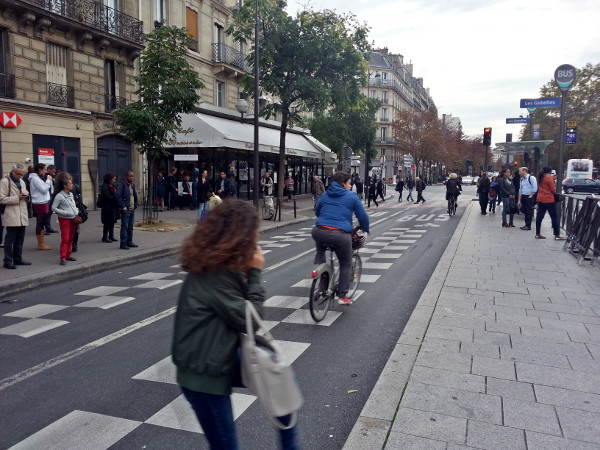 This shift started slowly under Mayor Jean Tibéri in the 1990s when some parking spots were removed, and continued under Bertrand Delanoë in the 2000s with the introduction of physically separated bus lanes, the Vélib bike share and car free Sundays. When Anne Hidalgo was elected mayor in 2014, she made reducing pollution and encouraging active transport a signature project of her mayoralty.

All this has been a big shift from previous thinking in the 1960s and 1970s which involved building expressways along the Seine, a freeway around the entire city (the infamous périphérique) and generally trying to squeeze more space for cars from Parisian streets and squares. Even the main square of the Louvre was turned into a parking lot.

Shifting priorities has involved dedicating more space for pedestrians in major city squares, and pedestrianizing some smaller streets, but Hidalgo's most controversial initiative has been to close the high speed expressways along the Seine (the "voies sur berges"). 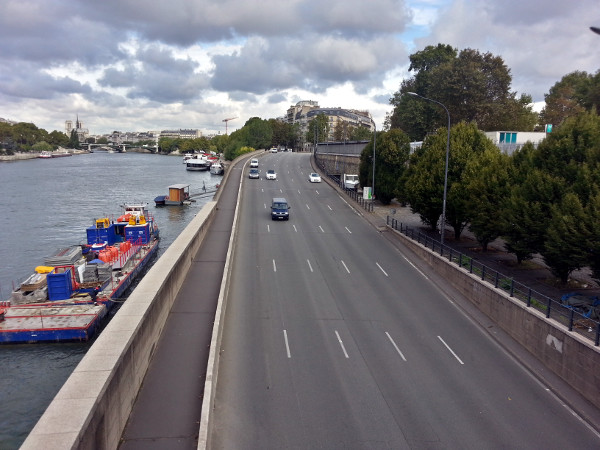 The plan is to turn these streets into linear parks for pedestrians: 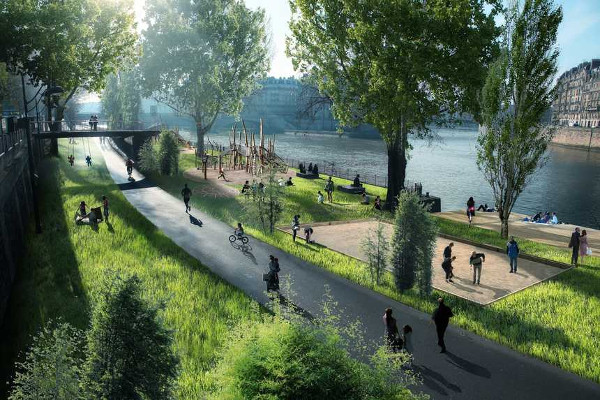 Proposed linear park along the Seine

This being France, there have been loud protests at this plan to close major expressways in a city of 2.5 million people (10 million in greater Paris). A recent article in the French newspaper Le Monde reviews what actually happened when they closed the left bank expressways and the evidence from other cities.

Opponents in Paris claimed that closing these major arteries to cars would lead to huge traffic jams, cars filling neighbouring streets and increased pollution from all the extra congestion (even though Hidalgo's goal is to decrease pollution).

(Here in Hamilton, which has almost no traffic congestion, opponents of complete streets claim that taking any space from cars will cause traffic jams and increase pollution. Indeed, a certain west mountain councillor in Hamilton recently tried to force staff to say the Charlton and Herkimer bike lanes would lead to more pollution.)

This all seems like common sense: less space for cars means more congestion and more pollution as more cars try to squeeze into less space.

However, it turns out to be completely wrong!

The Monde article quotes Phil Goodwin, honorary professor of transport policy at University College London, saying that traffic problems are only temporary and the results are far less severe than predicted.

In fact, after studying 70 cities in 11 countries, he found that traffic is actually reduced by 11 percent on average when motor vehicle lanes are removed. In Paris, the removal of the left bank expressways increased travel times by only 2-3 minutes, much less than the seven minutes originally predicted.

What happens to the traffic? Goodwin says that drivers change their behaviour.

Some people change their route. Some switch to another mode, like transit, cycling and walking. Some reduce the number or length of trips. Some try tele-commuting or carpooling. Over the long term, some people even move to be closer to their work.

In the end, it is perhaps not surprising since this is just the flip side of the "build it and they will come" phenomenon when a freeway built to ease congestion quickly fills up.

If you make it easier and quicker to drive, more people drive. If it is not so easy to drive, fewer people will drive or they will drive less. What is surprising is that the net result of reducing lanes is most often less traffic, not gridlock. 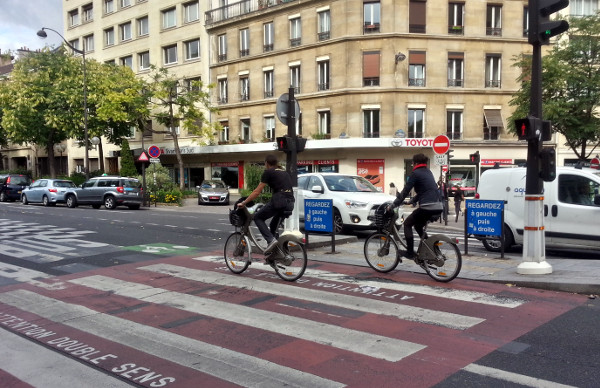 What about pollution? The claim that not prioritizing motor vehicle movement will increase pollution is often used to oppose complete streets or cycle lanes.

A 2013 study by Airparif (the Paris air pollution monitoring agency) found that in the ten years from 2002-2012, NOX emissions dropped by 30 percent and fine particles dropped by 35%. Fully a third of this reduction was due to cutting the number of motor vehicle lanes. (The drop would have been even greater except that Parisian motorists have switched massively to more polluting diesel cars.)

Overall, motor vehicle traffic has dropped by 28 percent in Paris since 2001. The article quotes Frédéric Héran, a researcher in the economics of transport at Lille, saying "disappearing traffic is not a theory, it's an observation."

The next time someone claims that removing vehicles lanes will necessarily lead to "gridlock", longer travel times and more pollution, we should remind them that experience shows it ain't necessarily so.

It is more likely that traffic levels and air pollution will actually improve. Especially if removing the motor vehicle lanes make it is easier and more pleasant to cycle, walk or take transit. 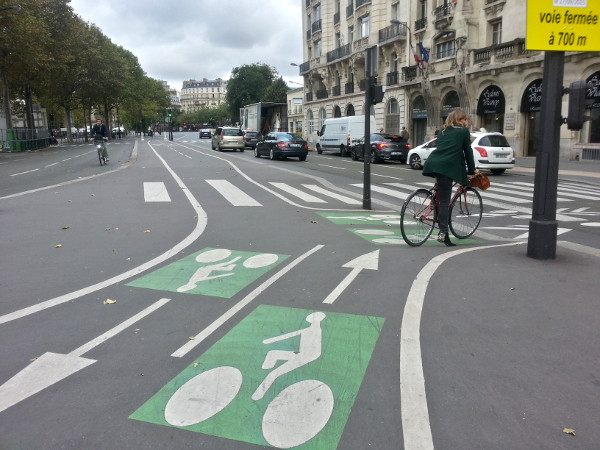 According to an article in The Guardian:

Paris city council has approved the banning of all vehicles from the major road running along the right bank of the river Seine in a bitterly contested vote.

Before it closed earlier this year for the annual Paris Plage city beach project, 43,000 cars a day passed over the stretch of road. It will eventually be replaced by gardens, parks, restaurants and cafes.

Note that the closure still needs to be approved by the prefect of police, who sees his job as ensuring smooth traffic flow, but according to a City Hall spokesperson:

The mayor is convinced that we will see the same result in terms of less traffic and lower pollution as we did with the left bank highway closure, in which case there will be no reason for the police prefect to object to it.

It is interesting to see the strong political will to pursue the strategic goal of reducing pollution and improving livability by shifting scarce urban space from people in motor vehicles to people walking, cycling, or just enjoying themselves in urban parks or city squares.

Great article! Bike lanes do so much more than just provide a safe path for cyclists. They also add much needed safety and peace of mind for pedestrians. As one who walks every where I can in Wards 1 and 2, I love the barrier of parked cars between the traffic lane and the bike lane/sidewalk on Herkimer and Charlton. It is a HUGE improvement over walking on Queen or Aberdeen where the road touches the sidewalk and cars speed by at 50 or 60 kph. And speaking of Queen and Aberdeen, both streets could be vastly improved for pedestrians, cyclists, and residents if three relatively inexpensive changes occurred: 1) make Queen St S two lanes again and two-way all the way to King, and replace the space used for the left turn lane with parking and a bike lane as the buffer for the sidewalk, 2) make Aberdeen a two-lane street again by adding parking on both sides and bike lanes, and 3)close the Aberdeen access to 403. Since the vast majority of cars coming down the Queen St hill are using Queen and Aberdeen to get to/from 403 or over to Westdale, they could then take Queen straight to King and be on their way without having to use Aberdeen as their shortcut.