Hailed by some as a feminist for her fearless autobiographical and brutal depictions of personal pain, there is no question that the rich European and Mezo-American cultures in which she lived and breathed shaped and informed her wider world vision. 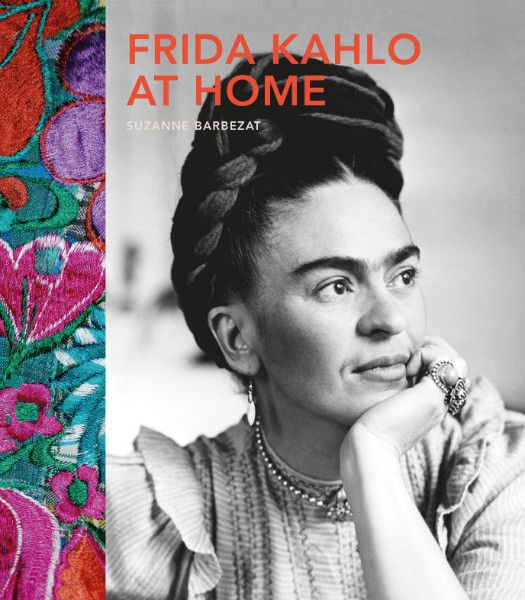 Little known beyond the art circles of her own lifetime, Mexican artist Frida Kahlo's ghoulish self-portraits throw a very long shadow today. This is surprising, given that Kahlo painted only 200 artworks during her entire life.

One third of those works were her broody, introspective self-portraits, often depicting herself in a state of physical or psychological suffering, with the majority of them amplifying mutilated, blood-gushing body parts.

Most contemporary international art critics and collectors are aware of these disturbing blood-soaked self-portraits. Yet, for all her notoriety of today - with her equally uncompromising full-frontal unibrow stare-downs - it is intriguing to note that there was only one exhibition of her art work, ever, while she was alive, in her home and native land of Mexico.

How did the current Cult of Frida develop?

It is a well-documented treasure trove of Kahlo ephemera: with striking interior and exterior photographs of Kahlo's primary residence, La Casa Azul, aka The Blue House.

The book also contains intriguing snippets of personal letters and memorabilia between herself and her husband, Diego Rivera, as well as her assorted lovers, including Russian communist revolutionary leader Leon Troksky, and the American-Japanese sculptor, Isamu Noguchi. Many exemplary chronological reproductions of Kahlo's work flush out this tribute.

As the press release states:

La Casa Azul, now one of the most visited museums in Mexico City, was the birthplace of the artist, Frida Khalo. It was the home where she grew up, where she lived with her husband, Diego Rivera, and where she died. She also spent significant periods of time in the house convalescing: first, when she contracted polio as a small child and again at the age of 18, after the trolley accident, which left her critically injured. Confined to her bed in casts and orthopedic devices and in constant pain, the bedroom at La Casa Azul is where Frida began to paint the vibrant and unflinching portraits and self-portraits that would make her name.

But who was she?

Frida Kahlo, christened Magdalena Carmen Frieda Kahlo y Calderon, was born in Mexico to a German father, Carl Wilhelm Kahlo, (who changed his name to Guillermo Kahlo when he emigrated), and a Spanish-Mexican mother, Matilde, (his second wife).

She was raised with certain privileges, attending a private German prep school, and receiving a pious Catholic indoctrination via her very devout mother. 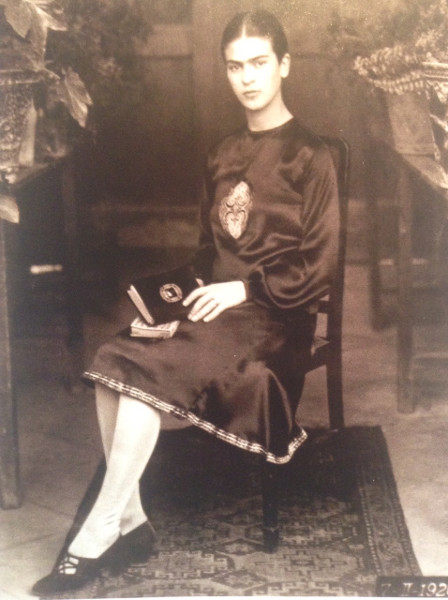 Frida only went truly 'native' after she began her lifelong association with famed Mexican artist and self-proclaimed atheist, Diego Rivera: first as his student, then later as his wife. They were married in 1929. She was 22 and he was 42.

Diego had already built a substantial artistic persona as a Mexican nationalist. He was very vocal about the class struggle and revolutionary war that defined his nation.

Magnetic, and a polarizing provocateur of the labour movement, his public mural work amplified his knowledge of Mayan traditions and mythologies, pre-and-post colonial-revolutionary atrocities, and his abiding interest in the political struggle of the working-class.

It was he who assembled the pre-Colombian art collection that now resides in Anahuacalli, their country house. (This house was completed, after they both died, by architect Juan O'Gorman and Diego's daughter, from a previous marriage.)

It was he who was "intent on ensuring his and Frida's legacy." This, even after he married his long-time mistress, Emma Hurtrado, a year after Kahlo's death.

Barbezat writes, "He created at trust through the Bank of Mexico, leaving The Blue House and Anahuacalli, as well as their contents, to the people of Mexico."

He appointed another long time female friend, wealthy arts patron, Dolores Olmedo, (and one of his earliest models), as director of that trust.

Dolores and Frida were child-hood rivals. Dolores often bought Rivera's work, and only bought Frida's work at Diego's request. "She openly did not care for Frida or her work." Nonetheless, the trust was established, and after a modest restaging, the Frida Kahlo House/Museum, aka The Casa Azul or Blue House, opened to the public in 1958.

Twelve years after her death a low-budget documentary, entitled, 'The Life and Death of Frida Kahlo as Told to Karen and David Crommie' made its debut at the San Francisco Film Festival. In 1983, a weighty biography was written by art historian, Hayden Herrera. In 2002, famed Mexican actress, Salma Hayek, co-produced, and starred in, the Oscar-winning feature film, "Frida".

Today, Frida Kahlo has been whole-heartedly adopted by a fervently nationalistic Mexican government and citizenry. They now claim her as their own. Kahlo's distinctive self-portrait, dressed as she invariably was, in the traditional Tehuana costume of an indigenous maiden, has even appeared on Mexican currency. She has achieved iconic, near saintly, national status.

Who was Diego Rivera?

Who, then, was Frida's husband, Diego Rivera? Diego was born to two middle-class teachers in 1886 in Guanajuato. His mother was a devoted Catholic mestiza (part European, part Indian) and his father, a criollo (Mexican of European descent).

When he was six, his liberal-minded family moved from Guanajuato to Mexico City. Rivera became a Marxist, and a member of the Mexican Communist Party.

In 1907, (the year Frida was born), Diego Rivera was continuing his arts and political studies in Europe. He met and became friends with several famous artists of the day, including Pablo Picasso,

Marc Chagall and Piet Mondrian. He studied Cubism in Spain and toured Italian frescos. He developed associations with European and Russian social justice revolutionaries active in the Soviet Union. He met and befriended Leon Trotsky.

Rivera's first serious government commission, in 1923, was for a series of murals for the Secretaria de Educacion Publica in Mexico City. This work soon established his prominence in what would become known as the Mexican Mural Renaissance.

Painting in a style deeply indebted to pre-Colombian culture, he created large complex panoramic images of Mexican daily life. As he wrote, "When art is true, it is one with nature. This is the secret of primitive art and also of the art of the masters-Michelangelo, Cézanne, Seurat, and Renoir. The secret of my best work is that it is Mexican."

Raised radically, he soon became Mexican to the core - and Frida adored him. 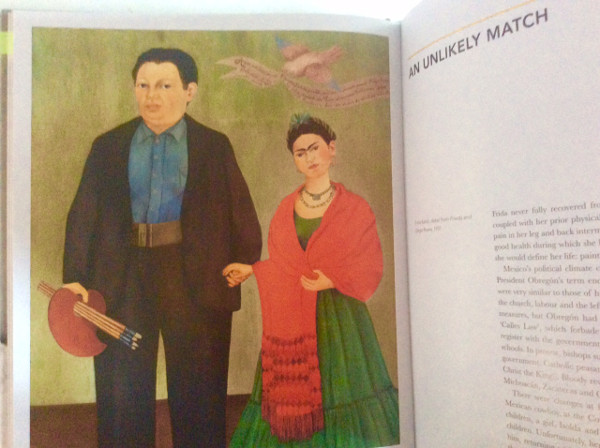 Their love story was tempestuous from the start. Kahlo, younger by two decades, also joined the Mexican Communist Party, and, though petite and frail in comparison, she soon became an enamoured disciple of this, as she wrote, "Pot-Bellied Genius".

She courted him when he was still married to his second wife, and he, impressed by her seduction and burgeoning artistic sensibilities, succumbed. Their subsequent marriage was rift with upsets, break-downs, philandering (on both sides), divorce and a re-marriage.

Over time though, they did hold on to each other. When Rivera died he wanted his cremated ashes blended with hers. This never happened. But, in keeping with both of their passionate and rather narcissistic personalities, it remained a romantic ideal.

Some could say that Rivera understood the necessity of roots far better then she did. He undoubtedly understood her dual-identity crisis. He had struggled with this himself, experimenting with European styles of painting, before embracing, whole-hog, his Mexican lineage.

Frida, on the other hand, struggled. She played the role well enough, but suffered. Always suffering. Diego would, as example, have her pose, dressed in peasant garb, for his murals. She, educated, erudite and well-travelled, would pose. 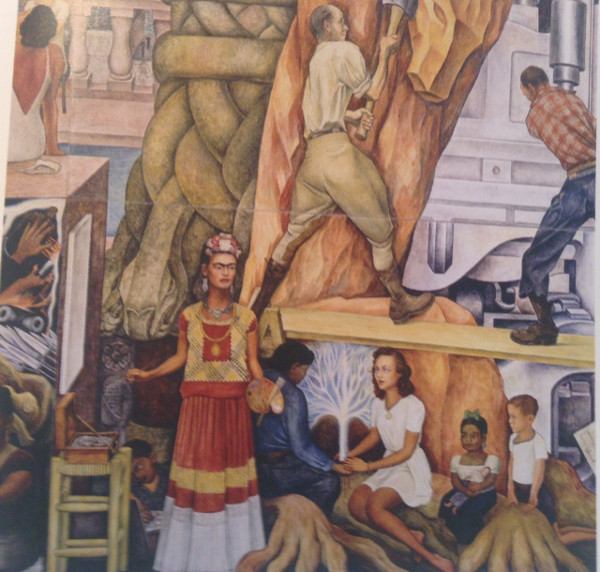 Clearly though, she was no peasant.

Truth be told, fabricating and mythologizing their lives was not beyond either of them. Frida re-invented her birth date to coincide with the National Revolution. Rivera laid claim to fighting with Zapata. Both stories are untrue.

The sole exhibition of Kahlo's painted works in Mexico City was organized near the end of her life at the National Arts Institute by an old family friend and school mate of Frida's. Not to miss the occasion, Kahlo arrived in an ambulance. She was wheeled into the exhibit on a bed.

She died several years later, in July of 1954, aged 47. Some suspect suicide. It is common knowledge that during the last years of her life she lived on pain-killers.

Her deteriorating condition, including the amputation of her leg, severely diminished her focus to produce any new work. Instead, she wrote and drew in journals. Many are now preserved in the Blue House.

Kahlo's art constantly shows the struggles she endured through various stages of identity. After the Revolution, in 1922, when she was fifteen, she was one of only thirty-five girls admitted to the newly formed National Preparatory School.

She studied the natural sciences there in the hope of advancing into medicine. However, after a childhood bout of polio that shortened and damaged her leg, and the later bus crash that battered her body, leaving her spine, pelvis and collar bone broken, she was often sickly and bed-ridden.

It was during the latter recovery, while convalescing, that she began to experiment with paints.

Her self-portraits display the conflicting realities of two opposing world views. Euro-petticoats and hand-plucked lace versus Mexican-peasant garb and hand-woven cotton. Quite often there is gushing blood everywhere. 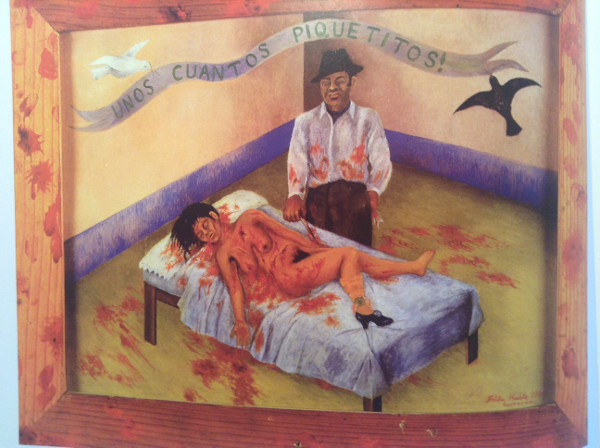 'A Few Small Nips', (1935) by Frida Kahlo. Now in the collection of the Dolores Olemedo Museum, the original Trustee of Rivera's Estate. Note Frida's euro-style shoe.

Looking at the reproductions of her paintings in this book, it is apparent that Kahlo created a kind of hybrid and, to my eye, pseudo, folk-art.

Some art historians and personal friends, like French founder of the Surrealist movement, André Breton, tried to place her style into the Surrealist camp. (He arranged her first exhibition in France.) But it is a label that she herself vehemently rejected. Mostly, her work was private and obsessively autobiographical. 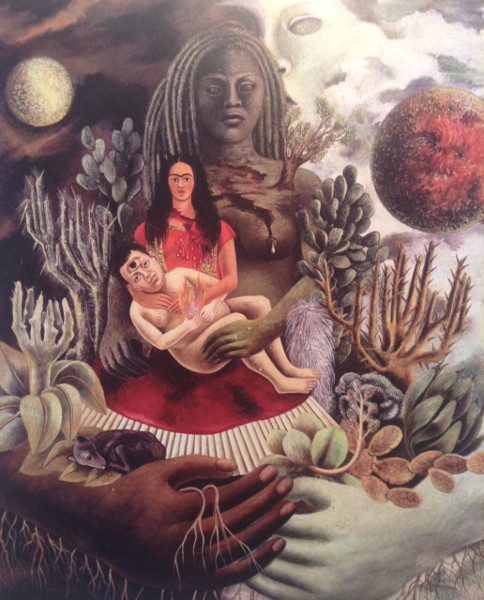 Now, in 2017, from the vantage point of Canada's current cultural perspective, especially in the wake of the recent Joseph Boyden native-ancestry imbroglio, Frida Kahlo could undoubtedly be dragged over hot coals for so openly impersonating, expropriating and interpreting the indigenous culture within the boundaries of the country where she was born and raised.

Rather than revered as a national cultural icon, she could just as easily be vilified as a Settler Expropriator.

Many post-colonialists would unequivocally agree: both she and Diego were expropriating Settlers. But, within the ever-spinning politics of the Greater Good of Nationalism, most Mexican nationalists - evolving within their own young democracy - would argue that, no, she - and he - were not expropriating anything.

As artists of their day, they represented the new and emerging Mexico, freed from the shackles of early colonialism and class servitude.

Putting aside the topsy-turvy push-and-pull politics of contemporary nationalism, Frida was very clearly her own woman with a unique, albeit exceedingly eccentric, outlook on life.

Hailed by some as a feminist for her fearless autobiographical and brutal depictions of personal pain, there is no question that the rich European and Mezo-American cultures in which she lived and breathed shaped and informed her wider world vision.

Barbezat's book is full of well-researched trivia that adds yet another layer of historic sediment to this now very identifiable Mexican artist. Semi-deified within the lexicon of Mexican history, Kahlo's cremated remains lay at rest, entombed in the Blue House Museum.

Frida Kahlo, artist - and forever the wife of Mexican artist, Diego Rivera - could never have emerged from anywhere else. 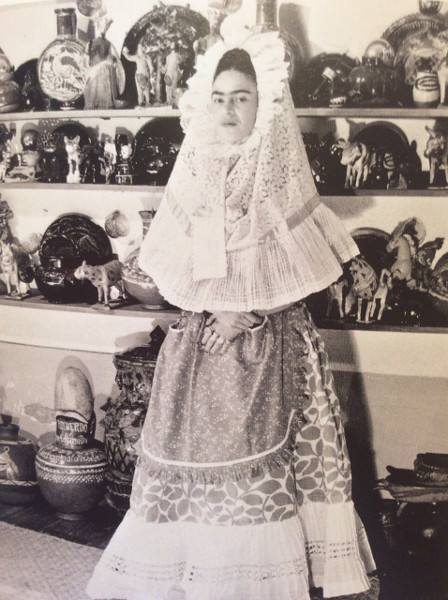 Frida, at home, in the Blue House, dressed in traditional Tehuana garb, circa 1940.