Last Chance to Save the Lister

With the City Council vote on whether to deny LIUNA's demolition permit set for June 12, the fate of the Lister Block hangs in the balance.

[Ed. Note: this article was actually published on June 1, 2006. The incorrect posted date above is due to technical limitations of the website.] 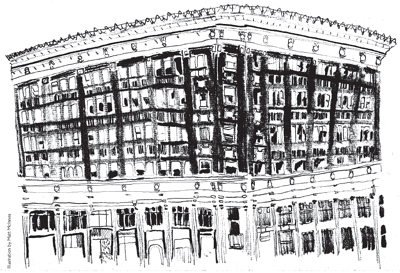 I admire the strong position people have taken on restoring the Lister project, however, upon seeing this opening page I hope to never hear RTH authors complain about biased reporting from the Hamilton Spectator. Having RTH Staff, not an individual author, throw their support to one side of an argument, makes this publication's agenda transparent and makes it less objective than RTH's nemesis, the Spec. I'm sure the hypocrisy is not intentional, but it's present nonetheless.

For the possibly small minority of RTH readers who want to see Lister rebuilt, go to http://www.buildlisternow.ca.

RTH--keep up the good work, anyone whose heart is with making Hamilton a great city should be commended, but please recognize that not all of your readers agree with the position your authors take, and some of us would like more balanced reporting.

The illustration on the poster is awful.
It reinforces LIUNA's view that the building is a decrepit eyesore and beyond repair.


In response to the person who said the illustration was awful - I'd like to point out the artist was evoking the spirit of the place. The illustration was not to be confused with the rendering the developers have offered up. I like Matt's work alot and he is actually showcasing his work next Friday, June 9th at Mixed Media, 174 James St. N. 7 - 10 pm. Come on out and do the art crawl!

Thanks for clarifying these issues, Ryan. I do appreciate your thorough reply.

Perhaps 'balanced' was not the best word choice, because I agree with you completely that many journalists who aren't knowledgeable about a topic end up skewing the truth by trying to be balanced. 'Objective' is what I meant. Taking a side, and providing evidence for that side is perfectly legitimate, however, there must be some objective arguments supporting the reconstruction of Lister. Here's my attempt (btw I make no claims of being an expert on this topic)...

I want to congratulate you on your candor regarding RTH's agenda, both on and off the Lister issue. I applaud RTH because in essence--at it's core, RTH is pro-Hamilton. We all sometimes differ on what the most pro-Hamilton solution to an issue is, but the spirit of the argument--wanting what's best for the city--I think that remains close to all of us as we debate here.

I believe in restoration where possible and celebrate adaptive reuse. There have been many great examples in the city--from the Piggot/Sun Life condos to those at the architecturally less significant Alexandra Square/Undermount complex. Both rail terminals are back in use, both restored, albeit for differing purposes. I have a strong personal affection for Lister--I was a rural/suburban kid who's parents were smart enough to have us spend lots of time in the core in the 70s and 80s--and I remember the Lister in it's fading glory. The truth however, in spite of all the positive recent news, is that downtown has fallen a long way for many years. Developers and their lenders simply aren't sold on the future downtown--though a few have been encouraged by generous city incentives, which is great news. The Lister for all it's significance and beauty, has become an albatross around the neck of redevelopment downtown. While the reasons for it being in it's current state are open to debate--the fact of it's condition is plain and simple. The rebirth on James North is separated from the King Street corridor by black holes--namely the Lister and the now missing Tivoli lobby. If "sacrificing" the Lister means a replicated building with great Class "A" office space, vibrant street level retail and a reconnection to James North and King William--the sacrifice of losing the original will be worthwhile. Waiting years for some other redevelopment scheme to get off the ground will be suicide--and homocidal to the many surrounding buildings which have held out hope for the Lister's redevelopment.

If a new Lister brings warm bodies and dollars to the James North/King William/Jackson Square area--maybe efforts to save and redevelop the Tivoli can find some footing (and funding). Taking the time and energy to save the Lister and redirecting at the Tivoli might save the jewel from an ignoble fate also.

Though arguments can be made that there is a glut of office space downtown--much of what is vacant is Class B space--there is a lack of Class A space to some degree--and this prevents the city from being able to attract new tenants to the core. Any hope that a resurgent Stelco or Dofasco/Archelor/SeverStal might be lured back depends on Class A space. LIUNA and HiRise want to construct this space downtown--when they could easily make a far more reliable business case for building Class A space elsewhere--in what you refer to as Sprawl areas such as Ancaster, Stoney Creek or Burlington. In that sense, I think this proposal fits exactly with RTH's agenda.

Continued thanks for your support and acknowledgment of differing ideas and opinions here. Debate like this is healthy afterall, and a signal that there are many people that care about this city's future.

For what's it's worth, I'm a writer here at RTH and still haven't made up my mind about this project. On one hand I would LOVE to see the building restored, but I don't think downtown businesses (and overall image) can take another ten years of a rotting Lister. It's no coincidence that many downtown businesses are supporting this plan. It's doable, financially feasible (no kidding) and will lend a massive shot in the arm at the very heart of our city....Stand at King and James and scan the horizon for the dominating scenes...Lister, only one block north, is one of them.

I agree with Jason. This is a big deal for the downtown. We need to get past this for good. I don't want to see this hanging around anymore. Even I bet people hearing about a new Lister will help bring people downtown just to see whats going on.

This is a big piece of the puzzle. As a part of the younger generation I would perfer to see this progect move forward rather then sit in Neutral.

So, they had a big meeting at City Hall about the Lister yesterday (June 12). Can anyone describe what took place? Was anything decided?

Well - I guess I can represent the guys from Raise the Hammer (as no one was there!) and say it was entertaining, disgusting, angering and VERY long!

We were there from 3 pm - 11 pm and I gotta say some of those councilors have no respect and if I was represented by someone who didn't even have one word to say about the entire process - I would be a very upset citizen!

Terry Whitehead was disrespectful, non-sensical and at times spiteful and he deserves to be voted out this November. Yes Terry we understand you like to have the final word in every conversation - but did you really need to comment after every speaker?

Larry was making snide remarks after speakers talked and a few times had the gallery on their feet asking him to apologize. There is absolutely no reason for him to be throwing in comments about someone's position or what they just said.

Dave Mitchell had his head in the clouds.

Sam Merulla was Sam Merulla. Not paying attention to most of the speakers and only taking notice when he felt he was being attacked. Checking his Crackberry constantly and feeling the need to bother Brain McHattie.

Someone please tell Tom Jackson that white shoes are not permitted in City Council Chambers. Save it for the docks Tom!

I just want to say way to go Margaret McCarthy! Asking the tough questions and standing up for fiscal responsibility!

What are some of these guys and gals gonna do for jobs when they are booted out of office? No one in their right mind would want some of the personalities that currently occupy City Hall. This city is only going to change when we vote in people who can actually do the job and are passionate about the city.

If I hear one more comment about how Europe re-built their cities after the war I am gonna scream! According to officials and downtown business owners, Hamilton is a now wartorn city...sheesh!

Hopefully it all comes out when CATCH transcribes it...

I, too noticed a few weeks ago that Merulla is addicted to that stupid crackberry during council meetings and never shuts up...if I was McHattie I'd ask to switch seats...you know, like we had to do in grade school when sitting next to some goof who kept getting the both of us in trouble by never shutting up. Talk about a salary for doing nothing.

I agree that a definite plan to restore the Lister is needed. We only have 60 days, but it's taking shape. The biggest thing in it's favour right now is the James North Art Crawl which FILLED the street with gallery hoppers last Friday night. If the restored Lister Block was included in that picture, it would draw people from everywhere!

- A renowned architect has volunteered his time.
- A respected developer has said "any developer would jump". If Liuna is to be out of the picture, other developers will step forward.
- McHattie's plan can work - the city buys it, leases cheaper elsewhere and still saves money. The city can fill some of that empty office space. Triple A is for businesses that pay for it out of their profits!
- The James North BIA needs to open their shops Friday nights, and get with the program and support the new entreprenurial business people who are revitalizing James North. A tickytacky replica office building is filled with people who go home at five o'clock. Other than an hour at lunch, the 'Lariuna' plan is a death knell to businesses on James North and King William.