Through the years, the COMC has been known in the community as the "men who love to sing," performing numerous concerts around the area every year and occasionally touring internationally.

By Mackenzie Kristjon Jenkyns
Published May 08, 2017

The Canadian Orpheus Male Choir, formed in 1977 by Lyn Harry, is proud to celebrate its 40th Annual Concert coming up May 13 at the Westdale United Church. Through the years, the COMC has been known in the community as the "men who love to sing," performing numerous concerts around the area every year and occasionally touring internationally, most recently in Ireland in 2015. 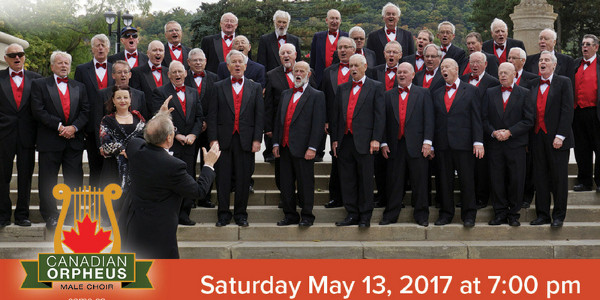 I spoke with Rod Roberts, President of the COMC, and Simon Irving, Musical Director, in separate interviews.

Speaking of the 40th, Rod said, "It's another milestone. I've been in the choir for a long time and seen the 25th and the 30th and now we have the 40th! It's quite an accomplishment, actually, because choirs evolve over time and gain members and lose members so I'm pleased to see we've made it this far. We've got quite a year ahead not just for the choir for our 40th but also for celebrating Canada's 150th with a special concert in October."

Naturally we discussed singing. Rod sings tenor. "I started off as tenor two but now am tenor one -and it's easier! I get to sing the melody most of the time as opposed to trying to harmonize as you do in tenor 2 and of course the baritones. I think tenor one and the bass are probably the easier parts. You can tell by the amount of time the music director has to spend with them."

At the Annual, people can expect to see two soloists, Margaret Bardos and Loralee McGuirl, each of whom has sung with the choir over the years. Also there will be a set from the Lads & Gents, which is a young male choir within the Hamilton Children's Choir. The idea is that boys between 8 and 18 can develop their choral instrument as they are changing into men's voices.

Simon Irving, Music Director, indicates that the material will be a variety of styles that the public will enjoy. "One of the pieces we'll be doing that the choir really enjoys is 'Kings of Swing' which is four different songs as a medley. It's classic stuff like 'Begin the Beguine' and ... 'Moonlight Serenade' if you can believe that. We're also doing a medley from Les Miserables or Les Miz as we call it."