This is a loving Metis family to be reckoned with. Hear their message and spread the Ghostkeeper word.

Shane Ghostkeeper and Sarah Houle are partners in life, art and music. Their band, Ghostkeeper, has been invited to play at Nathan Philips Square in Toronto as part of the Canada Day Sesquicentennial Celebrations on July 1. This Metis couple have quite the story to tell about their journey together. 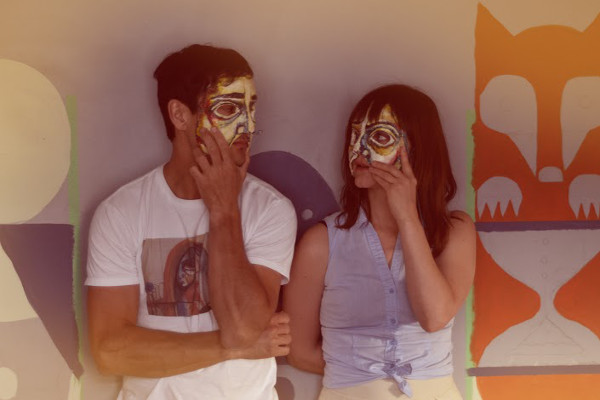 Shane came to music late in life after high school and welcomed the new challenge. He enjoyed writing funny songs to make his peers laugh and really enjoyed doing old country covers. Then, at age 20 he met Sarah and fell in love "with a very practicing, established artist."

Shane's encounter with Sarah was the first time he had met a legitimate artist and that was a big deal for a bush kid living eight hours north of Edmonton on the Metis settlement of Paddle Prairie, Alberta.

Born with a roaming spirit, Sarah moved around a lot during her early life and later for her schooling. She is a city girl, but with roots firmly planted in her home base of Paddle Prairie. High school was in Victoria, British Columbia. Then, there was time spent at the Nova Scotia College of Art and Design in Halifax, as well as additional studying at the Alberta College of Art and Design.

Sarah, an established visual artist, dramatically changed life as Shane knew it. Sarah focused on mixed media, photography and visual arts, as well as music, which made her ideal for creating art for the band's record covers, t-shirts, and Aboriginal masks.

It was after meeting Sarah that Shane became serious about his music. Her influence made their music more meaningful. With four original songs and the goal of becoming musical artists the pair moved to Calgary to perform at open mics. With the unexpected help of some very good people they were able to realize their dream.

Because he was older when he began composing and playing music, Shane hadn't learned traditional Metis and Indigenous styles. Instead, the couple eagerly dove into their own sound creating original music which incorporates mystical sounds.

Their naive approach to music meant the band was making records before they really knew how to play. It was a fantastic learning experience that allowed them to focus a light on the modern Metis experience. Ghostkeeper really romanticizes and glorifies the Metis experience.

On their first album, Sheer Buffalo, the couple created the characters Sheer Blouse (Sarah) and Buffalo Knocks (Shane). Buffalos Knocks is the literal benevolent warrior. He is a non-violent, singer, song writer, protestor, set on peacefully sabotaging the development of the oil sands. In essence, Buffalo Knocks is a revolutionary. Sheer Blouse is his partner in every sense of the word. They are the consummate couple.

Shane grew up knowing he was Indigenous, which led to an honest and real perspective of life in Canada and the current 150 celebration. The band's celebration is not patriotic, nor born of hatred; instead it's an impactful non-celebration of Canada's 150th that is executed in a catchy, fun, entertaining, sincere, non-angry way.

According to Shane, Ghostkeeper's artistic agenda is, "To become better musicians, achieve label support, increase their audience, and dig deeper into a reflection on both the historical and modern Metis people's participation in artistic culture."

Always looking to the future, Shane and Sarah have a five-year-old son, Vittal, named for Shane's paternal great grandpa Vital. Vittal is already an artist in his own right, having created wonderful pieces of art, movies, videos, and music. Vittal is also expressing an avid interest in science.

Ghostkeeper has a realistic, pragmatic view for our collective future. As Shane describes it, "The Truth and Reconciliation recommendations have influenced our music and art. Our art is global in its reach with the aim to get to know each other in the name of survival. Unity is the desired goal."

In his view, Shane believes that settlers of Canada can "reflect on the truths of the past and educate themselves. The gravity of the residential school system is unimaginable for non-Indigenous people. Racism dehumanizes Metis, First Nation and Inuit people.

When you see an Indigenous person living on the street, try to imagine yourself in their situation. When children are removed from a community to attend residential schools, the outcome can only be disastrous. Whether they are a man or a woman, they are down and out. Street Aboriginals have a different perspective. But, also try to connect with the progress Aboriginal communities are making. There is a lot of strength and family values in Metis, First Nation and Inuit people.

Shane believes, "Too often the media focuses on the darkness. It's time to focus on the light."

Sheer Blouse Buffalo Knocks picks up the narrative laid out in last year's Sheer Buffalo and continues the dystopian story of the characters Sheer Blouse and Buffalo Knocks, spiritual explorer of realms and benevolent warrior chronicling their battle against environmental destruction and the burden it places on their home land in northern Alberta.

This is a loving Metis family to be reckoned with. Hear their message and spread the Ghostkeeper word.

This article was first published in *The Anvil, June 2017 edition*