Yesterday, Hamilton Bike Share officially launched their Everybody Rides Initiative (ERI), which is designed to extend bike share to marginalized Hamilton residents and improve the social equity of this publicly funded transit system.

ERI is funded by the Federation of Canadian Municipalities Green Municipal Fund, the Hamilton Community Foundation, the Losani Family Foundation Fund and the City of Hamilton. It includes subsidized memberships for low-income residents, translation services and cycling workshops.

In contrast (literally) with the current dark-blue-and-white bikes, the new bikes are painted white and dark blue with black fenders.

Functionally, the shifter on the bikes' shaft-driven drivetrain has been upgraded from three to eight gears.

I managed to find a new bike this afternoon and took it for a spin to try out the new eight-speed shifter. 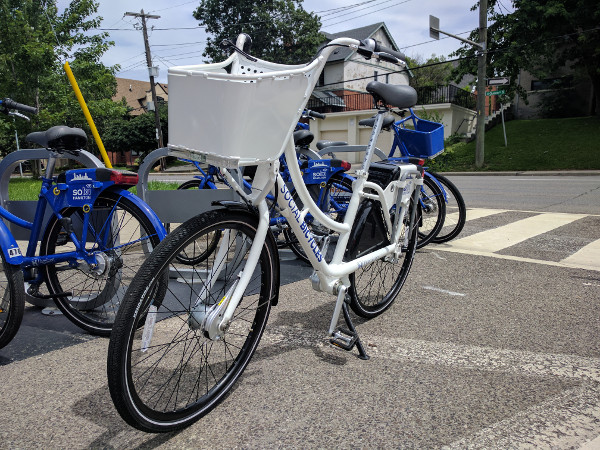 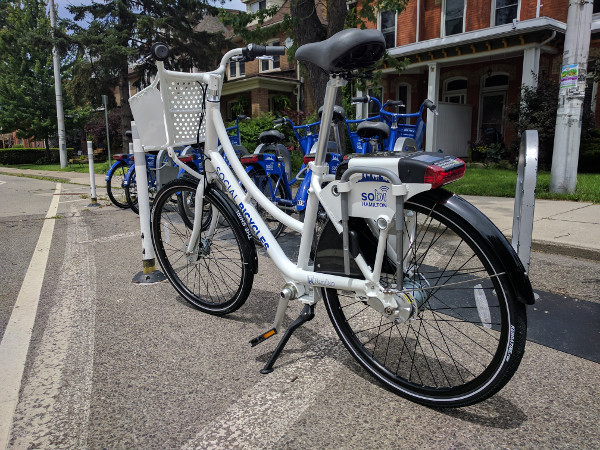 The frame, seat, handlebars, tires, pedals and bell are still the same, and the new bikes still have the low centre of gravity and extremely stable, comfortable ride to which SoBi members are accustomed.

Unfortunately, that means the bikes are still too big, even with the seat all the way down, for many people who are shorter than a little over five feet in height.

As for the ride itself, it may just be because the bike was new, but the pedalling, turning and braking all felt particularly tight and functional.

As for the new eight-speed shifter, shifting between gears is very smooth. (Note: with a shaft-driven system, you need to pause from pedaling while shifting in order for the next gear to engage.)

If anything, shifting might be a bit too smooth. The gradients in the ratio of pedaling cadence to wheel rotation were so tiny that I had to shift multiple times to notice an appreciable increase in mechanical advantage. 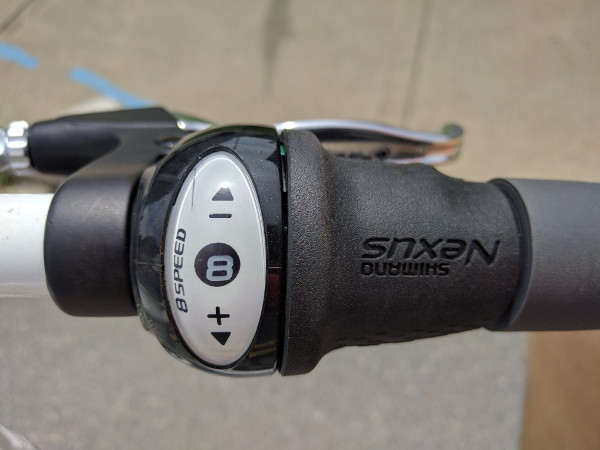 To test this, I took the bike up the steep hill on John Street South from Charlton Avenue East to Rockwood Place south of St Joseph's/Arkledun. Sure enough, the first gear was low enough to enable me to stay on my bike even where the street became very steep.

I'm inclined to conclude that an eight-speed shifter is slightly overkill and that a five-speed would be plenty - but that's really just an observation, not a complaint.

Another nice improvement to the new bikes is the steel baskets on the handlebars. The old baskets have very large gaps in the bottom - a design decision intended to discourage the use of bike baskets as garbage cans.

Unfortunately, the result is that they are not very useful for carring anything smallish. I've tried to stow bags of groceries in the baskets only to have everything start to fall through the bottom.

I'm happy to report that the steel baskets on the new bikes have a fine mesh that actually allows them to hold small items.

This may be a small fix but it makes a big difference in the bikes' overall utility for running errands. 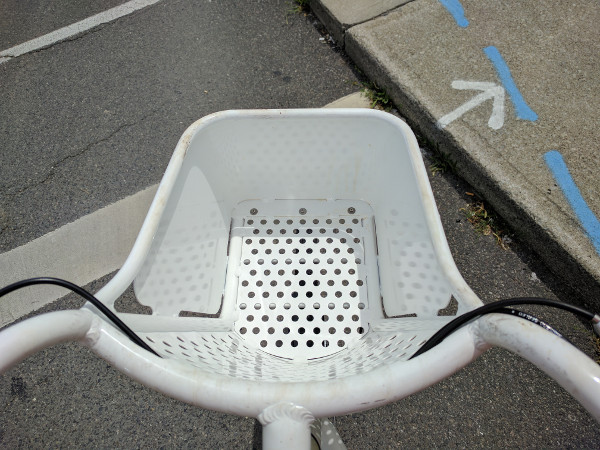 Overall, it's great to see Hamilton Bike Share continue to push the envelope instead of resting on its laurels. North American bike share systems have a significant social equity problem and it's encouraging that HBS is taking meaningful steps to address it head-on.

In another sign of its commitment to social justice, HBS has taken the step of posting a land acknowledgement on the new ERI hub stations:

Hamilton Bike Share acknowledges the land on which we ride our bikes is the traditional territory of the Haudenosaunee and Anishinaabeg. We implore all fellow settlers to learn about what it means to be a guest on this land, and to honour their responsibilities to care for this land and uphold the treaties.

Social justice is a moving target, and it is encouraging that an organization dedicated to healthy, safe, environmentally sustainable travel recognizes that its activities are undertaken within the larger context of creating a more humane, inclusive world. 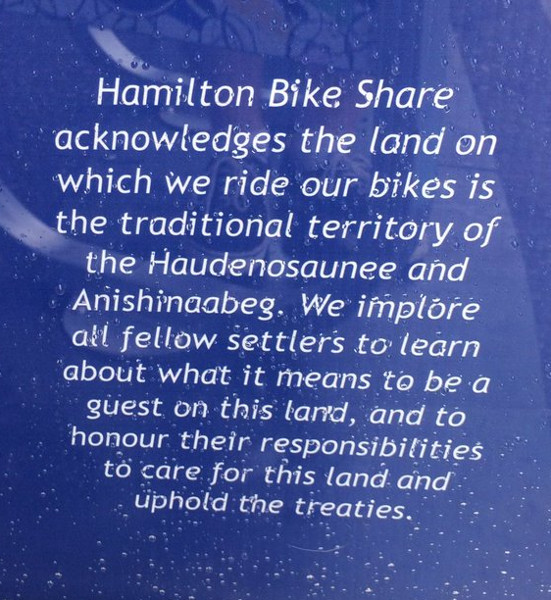 Update: this article originally stated that the land acknowledgement is posted at the Hamilton Bike Share office on Catharine Street. In fact, they are posted at the new ERI hub stations. RTH regrets the error.

Hopefully a Claremont cycle track and some corresponding stations up the mountain will make these new lower gears worthwhile. Personally, I would've liked the roof raised a bit with the gears - I found I was often looking for a 4th. Also, I hope the new gearshifts handle winter a bit better - that and the LCD displays were the big problems in the cold.

Aside, not to be negative-nelly, but am I the only one who thinks they look a bit... morbid? I mean, they're not just white, the white-on-white of the basket makes me think of ghost bikes.

" ... the traditional territory of the Haudenosaunee ..."

This makes a bit of a mockery of the "traditional territory" acknowledgements, doesn't it?

But back to the new bikes, I am wondering ... is there a general move from 3-speed to 8-speed hubs for SoBi Hamilton or SoBi systems is general?

very nice article. It inspired me to check out the new bikes on a brief visit to Hamilton today. https://jnyyz.wordpress.com/2017/08/07/h...