Ben compares Hamilton with other cities in which he's lived, and highlights some lessons for the Hammer.

After a recent bout of career fatigue out I was instructed, by one of the many "beat the burn out" type books I was reading, to watch my kids at play.

"Watch how they have fun," the book suggested, "and learn."

So I did. Over the course of a week I took my kids to the park, the beach and the back laneway to play:

It certainly was fun. But, more importantly - what did I learn from all this?

Well, I learned that kids love to have fun - lots of fun. It's like they're addicted to it. I also learned that while Dad was busy thinking about trivial things like, oh I don't know - consequences, my kids were all about spontaneity and fun at all costs. As the games progressed I began to realize just how tedious being a 'growed up' can be, especially when you forget how it feels to just let go and allow yourself a little uninhibited excitement.

And this is where our towns - the places where we choose to spend most of our lives - come in. Our ability to have a decent quality of life, chill out, kick back, and have some fun depends very heavily on one simple thing: where we live.

In my fun factor scale, I pitted four cities against each other, to see which of them would be crowned the, Fun Factor Champion.

I selected Hamilton, Leeds and London in the UK, and Toronto, for my Fun Factor face-off. I have lived in all of these towns at one time or another and consider them all to be fun loving world class cities in many ways.

The winner, by a landslide, was Toronto. While I had an inkling that this might be the case, (Toronto is the only town I have lived in on three separate occasions), I did my best to complete the assessment with an open mind.

Despite Hamilton's failing grade I'm not going to bash my old town today. In fact, as I analyzed the results I found plenty of reasons for optimism.

Here is a sampling of what I found:

Hamilton scored highest, or equal highest, in 6 out of 34 Fun Factors. These included Walks/Trails, Bike Paths and Safe Streets. Hamilton was also somewhat even in 4 out of 34 factors, including the Music Scene, and building architecture.

This was not surprising to me. It has long been argued, here at RTH, and more widely during last years Hamilton Spectator sponsored 'Big Idea' series, that Hamilton has a wealth of natural beauty and architecture to draw upon.

From my new home in Toronto I can only look back in envy at the City of Waterfalls with its still pristine stretches of waterfront (Stelco excepted) and amazing streetscapes. I have always contended, as has Jason Leach and more recently AGH architect Bruce Kuwabara, that Gore Park could be one of the most inspiring people places in Canada. 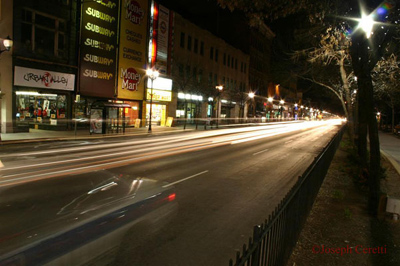 While Hamilton may be flagging in the fun factor stakes today, we know for one thing for certain - it doesn't have to be that way.

The top score was awarded to Toronto and its world class transit system. 'World class' might be of a bit dizzy statement - I awarded it 7 out of 10 - but it's clear that TO is much more adept at moving its people from A to B than any of the other cities on my scale. Living without a car is the most critical thing to me and no place I know facilitates this better than Toronto.

Note to the HSR: Hamilton scored 29 on transit - 7 times less than the Toronto. Until the Hammer gets some transit oriented neighbourhood planning and a Light Rail or Subway system in place, this score is unlikely to go any higher.

Toronto also garnered the second highest score on my scale - 188 for Shopping and Market Places. Hamilton earned 94. Perhaps this is due to the fact that I now live right behind the St Lawrence Market in Toronto's downtown, but it may also be due to the fact that Hamilton's historic market place is located in an underground parking lot. Do I need to say any more…?

Lastly, the availability of well paid employment earned my third highest scores, this time for London, Leeds and Toronto - all with 144 points. Hamilton brought up the rear once again, with a paltry 62.

This is probably due in part to the size of the respective towns - Hamilton has less than half the population than any of the others. However, my scores were also based on the diversity and quality of the local employment on offer. During my time in the Hammer the most contentious employment debates centered around jobs in the meat processing industry, warehouse distribution, and malls.

As a new resident seeking employment in the IT sector this suggested to me (rightly or wrongly) that I should probably be looking elsewhere for any above minimum wage technical employment.

The biggest disparity between all of the towns assessed was down to Hamilton's old nemesis - the downtown. With a score of 35 out of a total 371 awarded, the Hammer drew less than 10 percent of the total vote for this category. The criticality of hip and hopping people places cannot be discounted, and it here more than anywhere else, that Hamilton does not dare to compare.

So what are we to conclude from all this? Well, it's seems pretty simple to me: Hamilton needs to have more fun. Just like Annie, Jack and Molly scurrying from the Sea Monster, Hamilton needs to feel young again.

And she needs to start now. During my short spell as a Hamilton citizen I witnessed an alarming rate of decline including the razing of Red Hill, the collapse of the Tiv, the demise of several festivals and the unabated development of energy-sapping urban sprawl.

Fun is an essential component of every person's quality of life and an integral part of a successful city. Here's hoping Hamilton starts having a little more very soon.