Standing in Solidarity Against Violence

The vandals threw rocks at people. It is only through luck that no one was hurt by flying glass.

On Saturday, March 3, I heard a lot of noise from Durand Park, which is next to where I live. But I did not think very much of it, because there is quite often noise in Durand Park on a Saturday night.

It was only when I went to church at St. John the Evangelist on Locke Street the next morning that I found out about the vandalism the night before.

So after church I went across the road and wrote on the plywood covering one of the windows of Donut Monster. I wrote, "I stand in solidarity against violence." To this statement I signed my name, clearly and legibly, in black ink. 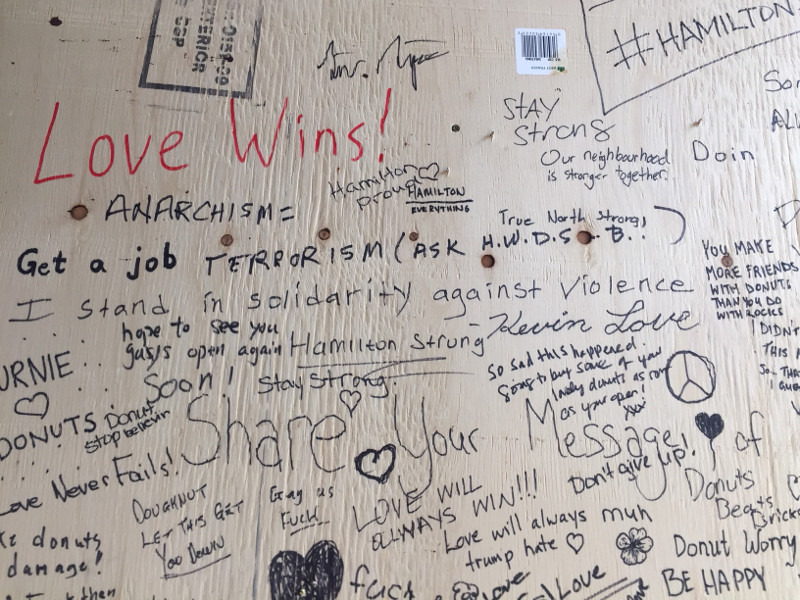 Messages of support on the plywood window covering at Donut Monster

Some people may say, "Hey Kevin, property damage does not count as violence."

Now it is true that the government of Canada defines violence as "Force applied to a person without their consent." But the vandals did throw rocks at people. It is only through luck that nobody was hurt by flying glass.

Indeed, the Canadian National Institute for the Blind was founded because so many people were blinded by flying glass in the Halifax Explosion of December 6, 1917.

Perhaps one or more of these vandals may come to read this article. If so, I would like to send them a message. Here it is.

If you want to talk about how to do this, I may be found next Sunday, March 11 at 11:00 AM in this church. All you have to do is walk in and ask any of the ushers for me. Let's talk! Remember, no matter what you do, Jesus still loves you. And so do I.

Thanks for sharing Kevin. You have offered perchance, the only solution to this and many other problems facing mankind today. IT is spiritual, not philosophical. Many will follow genius, few will seek wisdom.

A few commandments were broken I'm sure but I can think of two: Do not bear false witness against thy neighbor nor covet what belongs to thy neighbor. Covet also means to begrudge or spoil for.

Clearly these perps are covered in darkness and demon possessed, for whatever reason. Ephesians 6 may offer some insight.

Yes, I rather agree with Ryan's analysis of who these people are. Their families may be wealthy in financial terms, but spirituality impoverished. Living lives that are empty of meaning, they seek to create some meaning or identity for themselves through destruction. And yes, it may feel good in the short term to break things. But their professed goals are profoundly contradicted by their means used to achieve them.

For example, protesting against gentrification in Durand Park is mildly absurd. That neighbourhood was gentrified in the '80s... the 1880's. :)