Doug Ford is a Dignity Wraith

For as long as Doug Ford remains leader the PC Party, we can expect the sad, inexorable humiliation of formerly-respectable party members to continue.

Coming into the orbit of Mr. Trump, taking his yoke as it were, requires not only total submission, a total relaxation of every muscle and defense but a farewell to all independence and dignity.

A Dignity Wraith is a leader so narcissistic, so toxic, and so shameless that it is impossible to work for him and emerge with one's dignity intact. In order to carry out the Dignity Wraith's bidding, you must abdicate your principles and abase yourself.

You must go out with a straight face and square the circle of his outrageous and contradictory claims. You must enthusiastically pile on whoever he has decided is his enemy today. You must obfuscate, equivocate, prevaricate, dissemble, disinform, falsify and outright lie to bolster his own lies, while at the same time praising his great leadership.

Whether it's Sean Spicer slaughtering his own credibility on the altar of Trump's ego, or Ted Cruz working the phone lines for the man who accused his father of killing Kennedy, or Mitt Romney groveling for a cabinet position after calling Trump a fraud, or Rex Tillerson getting fired on Twitter after eviscerating the State Department, or Paul Ryan slithering off to spend more time with his family after a year of licking Trump's spittle, everyone who decides party is more important than principle ends up losing both.

This is true of all Dignity Wraiths, not just Donald Trump, and the same grisly act has already begun to play out here in Ontario under Progressive Conservative Party leader Doug Ford. Ford is profoundly dishonest and abusive, and it is inevitable that anyone who decides to stand by him will end up having to lie, dissemble and contort on his behalf.

This week, a video was leaked of Ford promising a group of rich homebuilders that if he is elected, he will open up "a big chunk" of the Greenbelt for new sprawl development.

Here is the text of Ford's statement:

We will open up the Greenbelt - not all of it, but a big chunk of it up - and we're gonna start building. And making it more affordable. And putting more houses out there. The demand for single family homes is huge, but no one can afford 'em, so we need to start buildling affordable housing. I've already talked to some of the biggest developers in this country. And again, I wish I could say it's my idea, but it was their idea as well. 'Give us property, we'll build, and we'll drive the cost down.' That's my plan for affordable housing.

The Greenbelt is a legislated system of local farmlands, wetlands, lakes, river valleys and sensitive wildlife habitats that are protected from urban development. It was established in 2005 and comprises more than two million acres. 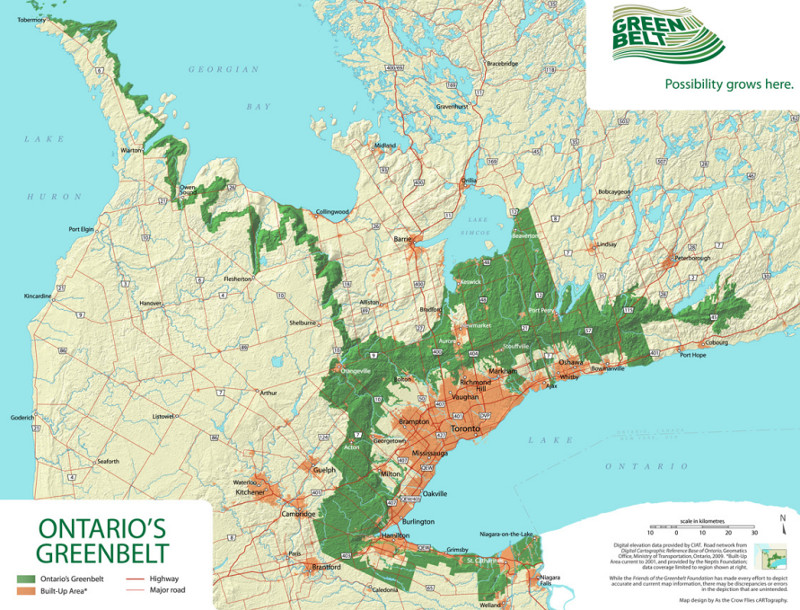 Nearly all Ontarians agree that the Greenbelt should continue to be protected and expanded, and that new urban growth should occur within already developed areas.

So much for Doug Ford as the "man of the people". Had Ford's plan to make this huge and irreversible gift to his rich homebuilder friends not been leaked, the Ontario public would not have found out about this backroom deal until after the election.

The PC Party went into immediate damage control mode after the video came out. Ford's apologists rushed out to defend Ford's plan on the ludicrous basis of "affordable housing" and to insist that they would magically produce more land to the Greenbelt to replace whatever they took out.

Locally, that job fell to Sam Oosterhoff, the PC MPP for Niagara West-Glanbrook, who fell into line:

To be clear: we believe in protecting the Greenbelt. Anything we look at to allow for much needed housing development, we will do in a measured and sustainable way: we will add the equivalent land to the Greenbelt. That means there will not be an inch less of protected land.

Of course, it is absurd to think that land can simply be swapped around on a like-for-like basis. The land in the Greenbelt is there because it is special: some of the world's best farming soil, irreplaceable wildlife preserves, and complex ecosystems that manage stormwater and prevent flooding.

But Ford said it and so his apologists had to defend it, leveraging their own credibility in the process. And yet, as it became increasingly clear that Ford's backroom deal was turning into a real liability, he flip-flopped and insisted that he won't touch the Greenbelt after all.

Naturally, Ford spun this as a positive thing, insisting, "The people have spoken." As if it was not already clear to anyone who cared that Ontarians overwhelmingly support the Greenbelt. As if the only reason he was talking about the Greenbelt was not because of his leaked secret promise to homebuilders.

Perhaps the most embarrassing example of this about-face comes courtesy of Vic Fedeli, the interim PC leader and previously-respectable politician who just a few months ago was eager to "root out the rot" in the party after the ouster of former leader Patrick Brown over multiple allegations of sexual impropriety.

On May 2, in a media scrum after Queestion Period, Fedeli abased himself for Ford, endlessly repeating the same embarrassing talking points and groveling for his leader's approval.

Following are his responses to questions from reporters about the backroom Greenbelt deal, and about Fedeli being "hung out to dry" when Ford suddenly reversed course after Fedeli had been forced to defend the leaked plan.

No, this is not a copy-and-paste error. He literally just repeated the same talking point over and over again. It feels like something right out of Idiocracy.

The endless repetition of simplistic slogans, the relentless deflection and whataboutism, and the grovelling praise for Dear Leader are unbecoming of the respectable politician that Fedeli used to be before he fell into the orbit of of Ontario's Dignity Wraith.

For as long as Doug Ford remains leader the PC Party, we can expect the sad, inexorable humiliation of formerly-respectable party members to continue.

Affordable housing where to get to any employment hub you have an 80-200 kilometre commute... smart.

I have to say, I don't understand the choice people within the spheres of these Dignity Wraiths make -- to stay, to enthusiastically support and lie for their boss. I fully understand making a choice of getting up and going to work every day, even if your job doesn't make you really happy, because you have to eat, but at some point wouldn't they just feel dirty?

I would love to have a one-on-one conversation with Sean Spicer or Sarah Huckabee Sanders or Paul Ryan.

I do not believe that Mr. Spicer, Miss Sanders or Mr. Ryan were ever in any danger of starving to death. They chose to support a man whose consistent pattern of behaviour meant that it was fairly obvious that they would have to "enthusiastically support and lie for their boss."

Inset the name Kathleen Wynne where the name Doug Ford exists & get the same conclusions.