If we want to stop reinforcing oppressive systems in the City of Hamilton that continually bar access to members of marginalized communities, we need to seriously rethink how our Municipal Government makes these kinds of decisions.

Why did I apply for the Hamilton Police Services Board?

Because I felt it was time. It was time for me as a sex positive, queer, feminist, labour activist to step up. I had served on boards, committees, unions, collectives, initiatives, coalitions and collaboratives in my community for decades. It was time to take all my years of experience and put it to use in a new arena - policing.

The relationship between my Two Spirit, Lesbian, Gay, Bisexual, Transgender, Queer, Intersex, Asexual, Plus (2SLGBTQIA+) Community and Police has always been strained. North America's modern-day gay liberation movement was born in response to acts of police violence on 2SLGBTQIA+ spaces and bodies (Ex: Stonewall Riots in New York and Bathhouse Raids in Toronto).

In my twenty-plus years as a queer activist, I had seen proactive attempts by Hamilton Police to repair their relationship with us, but with each move forward there would be a far more significant misstep that would further deteriorate trust.

In the late 1990s, the GLBT Police Task Force was formed in response to Project Rosebud, a sting operation by Hamilton Police that targeted men who were having sex with men on the grounds of the Royal Botanical Gardens.

Much like the men arrested in Toronto's infamous 1981 bathhouse raids, many of the men Hamilton Police arrested were not out of the closet. Their identities were revealed to the public after their arrests and their lives were destroyed.

The Task Force was made up of 2SLGBTQIA+ community members who would regularly meet with the Police Chief to discuss how to put in place policies and procedures that would improve the police's relationship with our community. Sadly, this group was dissolved shortly after Glenn De Caire became Chief and has not been resurrected since.

In 2004, when I was the Chair of the GLBT Advisory Committee for the City of Hamilton, the Police's Multi-Agency Task Force raided a local bathhouse. The outcry from the community was loud and swift.

Knowing this, I asked representatives from the Multi-Agency Task Force why they would invade and violate our space in such a violent way. The Deputy Chief who attended the meeting claimed that the Police did not understand the nature of the establishment that they had raided. Needless to say his comments were met with derisive laughter and outrage from the 2SLGBTQIA+ community members in attendance.

Only four years earlier, in 2000, I had been at a Women's Bathhouse event in Toronto that was raided by Police. I lived through the collective trauma of having your queer sexual space violated. I had experienced having my body, my queerness, my femaleness, and my sexuality dismissed, attacked, demeaned, and targeted by the police.

An Ontario provincial court judge ruled that police were wrong to raid the women's event. A class-action lawsuit and complaint to the Ontario Human Rights Commission resulted in a $350,000 settlement that included a formal apology in writing from the male officers involved in the raid. The decision also required the force to establish sensitivity training for all members regarding the 2SLGBTQIA+ community.

In 2003, when I was sat on the Board of Directors of Hamilton Pride Festival Inc., I was invited to join the Community Roundtable of Strengthening Hamilton's Community Initiative (SHCI). SHCI was formed in response to the hate fueled firebombing of Hamilton's Hindu Temple shortly after the tragic events of September 11, 2001 in the United States.

The 2SLGBTQIA+ community is one of the largest groups targeted by hate crimes and tends to experience the most violent offences. Horrific memories of a gay Hamilton business owner who was brutally beaten in 2004 still ripple through our 2SLGBTQIA+ community. If SHCI's goal was to end hate in the City of Hamilton they recognized that there needed to be queer representation around the table.

While sitting on SCHI's Community Roundtable, I heard from many diverse community leaders about the lack of representation on many seats of power and influence in the City of Hamilton. There was an extra-special push to ensure that the police force actually reflected the community it serves.

Many SHCI members shared negative experiences that stemmed from the police's lack of understanding and sensitivity in interacting with various marginalized communities. This created a lack of trust between these communities and police. There was also the added trauma of new immigrants who had fled oppressive regimes who had witnessed and experienced atrocities by authority figures first hand which added another complex and painful layer of distrust.

Police more than once told the community that their fears of a serial killer were unfounded. After a suspect was arrested and identified in January 2018, the Police Chief had the audacity to victim-blame the 2SLGBTQIA+ community by claiming that Police would have arrested the suspect sooner if the community had come forward and shared information earlier.

The systemic homophobia and racism that underlies the mishandling of the investigation of these murdered gay men led to a call for a Public Inquiry. After the perpetrator pleaded guilty to eight counts of first-degree murder in January 2019, the Toronto Police Services Board only agreed to expand an ongoing independent review on the matter.

In March 2017, members and allies of Hamilton's transgender and non-binary communities gave numerous delegations to City Council in support of a proposed Trans Protocol. This call to action and solidarity came out of an incident in which a transgender woman was denied access to a public washroom on city grounds by a Security Guard.

The Trans Protocol passed, but one of the groups who spoke out against it, the Christian Heritage Party (CHP), had an ongoing dispute with the City about their bus shelter ads. Their ads were removed after several citizens and organizations spoke out about how they promoted hate against the transgender community.

In October 2018, the CHP won their court case against the city for the removal of their bus shelter ads in 2016. In December 2018, the City decided to pay a fine to the CHP rather than to pursue an appeal of the ruling in the courts. What the entire matter painfully displayed was a core lack of understanding around gender diversity issues for City Council Members and City staff.

In November 2018, a community review of Hamilton sexual assault cases from 2010 to 2016 revealed that 70 percent of them were deemed "unfounded" and were not investigated by Police because they did not believe a crime occurred as reported.

Many women are raped but don't report it, because of fears of being re-victimized all over again by both law enforcement and judicial systems. It was demoralizing, to say the least, to discover that 70 percent of those who bravely came forward to Police to report being sexually assaulted had their claims dismissed before an investigation even began.

Now imagine being a queer, trans woman of colour who has been sexually assaulted and decides to go to the Police to report it. Think of the systemic and institutional barriers they would have to wrestle with while trying to work with an organization that has routinely stigmatized and attacked their identity and community.

In June 2018, Hamilton Pride was targeted by hate groups who had organized themselves to disrupt several local Pride Events throughout Southern Ontario. In June 2017, Hamilton Pride moved the location of their annual Rally and March, because a local hate group's regularly scheduled hate rally at City Hall was happening at the same location and time.

The fact that hate groups in Hamilton are being so brazen and out in the open should be repulsive to every Hamiltonian, not just those who are a part of a marginalized group. These hate groups spread violent messages that advocate genocide.

Along with my years of board experience come years of lived experience as a queer woman who has navigated and fought against systemic barriers because of my gender and sexual identities. This has included years of educating the public on 2SLGBTQIA+ cultural sensitivity and language. Years of equity training. Years of bringing a queer feminist lens to policies, constitutions, bylaws and processes. Years of bringing allies together who also want to end homophobia, transphobia, biphobia, misogyny, racism, classism, ableism and discrimination.

I felt all of these skills were something the newest Municipal Citizen Appointee to the Hamilton Police Services Board should be bringing to the table. So after applying and interviewing for the position and finding out that another white, male, heterosexual, cisgender, able-bodied and affluent member was added to the Board, I was bewildered.

If I had been the only person from a marginalized community who had submitted an application, I may have just let the whole thing go and assume that perhaps the preferred candidate brought some leadership experience that spoke more to Council.

But after I became aware that McMaster University Professor Ameil Joseph and Hamilton Gallery of Distinction Inductee Evelyn Myrie both applied and interviewed for the position too, I went from being bewildered to incensed.

Along with years of professional experience, Joseph and Myrie also brought years of lived experience as members of marginalized communities - marginalized communities who have also had a long and troubled history with Police. How could a City Council that claims that they want to use an equity and inclusion lens in making decisions come to such a tone-deaf conclusion?

This is why I went public with the selection process and spoke out against the decision of Council. This is why a group of us organized a silent sit-in at the HPSB meeting at City Hall. 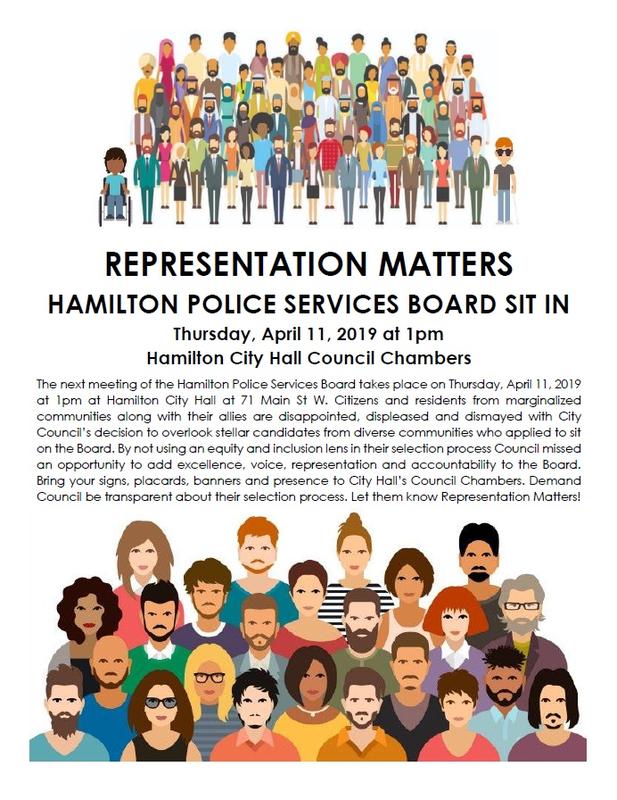 This is why we will be organizing delegations who will speak to City Council, the Hamilton Police Services Board and the Attorney General of Ontario.

Police Service Boards must be reflective of the communities they serve. To not have representation around this very important decision making table who can speak to the lived experiences of diverse communities does a disservice to the people whom the Police are sworn to protect and serve.

If we want to stop reinforcing oppressive systems in the City of Hamilton that continually bar access to members of marginalized communities, then we need to seriously rethink how our Municipal Government makes these kinds of decisions. Representation Matters.

The thin blue line needs all of Hamilton represented on the police board. Good luck Ms. Miklos.