The Sky is Not Falling Over Ontario's Debt

When you plot Ontario's debt on an inflation-adjusted, per-capita basis, the picture is not nearly as stark as you might expect.

What if the Liberals weren't nearly as disastrous for Ontario's deficits and debt as everyone seems to think?

Please bear with me for a few moments. I know we hear a lot about how much the debt grew under the Liberals' long 15-year government. Here's a chart of Ontario's nominal debt from 1995 to 2019: 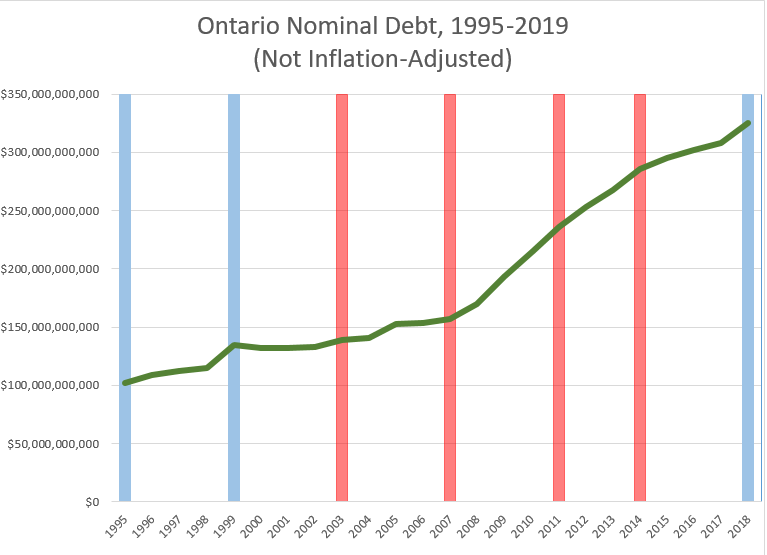 But we need to make sure we're comparing apples to apples. As I've argued in the past, we need to put the debt in context by looking at it on a per-capita basis.

After all, Ontario has big numbers in part because we're a big province, with 15 million residents making up 40 percent of the total population of Canada.

If we take the same Ontario debt numbers by year and plot them on a per-capita basis, the chart starts to look less frightening. 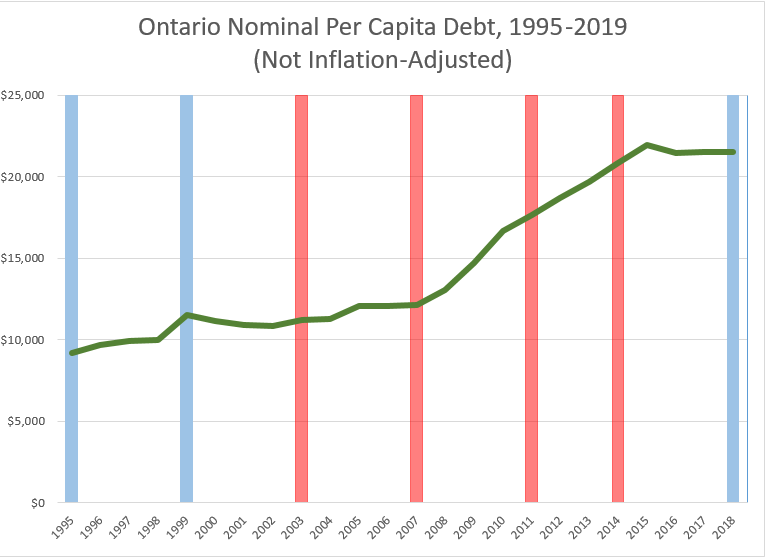 But we're looking over a period of 25 years, and a 1995 dollar is not worth the same as a 2019 dollar. So we also need to adjust the debt for inflation. Here is the same chart, inflation-adjusted so every amount is expressed in 2019 dollars: 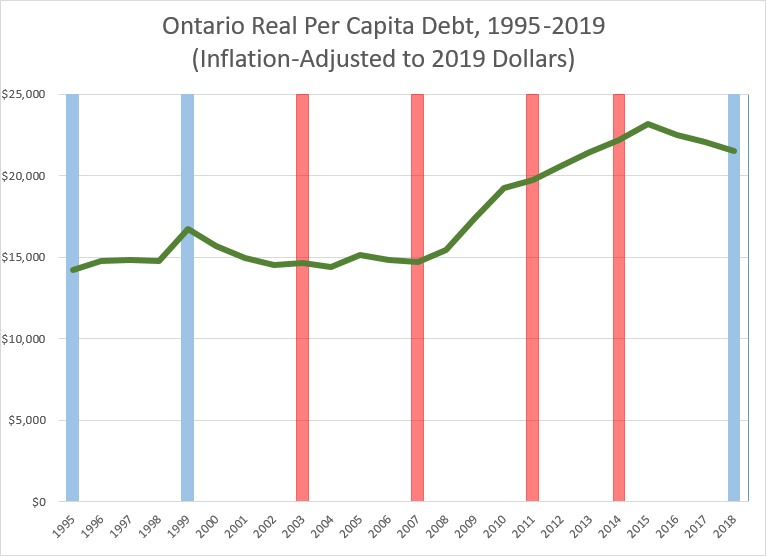 It turns out that when you plot Ontario's debt on an inflation-adjusted, per-capita basis, the picture is not nearly as stark as you might expect.

Wait, what? That can't possibly be correct! All we've heard over the past five years was about Wynne's "out of control spending". But it is correct. The Liberals spent the last three years of their long run bringing the real per-capita debt down.

I don't know why the Liberals didn't do a better job of highlighting this fact. Perhaps there was no point rowing against the prevailing narrative, or perhaps they thought it undercut Wynne's positioning as a compassionate left-wing Liberal.

Nevertheless, a reasonable person looking clearly at the facts can conclude that the Liberals ran up the debt when they had to - during the worst recession in almost a century - and began the hard job of bringing it down in the recovery.

At the same time, the Wynne Government finally began nudging OW/ODSP rates back toward a living minimum after two decades of cuts and stagnation. They also raised the minimum wage, launched a Basic Income pilot, established a carbon pricing cap and trade market, established universal pharmacare coverage for children up to age 24, provided free postsecondary tuition for low-income students, and invested heavily in the first new rapid transit expansion in a generation.

And remember: they did this while collecting the lowest per capita public revenue among Canadian provinces, leaving them very little room to maneouvre. So much for the right-wing narrative that Liberals aren't good with money. 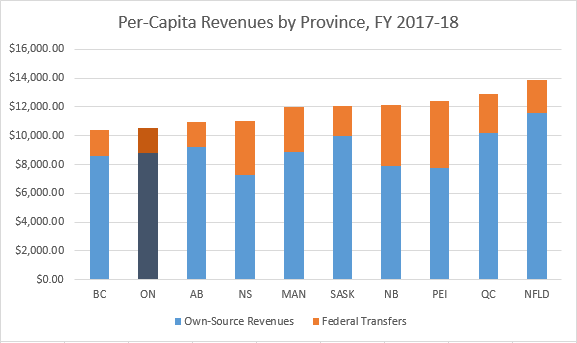 Meanwhile, the new Ford government has just managed the curious feat of significantly increasing the total budget while simultaneously imposing a broad swath of savage cuts to education, health care, housing and support for the most vulnerable residents.

Observe how the line moves over that course of years. Ask yourself if this is the trend of a government stuck in out-of-control spending and on the verge of bankruptcy.

Say what you want about the Liberals, but notwithstanding some high-profile gaffes and scandals, they traced a pathway through an eventful 15 years of global economics that a reasonable person should be able to understand, whether or not you agree with everything they did.

So the next time a Conservative runs around screaming that the sky is falling, remember that you are being lied to and don't believe the scaremongering.

For people who are too rushed, here's some helpful info:

TL;DR: Ontario's debt fell over the last few years, on a per-capita basis.

Now go read the article above!