Standing on the Line: On Being Gay and Lesbian in Amateur and Professional Sports

This film takes a fresh, often moving look at a variety of lesbian and gay athletes who are working to overcome the stereotypes and prejudices in order to improve life for all athletes.

Athletes are unique individuals. Devoted to becoming the best they can be, and often in more than one sport, they sacrifice more than most of us are willing. For these individuals, winning means everything. It may even include denying a significant part of themselves in order to be accepted by teammates, fans, management and to just be allowed to continue competing.

In his documentary, Standing on the Line, filmmaker Paul Entremont explores the taboos associated with being gay and lesbian in amateur and professional sports and the stress of deciding whether or not to affirm ones sexual identity.

This film takes a fresh, often moving look at a variety of lesbian and gay athletes who are working to overcome the stereotypes and prejudices in order to improve life for all athletes. 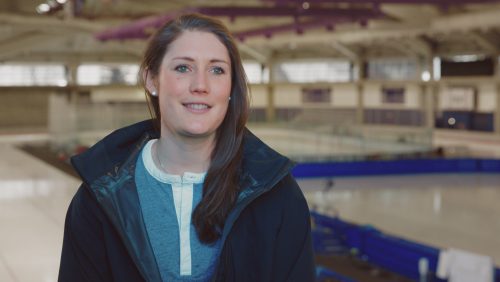 Olympic speed skater, Anastasia Bucsis, was the youngest member of Canada's team when she skated at the 2010 Winter Olympics in Vancouver. At 20 years of age she knew she was gay, but being a conservative Catholic girl from Calgary, Bucsis realized she had no gay friends, felt she couldn't tell anyone and fell into a depression.

Coming out was the best thing Bucsis could have done. Her parents had suspected for years, as had her best friend and room mate and all offered their support. In fact, coming out improved Bucsis' outlook and speed on the ice.

The story was a little different for David Testo, former soccer player with the Montreal Impact from 2007 to 2011. Testo was the first gay soccer player to publicly declare his homosexuality. Coming out ended Testo's career.

Testo was raised a Christian in Asheville, North Carolina. When he came out to his mother, her protective instincts kicked in and she denied his truth because of her fear of the South being racist and unaccepting of homosexuality.

Ironically, Testo knew from the age of ten that he was gay and that set him on the trajectory to become a fabulous soccer player in order to get acceptance. But things changed in the professional locker room when he came out. Some teammates were uncomfortable and Testo didn't want them thinking he was looking at them sexually. That didn't last long, because Testo didn't play professionally once he came out.

This led to a period of self-hatred, pain and self-abuse. It also led to the life-altering change that stopped Testo's self-destruction. Testo is happily thriving in Montreal, Quebec where he is a yoga instructor.

The first semi-professional hockey player to come out was goalie Brock McGillis from Sudbury, Ontario. Trying to hide his sexual orientation by drinking and womanizing, McGillis waited until he stopped playing to come out, but now he teaches young hockey players how to curb homophobic rhetoric and to be more inclusive and accepting of others.

Entremont traveled to Moncton, New Brunswick to visit the L'Odyssée High School where football Coach Serge Bourque believes, "Everyone should be able to play football and feel free to be themselves."

According to Entremont, "I presented my project at a number of school board meetings. Some were uncomfortable with the topic and turned me down. At long last, the Francophone Sud School District opened its doors to me, which is where I heard about L'Odyssée. The school had a number of great things going for it, including the Indigo project. Still, getting assistant coach Justin Boisvert, who trains the school's team, Les Olympians de Moncton, and former player Jean-Christophe Comeau to talk on camera wasn't without challenges. Before they came on board, I really had to stress the project's importance and scope. I also had to point out that the documentary would be around for a while."

Both Boisvert and Comeau are gay athletes. The Indigo project is a safe space for anyone with issues to have discussions. These issues are not limited to sexual orientation.

The documentary also explores the demands and expectations placed on athletes who do come out. At the 2014 Olympics in Sochi, Bucsis joined the fight against Russia's anti-gay law, but Bucsis was the only Canadian and only one of five athletes to take this stand. Ironically, the LGBTQ community had hoped for more from her.

Testo found it was the business side of hockey that didn't support him coming out. When he started his own business, hockey associations told him he could coach for free but he could not be a member of staff, nor could his business be associated with the teams or players.

Things really began to change when Brian Burke, former President of Hockey Operations for the Calgary Flames, became an unexpected gay rights activist. Burkes son, Brandon, came out and was forced off his team. Tragically, Brandon died in a car crash in 2000.

Burke wants society to teach young men to think about how others feel - something that is missing from the warrior, sexist, homophobic teachings of many male dominated sports.

Brandon's brother, Patrick, co-found the You Can Play Project to ensure athletes would be able to compete based on ability alone and not face discrimination for their sexual orientation.

Entremont takes viewers on a loving journey of healing that creates an inclusive environment for all young athletes simply hoping to be remembered for their physical and mental skills.

This one hour, 20 minute documentary would make the perfect film to leave when physical education, civics, law, family studies or social justice teachers need to leave a meaningful assignment for a supply teacher. Spread over two periods with time for a written reflection after 40 and 80 minutes this is a wonderful way to open up the dialogue on one of those uncomfortable, but vital discussions.