All this post-election talk about Alberta separation certainly provides lots of grist for the mill, but I'd like to resist the urge to dig into conservative fragility and libertarian tears for a moment and reflect instead on this idea that Alberta doesn't need Canada.

Despite surface appearances, Alberta's economy is moribund, tied entirely and hopelessly to high-cost, low-value resource extraction of an inferior product with extreme global price volatility that needs to be refined considerably just to become crude oil. 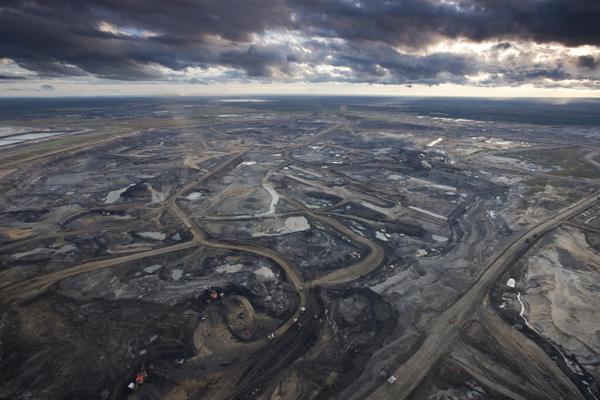 The political culture is monolithic and effectively controlled by a handful of fossil fuel companies whose only goal is squeezing revenue out of the province for as long as possible, which is why Alberta has among the lowest oil industry royalty rates in the industrialized world. While Norway leverages their oil revenue into a trillion dollar sovereign wealth fund, Alberta trades its oil to avoid a provincial sales tax.

It would be bad enough if Alberta was 'merely' trapped by the Resource Curse, with a de facto one-party political system, sluggish economic growth, staggering environmental degradation and widespread public resentment and alienation.

But global warming is a real thing, it is already happening observably and measurably around the world, and it is getting worse. In fact, the rate of warming is increasing and we are hurtling toward tipping points where it becomes uncontrollable.

Yet Alberta's political culture is so dysfunctional that the first thing its governing party did, after closing the party schism that had caused it to lose the previous election and reclaiming power, was to cancel the extremely modest carbon price the previous government had implemented to facilitate a 'social licence' to keep extracting oil.

And they eliminated the price on carbon as smoke from out-of-control wildfires, made worse and more frequent by global warming, literally blew into town and canceled their celebratory presser. You couldn't write this in a TV show.

Meanwhile, Alberta has absolutely no inkling of a plan to begin to transition away from its one-trick industry of pumping steam into greasy sand, catching the bitumen that oozes out and selling it (often at a loss) to refiners. In fact, echoing a similar policy of maximum wreckage as Doug Ford in Ontario, one of Alberta Premier Jason Kenney's first acts was to kill off a renewable energy program in order to burn the bridge to a diversified future.

This crisis is not going away, and escaping the resource curse will not be easy. We are in for troubling times and Alberta's deranged politics makes it exponentially more difficult even to name the source of the crisis, let alone address it meaningfully.

Canada needs Alberta to get with the program or we have no chance of meeting our historic obligation to decarbonize our economy. At the same time, Alberta needs Canada to support what will be an expensive, disruptive and even traumatic transition away from an unsustainable business that has seeped into the province's core identity.

But we can't build a common purpose as long as Albertans - and conservatives generally - continue to categorically deny reality.

We're going to have to have some difficult, uncomfortable conversations in the coming weeks, months and years, and we have no time to waste. We are fast approaching the point at which humans effectively lose control over the concentration of greenhouse gases in our atmosphere.

I've been thinking more and more lately about the similarities between Alberta and Hamilton through its decades of dependence on steel. Steel price fluctuations had huge impacts on the city over the years before the industry finally shrunk for good. It took years for the city to adapt, but it's finally coming around with a more diversified economy. The result is a city that approaching the greatness of those times when steel demand was high but with a much lower risk of the busts when steel prices tumbled. Alberta feels a lot like Hamilton in the 80s, and the fact that they're not looking for alternatives means they stand a good chance of going through exactly what Hamilton had to endure for 25 years. The question then is whether or not the province has the right factors in play to actually rebound like Hamilton has.

Trudeau has consistently supported building the Trans Mountain Pipeline despite his lofty talk about the climate emergency. Not that it has endeared him to Albertans one bit.

Better get on that. Cortez says we only have 12 years. Probably 11 now.

I'm tempted to Rs;dr this post, but let's play ball.

Like most humans, AOC occasionally engages in hyperbole as part of her rhetoric. Normal people understand this, while hyper-partisan Republican operatives pretend not to understand what she's doing so they can attack her.

What Sanders, Gore et al. were warning about in the 1980s and 1990s was that if we did not act meangingfully to reduce carbon emissions, we would not be able to prevent global warming. And they were correct: the average global temperature is already around 1 degree Celsius warmer than it was at the start of the industrial era, and half the increase has occurred in the past 30 years.

You can tell RedState is being disingenuous here when they cite Katharine Hayhoe in defence of their thesis that we need to calm down, since Hayhoe is actually saying, "Every action matters. Every bit of warming matters. Every year matters. Every choice matters." Hayhoe doesn't like the 10-12 year deadline because she worries that it will suggest a lack of urgency, not an excess of it.

As we can see, Alberta's economy outpaced Canada's in both periods. Oddly enough, we also see that Alberta's economy grew much slower in the second period, even with rising oil prices. I couldn't find Alberta oil production going back to 2000, so I used Canada's as a proxy (https://tradingeconomics.com/canada/crude-oil-production). Between 1993-2000, Canada's oil production output grew by 3.2%/yr. Between 2000-2010, it grew about the same.

It's obvious Alberta, whatever people say, doesn't require a booming oil industry to grow. That said, Alberta did benefit from the right economic environment between 1993-2000. Let's compare some metrics in the two periods...

Bottom line, Albverta doesn't require an ever expanding oil sector to grow, but it does benefit from the old fashioned economic policy of sound money and limited govt.