Jason is all over the place. Literally.

(This article has been updated.)

James Street is getting so vibrant that even the Chamber of Commerce is beginning to take notice. In a recent Hamilton Spectator article, John Dolbec, the CoC CEO (that's a lot of letters), acknowledged that the rebound may be due to the two-way traffic conversion.

Hamilton Chamber of Commerce CEO John Dolbec says James North has begun a quiet but significant renaissance, driven in part by traffic flow, but also by a younger crowd less concerned about the reputation of the James Street strip.

"It seems to have started about the same time the city made James North into a two-way street" in 2002.

"I ... was always skeptical about that, but a lot of merchants in the area swear by it."

Now James North, with its strong Portuguese and Italian presence, is undergoing a rebirth.

"It seems to be acquiring a kind of status as a go-to strip, attracting people from different parts of the city and even from out of town," Dolbec said.

"It's attracted a lot of artists ... and any place that attracts those bohemian types, there seems to be a certain hospitality traffic that follows that and boosts the local retail traffic at the same time."

Finally, the old Tivoli theatre, partially demolished after years of neglect, is going to be the permanent home of the ProArte Danza ballet company.

According to Councillor Bob Bratina, the new owners of the Tivoli will rebuild the previous construction that was demolished behind a glass entranceway. He writes, "Thee is a possibility of other properties being folded into the project, and those discussions are on-going, so that may impact the final design as well."

It sounds like it will be quite an artistic hub, right on James St. Here’s hoping they can raise their money in the next couple of years.

Well, they did say health care is a growth industry. Great news out of Hamilton General Hospital with their announcement of three new planned buildings (PDF link) north of the hospital. 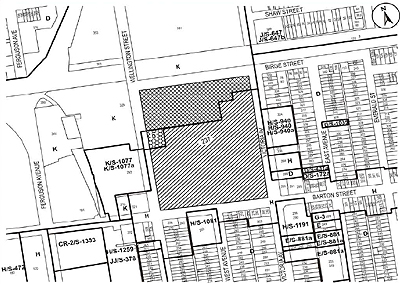 I like how the General Hospital is planning on building these buildings with the streetwall intact, instead of plopping up some boxy, suburban style things set way back from the sidewalk. Their new buildings all face the street.

This will be great for that area along with the new Ferguson streetscaping, mixed use development planned for Barton and Ferguson and adaptive reuse of the old barn-type building on the north side of Barton that is in the planning stage.

How funny: part of this plan is for a brain-injury rehab centre...I'm calling it good news, unlike, er, some other citizens of our city.

Barton Street could really be amazing. I think a cool mix of renovated urban Victorians, old European charmers, funky new lofts, condos and average rentals would create a vibrant mix of people. The entire plot of land at the southeast corner of Ferugson and Barton is planned as a mixed use commercial/residential/retail district.

I'm convinced that as the city loosens zoning restrictions (they are finally starting to do that, according to yesterday's CATCH news release) and focuses more on infill, we'll see downtown and Barton come back to life.

Ferguson will be a nice cycling connection and James North is a good commercial connection from the downtown, not to mention the harbour nearby and future transit corridors. Barton has a stunning streetwall and great stock of buildings. It's only a matter of time.

The mighty Paul Wilson recently reported that the Corktown Tavern on Young St. has been renovated. Also, a plan is in the works to bring back Irish street signs in Corktown Neighbourhood, complete with shamrocks. [Maybe we can even convince Hamiltonians to start pronouncing "Connaught" properly - Ed.] I'm not sure where that stands right now.

No Longer the Pitts

We can really learn a lot from Pittsburgh. They’ve turned the city around and you’ll notice how they always link tech, green building design, fortune 500, quality of life, environment, arts, entertainment, sports, outdoor activities, and history. We call it the "triple bottom line", but they actually do it.

Check the city out. The place looks beautiful, with a skyline to be proud of.

Portland's MAX light rail system just turned 20. From its humble beginnings in 1986, the system has quintupled its ridership, and MAX now carries a quarter of all commuters on the main east-west corridors in Portland. $3.8 billion in new investments have flowed into the corridors around the transit line.

When MAX was built, people came to ride. Developers and entrepreneurs understood that people are good for business, so they came too. Virtually every parcel of vacant land next to the MAX Blue Line has changed hands, been developed, or had development plans announced.

Jobs have been created, urban zones have bustled, and mixed residential and commercial projects such as The Round in Beaverton and Orenco Station in Hillsboro have offered a sophisticated alternative to sprawl.

Hamilton is 20 years behind and moving slowly, but it's never too late to start.

Chew on this: just in time for the municipal election, Aerotropolis revs up (PDF link). Fancy timing, eh?

In other news, it sounds like they’re making great progress with the Lister Block negotiations. The mayor said today that their final solution will rest somewhere between "complete demolition and complete restoration."

At the same time, emboldened by whay he sees as a likely favourable decision by the committee, Bob Bratina is demanding that LIUNA bring Lister into conformance with the city's property standards by-law (PDF link). According to CATCH, Bratina has formally requested city staff to inspect the property "and to immediately serve the owners with a demand to comply."

Just what Ontario needs: a highway between Cambridge and Brantford. Talk about Places to Sprawl. That's $2.2 million we won't be spending on intensification.

Hey, there's always hope that they'll go with the transitway instead.

Update - The paragraph concerning a proposed highway between Cambridge and Brantford originally included a link to a breaking news story on the Hamilton Spectator website, but apparently the Spec does not preserve these articles. -Ed.