Engaged Citizens of Burlington (ECoB) co-chair Roland Tanner gives his impression of the OP Review options and the engagement the city is undertaking.

Burlington Residents attending either of the “Citizen Action Labs” on Wednesday, October 23 could be forgiven if they felt some deja vu. As has so often been the case in recent years, there was a feeling of anger from some residents in the room which city staff present were ill-equipped to control. Even the professional facilitator employed by the city was unable to keep the two-and-a-half hour meeting on track.

What was meant to be the main part of the evening – facilitated table discussion of the options – was reduced to a semi-chaotic 40 minutes with many attendees not bothering to participate in the exercise.

From what I saw, a large number of residents who did take part showed their equal dislike of both options. Others felt they simply weren’t capable of giving informed comment given the lack of time to properly understand what was on offer.

A quick glance at the two images provided in the city workbook illustrates the dilemma. 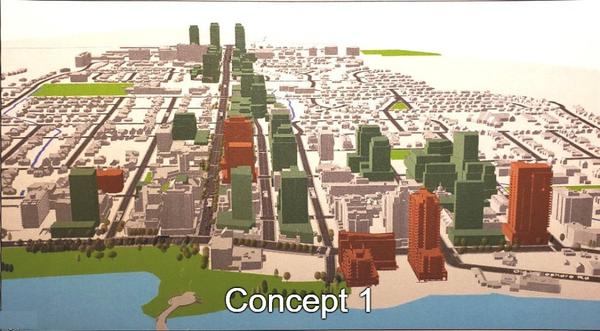 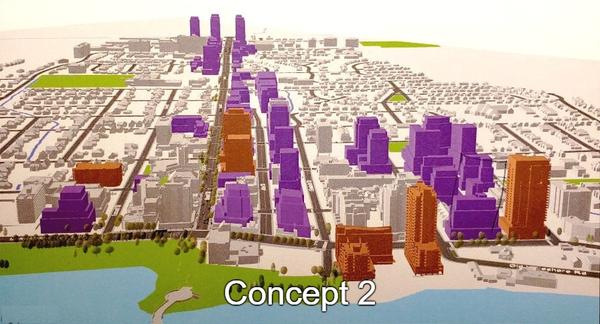 Note: these images show downtown Urban Growth Centre with Brant, John and Elizabeth Streets at the centre, with Brant Street reaching as far as Fairview. Buildings in brown are already under construction or approved. They will be built. Buildings in green and purple are proposed ‘maximum possible building envelope’ for each location where development is possible in the Urban Growth Centre. This does not mean anything will be built in those locations, or that it will look anything like the coloured blocks.

The two images, to any normal resident, seem hardly to be distinguishable. There are major differences, but they will not be obvious to the average resident. What immediately leaps out to most residents is a picture of a downtown full of tall buildings. Isn’t this what citizens voted last year to stop? Why does the revised OP look like it will be more of the same?

The most important thing for residents to know is that if they expect the revised Official Plan to be significantly different from the Grow Bold vision, they are likely to be disappointed.

The choices on offer on Wednesday can be summed up as Grow Bold 2.0, with narrow towers on three-storey pedestals with large setbacks and transitions; or somewhat shorter buildings (up to 11 storeys), which cover the entire lot, with much smaller setbacks. 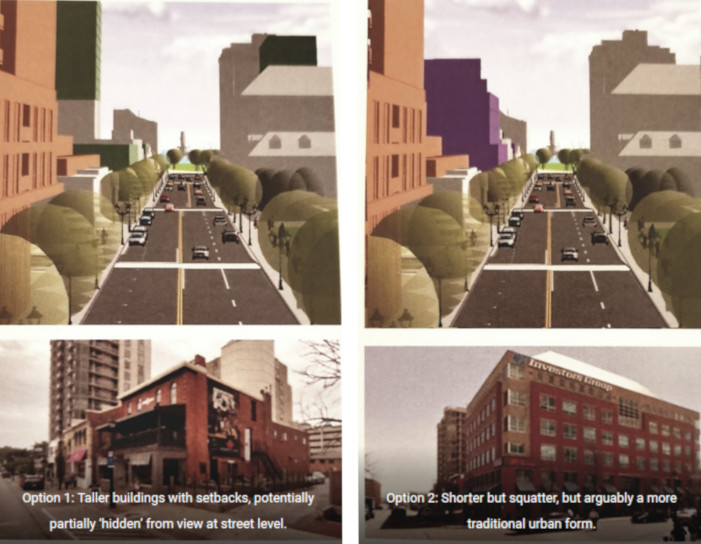 Option one takes the bulk of new buildings further away from Brant Street, but as a result they are taller with ‘narrow’ towers (visible in green).

Option two provides shorter buildings, such as the city building opposite the Queen’s Head, or the purple block in the image, but they will be bulkier.

The tendency in modern urban planning is to go with an ‘Option One’ approach. This is seen as offering better scale at street level, and as helping to ‘hide’ tall buildings. It is also suggested by the city that this will allow older buildings to be kept. In practice, I doubt that developers will ever want to keep existing heritage buildings, as it requires a major increase in cost to work around or temporarily relocate buildings. 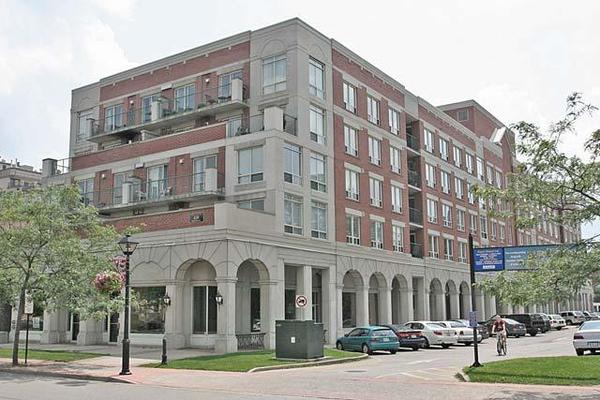 The Village Square Condos, for example, would not be seen as good planning by many planning professionals, and would not be favoured under ‘Option 1’. But with arcaded stores and red brick facade it has become a successful public element of the new Elgin Promenade.

The perhaps less fashionable approach with urban planners is to allow buildings which are shorter but bulkier. However, it must be noted that buildings like the city-owned offices at Brant and Ontario shown above, or the condominium building behind the Village Square, never created the widespread public anger that taller buildings do.

Shorter/mid-rise buildings that go lot line to lot line have been successfully employed across cities for hundreds, if not thousands, of years. They are cheaper for the developers to build, and potentially allow development by smaller companies aimed at a more varied market.

The building which prompted ECoB’s creation in 2017, the Carriage Gate development underway now at 421 Brant Street, began life as a proposal for a mid-rise building in the ‘shorter, full lot coverage’ mould.

It was the city that requested a taller building with a tower and setbacks, which was eventually settled at 24 storeys. By doing so, they unleashed a wave of public resistance and a wave of applications for similar buildings across downtown.

Taller buildings are very expensive to build, which increases the pressure on the developer to build as big as possible, and to build for wealthier buyers. It is the only way for them to make a reasonable profit. Tall buildings are harder to maintain long-term and more restricted in materials.

If Option 1 and Option 2 are what is on offer, I believe in most locations downtown Option 2 would be the more sensible route long-term.

These are the only options the city planners can give to residents, because anything else would be not even be slightly defensible on appeal to the Land Planning Appeal Tribunal (LPAT, formerly the Ontario Municipal Board). As professionals, they simply cannot create draft plans that ‘ignore the rules’ set out by the province.

Given recent proposals, and the context of a provincial government that aggressively supports developers, I believe what the planners are suggesting is largely unenforceable too, but it is something closer to realistic.

This is absolutely not to suggest, as the previous council did, that the city should give up and accept whatever happens. It is to suggest that we can’t look to the Official Plan to solve our problems.

By focusing on the Official Plan at the last election, the public received the impression from candidates, deliberately or not, that a significantly different OP was possible. It is not. It has to abide by what the province insists should happen in Urban Growth Centres.

That’s why, when I ran for council last year, I deliberately did not focus on the OP (you can check my comments at the Ward 2 debate if you don’t believe me), because I believed it was a sideshow to the real problem. The best OP in the world will not ‘save’ downtown in the eyes of most residents.

Council should be doing everything in its power to pursue that objective. It won’t be easy, but it is technically possible. If the new council wants to deliver on the high expectations of the people who voted for it, that’s what it must address.

The UGC was located downtown by the province on the advice of the Cam Jackson council with no consultation or discussion whatsoever. It shouldn’t have happened, and the challenge now is to try to undo what was done so carelessly.

While it is in place, developers will always have the upper hand in demanding very large buildings, and the city will at its most successful only be able to argue for moderately smaller buildings.

Engagement on the New OP is Better but Still Flawed

I want to start by saying that OP Review team and the city have made significant efforts to do engagement better. However, they have been constrained by time and budget from doing the kind of engagement exercise which should have happened back in 2017.

ECoB recognises those efforts and has repeatedly and clearly stated that it welcomes them. But this is still not engagement done right.

When you see meetings ‘get out of hand’ as Wednesday night’s meeting did, it is because the format is wrong, or the public expectations of what they’re there to do are wrong, or both.

Given the context of the last three years and the expectations that have built up, partly because of the rhetoric used at the election which focused heavily on the Grow Bold OP, plus the egregious development proposals that have been submitted to the city this year, the public are going to come to any meeting primed for conflict.

If one then spends the first half hour explaining all the things that cannot be talked about, you are – unintentionally – insulting the people who turned up thinking they were there to state their opinions and be heard.

The Purpose of Engagement is to Obtain Useful Data

Once again, I emphasize that the OP Review team has made significant efforts to get away from the ‘town hall meeting’ style of engagement, and to ask questions which are actually credible for the public to answer.

However ECoB recommended that the city concentrate on obtaining data that is both statistically relevant and representative of the entire community. You can’t do that by calling people into a room (or a park) and seeing who turns up. Firstly, the people who attend are self-selected and will skew towards certain demographics – the older, the wealthier and the angrier. A representative sample of residents are never heard.

Secondly, you are asking the people who turn up to provide detailed insight on a planning document they are completely incapable of commenting on during the course of an hour or two. Any data which is collected is useless, even in the unlikely event anybody says something useful. No serious researcher would touch whatever data the city collected on Wednesday night.

A better course would have been to spend a small budget sending out questionnaires to a randomized but representative section of the public, which also collected demographic data so the city could compare responses from different age groups, genders, income groups, ethnicities. Or what about one-on-one interviews with planners and a smaller number of residents where they work together on understanding and commenting on proposals?

A group of representative residents might have been invited to take part in detailed education on the full planning context, and then asked to give a more educated and detailed response. That would have created data and comment that was actually useful to the city.

The purpose of engagement is to find out what the residents prefer. The mistake the city repeatedly makes is in thinking if they contact 10,000 people that’s ‘good engagement’ regardless of what’s said. It’s not. Quality data from a hundred people is much better than useless data from 10,000. Quality data from 1,000 could easily have been obtained with a little time and investment.

Ultimately, however, the expectation that a fundamentally different Official Plan is possible is not one that the city can deliver until and unless it tackles the Urban Growth Centre.

This article was first published on the Engaged Citizens of Burlington website.

Roland Tanner lives and works in Burlington, where he has been a community volunteer for municipal and provincial causes for over a decade. You can visit his website.