Light Rail an Important Step Toward Restoring a Sacrifice Zone

The B-Line LRT is not an end in itself but the beginning of a larger public infrastructure project connecting all of Hamilton with a transit network.

The Hamilton I live in is a [sacrifice zone](https://en.wikipedia.org/wiki/Sacrifice_zone). It is cleaved, not once but twice, with five fast lanes of roaring traffic. This open wound cuts from The Delta to Westdale and demands a price from everyone who lives near it, in terms of health, quality of life and safety.

Living near busy arterial roads is associated with higher rates of respiratory disease, as well as greater incidences of some cancers. The noise pollution wears just as badly on mental and cardiovascular health.

The lower city also carries a toxic air burden, regarded as the worst in Ontario. This is a consequence of both proximity to industry and transportation. Hamilton's official truck route includes Cannon Street, cutting through densely populated urban communities complete with schools, cross-walks, and commuters of every age and ability. 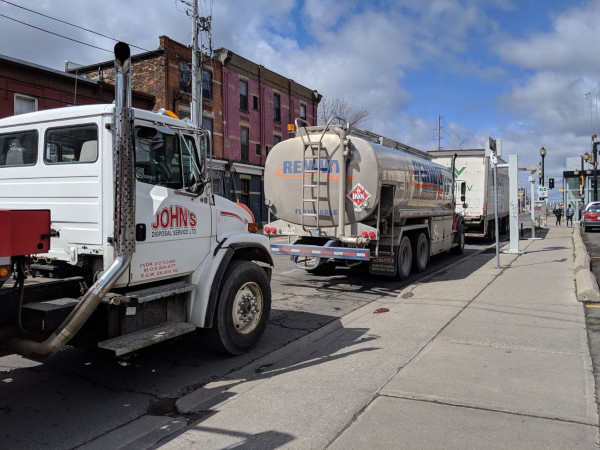 Hamilton sacrificed the lower city to the progress of industry and commuting a very long time ago. To point out that Hamilton's lower city is disproportionately impacted by disease and emergency room visits can't possibly shock anyone, though it's still valuable to map it.

In the space of four weeks between November and December, two women were struck and killed by drivers who fled the scene in separate incidents (there have been arrests and charges in both incidents). If these were shootings, or stabbings, or involved youth, social media would be having alternating fits of shaming and demanding vengeance while news media would offer careful analysis of how far along we are to hell in a hand basket.

Since they were just pedestrians going about their business, their loss to dependents, family, community, employers, and themselves is somehow more acceptable. Death by automobile is Hamilton's version of thoughts and prayers: we accept the carnage as a cost of getting from A to B in a first-world, industrial city.

Public Transit is a Public Good

The use of property tax dollars that we all pay, either directly or through rents, to fund and prioritize private transportation is an unparalleled misallocation of scarce public dollars and a stunning waste of non-renewable resources.

In our province, a commuter may cross into several municipalities on a routine or daily basis, making use of public roads while never contributing to their upkeep. We provide a provincial buffet of roads to the private owner of the automobile who consumes the most resources.

But from the users of public transit who demand the least of our public rights-of-way, in every jurisdiction they access and cross, we demand a toll. To not recognize the inherent class bias is to miss the train.

In Hamilton, there has been no significant investment in public transportation in a generation. The B-Line, the busiest transit route in the city and the route of the long-planned, now-cancelled light rail transit (LRT) project, started as an express route that was to become part of a network of frequent, rapid transit across the entire city called BLAST. 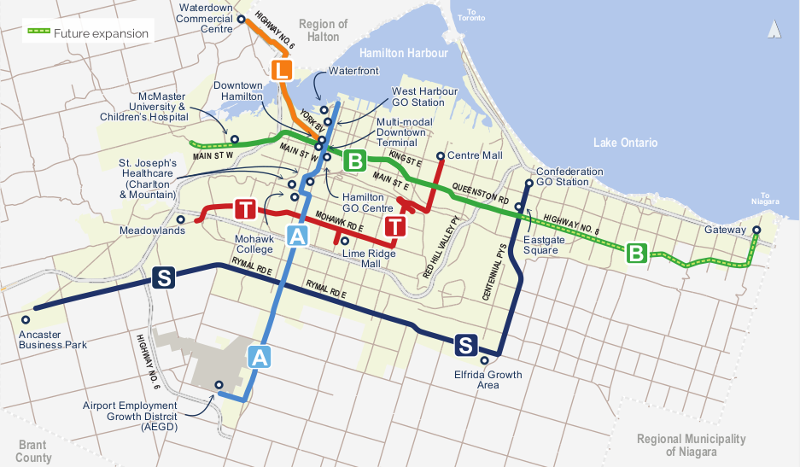 The B-Line, the first route in the BLAST network, was first launched in 1986, 33 years ago. In 1986, "Walk Like An Egyptian" played on Boomboxes and Walkmans, mobile phones weighed several pounds, and almost no one had heard of the Internet.

The B-Line LRT is not an end in itself but the beginning of a larger public infrastructure project connecting all of Hamilton with a transit network that was stunted as an express bus back when mullets were in fashion.

LRT is an Opportunity

LRT will not solve the economic and social issues of the housing crisis, marginalization, and racism. Neither will forgoing the LRT.

What LRT will do is put better quality and more affordable food within reach of more people. It will connect housing with employment. It will provide more convenient access to public services, health care, and shopping. LRT will provide work building and then operating and maintaining it.

LRT will also slow automobile traffic, at least along the transit corridor, making our roads and communities safer and more hospitable to everyone.

The very important questions of social justice and equity must still be addressed. However, frequent, rapid mass transit will benefit not the elites, but the people who use public transit the most: women, immigrants and youth.

LRT is not and never was a silver bullet. It is and remains an opportunity.

Editor's Note: Hamilton Light Rail has launched a new campaign calling on Hamiltonians to send Premier Ford a message calling in him to fix Minister Mulroney's mistake and get the Hamilton LRT back on track. Please join the call to action and make your voice heard.