Low Hospitalization Numbers Today Are No Cause for Complacency

As long as each person who gets COVID-19 in Ontario infects on average more than one other person, that means we are on track for runaway exponential growth in cases again.

I am seeing a lot of comments from people who are looking at Ontario's Covid-19 numbers and feeling confident that we are not heading for trouble. If you are one of these people, I would like to take this opportunity to disavow you of your confidence.

The effective reproduction number, or Rt, is the average number of additional people an infected person goes on to infect. As long as it remains at or below 1.0, the virus remains under control. If it increases above 1.0 and remains there, virus transmission goes into exponential growth.

In Ontario, Rt was at or below 1.0 from mid-April until early August. Since then, it has been higher then 1.0 and is actually increasing steadily toward 1.5. This is bad news for people who don't want Covid-19 infections to spiral out of control. 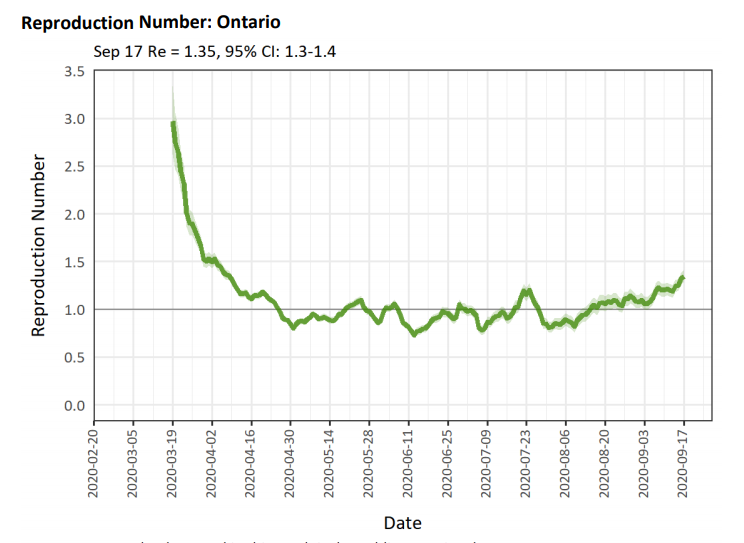 If we look at new daily cases, they ranged between 100-200 a day throughout July, August and early September. But within the past couple of weeks, the number of daily cases has been increasing rapidly and hit nearly 500 on Tuesday, September 22. 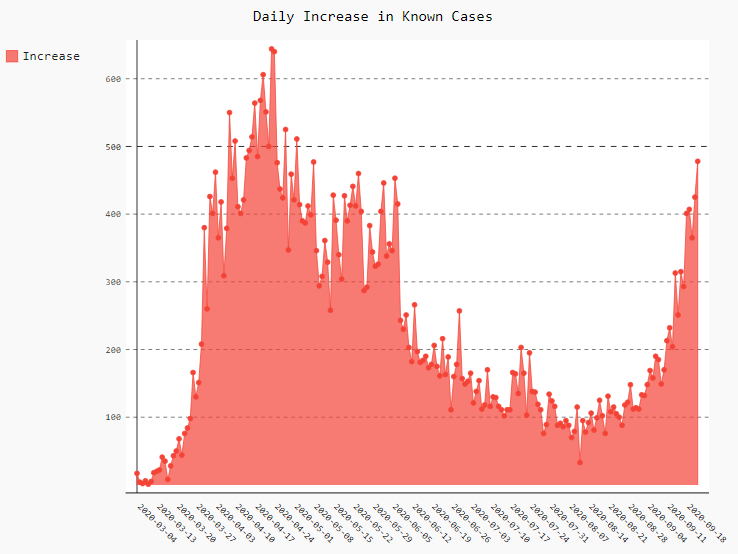 Many people have been carefully watching the hospitalization numbers and taking comfort from the fact that hospitalizations have not significantly taken off as well. 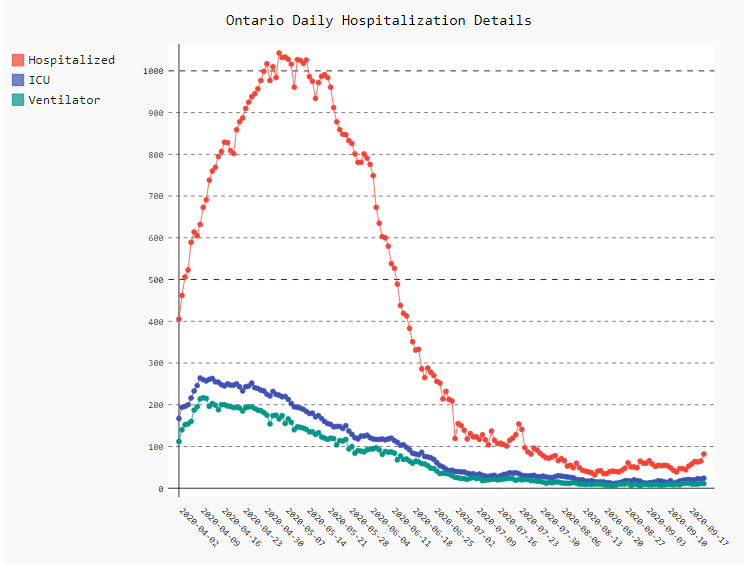 Some people are arguing that the number of cases and the number of hospitalizations have become decoupled, meaning we don't need to worry so much about the growth in cases. (I've even seen people suggest that we should be calling this a "casedemic" rather than a pandemic.)

There is likely some truth to some or all of these arguments. What I hope to persuade you is that it ultimately doesn't really matter.

Exponential growth, left unchecked, will ultimately swamp these other factors.

Our human brains are not good at thinking intuitively about exponential functions. For the classic illustration of this, imagine a petri dish with bacteria that double in number each day. If the petri dish is full on day 30, on which day is the dish half-full?

The answer, of course, is Day 29, which makes perfect sense when you think about it: if the bacteria double each day, that means they have to double from half-full to full between Day 29 and Day 30. 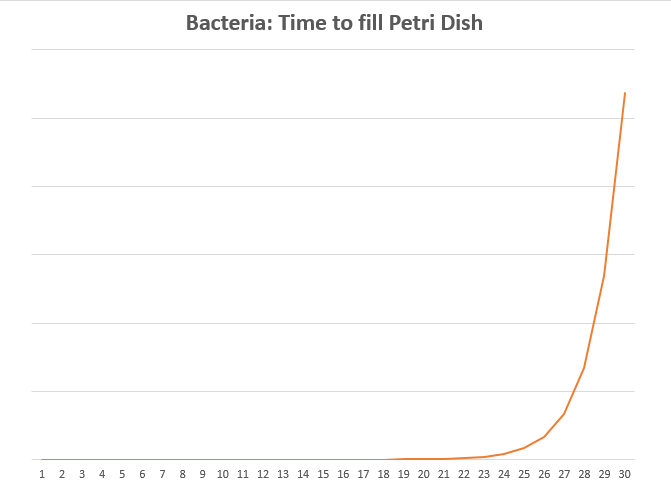 Exponential growth of bacteria in a petri dish

But when you're reasoning forward from day one, when the numbers are still tiny, it's hard to appreciate just how suddenly those tiny numbers can snowball into gigantic numbers.

Our intuitive reasoning apparatus is further impaired by the fact that our observations about Covid-19 all come with a delay. The time lag from exposure to onset of symptoms averages five days. For people who need to be hospitalized, the time lag from symptoms to hospitalization averages another ten days or so.

And for people who die, the time lag from hospitalization to death is a further two to three weeks. And of course it takes time for these events to be recorded and published.

So no, we should definitely not expect to see the dramatic uptick in cases over the past few weeks fully reflected in either the hospitalization or fatality numbers. But we will see it. Hospitalization actually has begun to tick upwards this week. The numbers are still modest but remember that exponential growth curves are small until they aren't.

In France, there were around 400 people in Intensive Care Units (ICU) on September 4. By September 17, the ICU number doubled to 803 after increasing for 20 consecutive days.

Meanwhile, Israel has re-imposed lockdown and the military is opening field hospitals to manage the overflow in their swamped medical system.

Exponential growth curves are small until they aren't.

And, of course, the fatality numbers will eventually begin to tick up again as well. I had a frustrating debate with some people in midsummer who were arguing that case numbers were exploding in the United States but fatalities were not increasing as well, so therefore it wasn't a big deal.

Using a back-of-the-envelope calculation, I suggested that fatalities would increase until they exceeded 1,000 a day within 3-4 weeks, and sadly I was proven correct more or less right on schedule.

So this is absolutely no time for Ontarians to get complacent. It's no time to assume we can afford to relax when it comes to controlling transmission of this very real, very infectious, very deadly virus.

If we do not get our Rt back below 1.0, it will only be a matter of time until our hospitals are overwhelmed by exploding case numbers.

Fundamentally, nothing about the virus and its public health threat has changed since the emergency measures our government started implementing in late March, except that we now understand even more clearly what we need to do to keep this thing under control.

That understanding needs to drive our individual and collective actions to avoid infecting each other:

Notwithstanding its shambolic back-to-school 'plan', the Ontario Government is now, perhaps belatedly, once again recognizing that it has an indispensable role to play in setting the right regulatory and communications context to drive behaviour in the direction of health and safety.

We have to acknowledge that the government's response will likely entail rolling back some of the staged re-opening plan. The good news is that we now have more nuanced levers to pull than we had in March, when the unfolding emergency nature of a brand-new disease and the missed window of a truly preventive strategy entailed a dramatic shutdown of all non-essential services.

If we want to avoid another lockdown, we need to make sure the measures we take are effective and adequate to reduce the effective reproduction numer below 1.0 again.

An article pubished in Libre Mercado on August 18 argued against getting too worried about rising COVID-19 cases in Madrid:

The data show an increase in cases, but this does not mean at all that the situation observed in August is comparable to that of last March.

In the first place, it is important to contrast the number of cases with hospitalizations, since this allows us to understand to what extent the spread of the virus is generating a delicate situation or, on the contrary, a manageable scenario. In this sense, the data that Libre Mercado has presented show that only 3-4 percent of the positives are being hospitalized and that only 0.2 percent have required intensive care.

What a difference a month can make! An article published in El Diario on September 24 shows just how quickly the situation has deteriorated:

The statistics of the City of Madrid indicate today that the Intensive Care Units (ICU) are already saturated. Although the Deputy Minister of Public Health and Covid strategy, Antonio Zapatero, reported this Wednesday that 47 percent of intensive care beds are occupied by patients with coronavirus, the reality is that ICU structural beds, which are managed by specialists in intensive medicine, are already full in the vast majority of Madrid hospitals filled with patients with the disease. To cope with this healthcare pressure, Madrid hospitals have to add new beds for serious COVID-19 patients every day.

(H/T to Antonio Paez for sharing these articles.)

And dont forget to wear a mask with your lover during sex as well - sound advice from Dr. Tam . . . https://www.theglobeandmail.com/canada/a...

Sexual health is an important part of our overall health. However, sex can be complicated in the time of COVID-19, especially for those without an intimate partner in their household or whose sexual partner is at higher risk for COVID-19. Like other activities during COVID-19 that involve physical closeness, there are some things you can do to minimize the risk of getting infected and spreading the virus.

The lowest risk sexual activity during COVID-19 involves yourself alone. If you choose to engage in an in-person sexual encounter with someone outside of your household or close contacts bubble, there are some steps you can take to reduce your risk. [emphasis added]

Remember when I said we shouldn't be complacent about low hospital numbers because they are a lagging indicator of rising case counts? And here we are today: 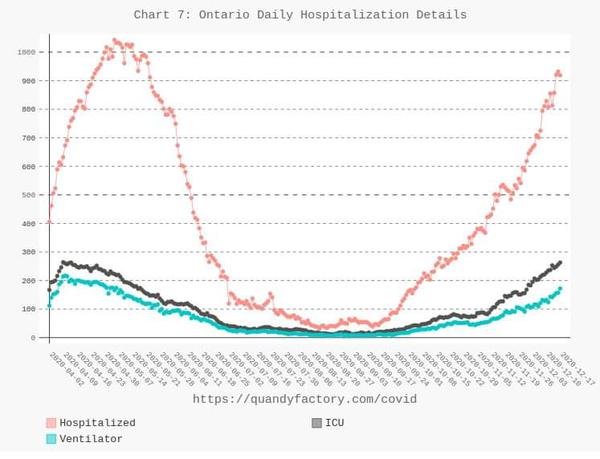