Jason tracks the ups and downs in the downtown.

Construction has begun this week on a new five storey residential complex on Strathcona Ave North. The site houses one of Hamilton's oldest firehalls built in the 1800's and pictured here. (if anyone can track down an official date, pass it along). 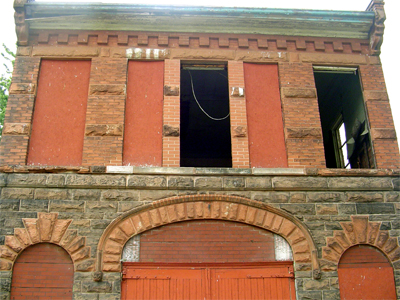 Forget elevators: the new building should preserve the pole

The plans call for a new building to be built adjacent to the firehall with the old hall then being revitalized and incorporated into the project. The original plans provided by the Hellenic Community of Hamilton proposed to demolish the firehall, but after Councillor McHattie received feedback from the residents of the Strathcona neighbourhood, he began to work with the Hellenic group. Thanks to the creative work of Ken Coit at city hall, the new residential building will be able to proceed as planned without demolishing one of the city's oldest buildings.

As a resident of Strathcona, much thanks goes to the Hellenic Community of Hamilton, architect Ken Coit and Councillor Mchattie for once again showing that there is a better way to develop real estate in our city than simply to demolish our built history.

The resurgence of Corktown continues, and a new loft project is now moving forward. The Augusta Lofts is a sharply designed building being carved out of an old, empty warehouse. Units start at $99,000 are there are only 18 available.

Construction tenders have now gone out for two more downtown residential projects, the five storey city housing building at King and John and the 15 storey condo/retail project at King William and Jarvis. Also, Deninngers is moving forward with plans to add residential units into their upper floors on King East in 2007.

Work is also progressing on adding a ten storey Hilton Hotel into the HMP building at Main and Bay. LACAC is evaluating the project and construction should begin in the spring.

Great news from King William Street – Plan B Organic Farms is going to begin operating a farmers market out of the Sky Dragon Centre on Saturdays from 9-3 during the winter. This will be a great spot for downtown residents to pick up locally grown, organic foods without leaving the city.

Many folks remember the local media coverage of the Tivoli Theatre collapse a couple of years ago. One morning an erroneous Spectator headline said that the theatre had been demolished. Many folks, including myself, flew over there to see for ourselves.

What we found was exactly what we went to bed with the night before – the lobby building was gone, but the theatre was still standing. Whew. Everyone breathed a little easier. That error was never corrected in the media, so perhaps there are still some of you today who think the Tiv is long gone.

Recently the Canadian Ballet Youth Ensemble announced plans to rebuild the entrance to this beautiful theatre. Let's hope they can raise the necessary funds so all Hamiltonians can once again stroll these aisles and sit in the plush seats during a performance. We've lost most of our historic downtown theatres over the years, but if all goes well, the Tivoli will back up and running in a few years. In the meantime, it's nice to see photos like this every so often as a reminder of what lies behind those boarded up walls facing James Street.

Gee, big surprise in a hotly contested Oakville construction project that will cut down some of the last oak trees in the city: the developer is from Hamilton.

The Government of Ontario Advanced Light Rail Transit, or GO-ALRT, program sounds wonderful, but information has been sketchy until now. A great article on the Transit Toronto website provides a wonderful history of the failed project, including details on the stymied efforts to extend it into Hamilton. Back when they were willing to invest millions here we ran them out of town – again, great leadership from city hall.

In other transit-oriented news, we may finally be getting those bike racks installed on those buses. In 2001, considerably ahead of the sustainable transportation curve, the City purchased a number of bike racks, only to discover that buses equipped with the racks would not fit in the HSR's new garage on Upper James. Since then, the racks have stagnated in Hamilton and other cities, including Burlington, have gone ahead and installed racks on their buses.

HSR Director Don Hull has maintained that the HSR has higher priorities than finding a way to install the racks, but in response to a recent letter from Transportation for Liveable Communities, Hull responded, "you will be pleased to hear that Council has directed that staff submit a request for Capital funding for bike racks on the buses for their consideration during their 2007 budget deliberations, expected to begin early in the new year."

In a city like Hamilton with a major geographic divide between the lower and upper areas, bike racks could significantly improve the city's cycling connectivity.

Just thought I'd add that the picture of Tivoli was taken by my friend George while we explored this building last weekend. We were lucky enough to gain entry for two consecutive trips before she was locked back up. He has more pictures of this building as well, if you're interested you can e-mail him at scourge133 at hotmail.com

Kind of funny, I don't think he knows that his picture is circulating so much!

Oh and by the way, the Tiv is brilliantly beautiful inside. If you can somehow arrange a tour of it a more "proper" way than I did, go ahead and do it.

I look forward to this Downtown Update every month. Keep up the good work.

Great to see the building at Walnut and Augusta being converted into a rather cool looking condo project. I live in the general area and always felt a little uneasy walking near that place at night. This will transform that whole corner.

Really enjoying the updates Jason. To be honest I didn't realize that there were so many positive things going on in the downtown core.

thanks hammerhead. yea, most people don't know what's happening downtown. I'm sure we're missing tons here too, but hey, this stuff is basically all stuff we stumble across in our daily travels. The point is, things are slowly turning around downtown. We know there are problems and things that need to be fixed, but find it a little disheartening when the general public and the local media only focus on those things. Let's highlight the positives and get out and support the new cafes and restaurants. That will result in more and new developments coming into the core, which is what we all want.

Has anyone heard if they are ever going to give the Hamilton City Centre(old Eaton Centre) a good cleaning ? I thought that once Harts moved in they would spruce it up a bit. It really looks awful on the outside.

Also, can we not get some cafe's or smaller retailers along the James Street side and the Wilson/York Street side of the building to set up shop ? Although it would help if we changed Wilson/York to two-way , at least from Bay to James.

Are the city planners looking at this at all? It seems like a prime retail corner that is wasted....

there are prime retail corners and streets being wasted all through downtown because city hall has always preferred to preserve the massive highways killing any hopes of street life. Hopefully our new mayor will change that.

I'm pretty sure when they finally release the Farmers' Markett redevelopment plan, I think in January, it'll include converting York into a two way street wih road side parking.

let's hope so. Everyone here needs to take a one hour trip to Allentown/Elmwood neighbourhood in downtown Buffalo.....look at what King, Main, York and Cannon could be with proper traffic management instead of our brutal highways. I never thought I'd be telling people to learn from car-addicted, sprawl-ville Buffalo on how to renew urban neighbourhoods, but the reality is, cities all over the continent are 'getting it' and doing things right. Hamilton isn't.

How do we make sure our newly elected leaders "get it" ? Who would be the "point-man" for the Farmers Market re-development plan ? Nice to see that we have a new mayor but he is only one voice on council.

let's not place eisenberger on a pedestal yet. at heart, he's no different from any other politician. for him, the key to winning that election was to differentiate himself from di ianni. he did that. now let's wait and see how much of it he actually meant. sorry for being tangential.

please oh please, don't bring up Jack McDonald. this is the same guy who called the Birks building 'ugly as sin'. Yea, as opposed to the ugly office tower that replaced it. He also loved it when the old city hall came down....he cut down the trees because he hates our history, past and built environment.

I second Jason's comment about the Elmwood/Allentown area in Buffalo -- it would be great to see our downtown could flourish like that. There are already a lot of similarities between Buffalo and Hamilton -- former beauty and glory, present overall depression with pockets of goodness, lots of suburban sprawl -- that it would be great if we could learn from them.

And thanks for these downtown updates -- I look forward to them.