It's dangerous nonsense to suggest that speed is not a factor when a moving vehicle kills a pedestrian.

On February 2, a 53 year old man was struck by a pickup truck while crossing Main St. E. at Park Row, between Ottawa St. and Kenilworth Ave., and died from the resulting injuries.

Police reported that the man was dressed in black and had a walker, and that snow was falling lightly. They also reported that speed was not a factor in the collision.

By making this claim, they are helping to promulgate a legal fiction that violates the laws of physics. As the vehicle speed increases, the risk of death increases exponentially.

The British Department of Transport issued a shocking report in 1997 titled Killing Speed and Saving Lives.

It found that the rate of pedestrian fatality on being hit by a vehicle rises from five percent at 32 km/h to 45 percent at 48 km/h to a devastating 85 percent at 64 km/h (the fast edge of the so-called "green wave" of timed lights). 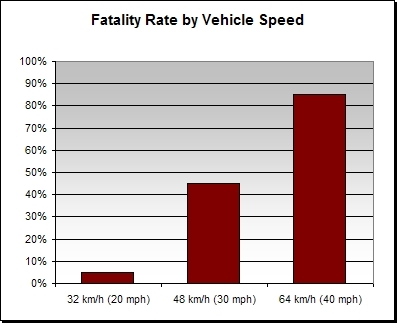 The speed limit on Main varies between 50 and 60 km/h. In the area where the collision took place, the speed is 50 km/h but most vehicular traffic follows the "green wave" and drives at around 60 km/h to take advantage of the timed lights.

Even if the driver was not exceeding the legal speed limit, it's dangerous nonsense for the police to suggest that 'speed was not a factor' in the pedestrian's death. The laws of motion are more binding than those of the Ministry of Transportation.

We know that if the car had been moving at 32 km/h, the pedestrian would have stood only a five percent chance of dying. Therefore, "speed" was absolutely a factor.

The problem is that the legal speed limit reflects a gruesome trade-off between safety and convenience. In Canada, we have collectively decided that we're willing to let 4,000 people a year die predictably, inevitably, in motor vehicle accidents so the rest of us can drive more quickly to our destinations.

Of course, the answer is not simply to reduce the speed limit to 32 km/h. Most motorists do not observe speed limits today, and lowering those limits further would hardly increase compliance.

A more effective response is to make it structurally difficult for motorists to exceed 32 km/h. A combination of related strategies will help:

This list isn't exhaustive but it gets us in the general vicinity of where we need to be.

Instead of engineering urban highways on dedicated routes, let traffic find its own path through the city's many east-west and north-south routes at a slower but saner speed. The goal is congestion.

Slower traffic means pedestrians will no longer be taking their lives in their hands every time they walk down the street.

This can only encourage more pedestrians to walk instead of driving, which will fuel a positive feedback loop of neighbourhood reinvestment, new business opportunities, safer streets, and still more attractive destinations for more pedestrians, all of which will reduce the need to drive.

Breaking the managed one-way flows also means that drivers get to trade slower speeds for more options. The increased redundancy will reduce bottlenecks and make it easier to reach micro-destinations directly (an individual address) rather than macro-destinations (i.e. the other side of the city).

It will also embolden cyclists, who will feel safer mingling with vehicles travelling only slightly faster than themselves, which will further tame the streets as well as reducing energy consumption, improving public health, and supporting local businesses.

This, of course, is almost unspeakable heresy in Hamilton, which prides itself on allowing motorists to span a city of half a million in 20 minutes. Still, the "green wave" is currently calibrated at a speed that is guaranteed to kill most of the pedestrians unlucky enough to be hit by a car.

This should be unconscionable, and the fact that people still defend one-way streets and timed lights says more about the utter primacy of cars in our thinking than it says about our ability to think clearly and weigh the relative merits.

The City is actually planning on implementing some of these ideas in creating more pedestrian-friendly neighbourhoods. For the Public Works Department to start coming around after decades of automobile primacy is an encouraging sign.

Unfortunately, due to their role in bearing tens of thousands of cars across town each day, Main and King - the two streets in most desperate need of calming - are exempted outright from improvement.

If Hamilton wants to enjoy the benefits of a safe, vibrant downtown, it must commit fully to the logic of urban development and stop muddling itself in half-measures.

There is another option. Enforce the law.

A quick trip across the border (NY or Michigan) will reveal highways that are similarly signed for speed, allowing for the metric conversion.

The difference is that they enforce the speed limit with a couple MPH and almost all drivers comply with that average speed. Here, you have to exceed 20 kmh over the limit to be stopped.

But once you've dropped the ball so badly, how do you pick it up? Photo radar. (by the response to the last attempt you might think Karl Marx invented it)

Our neighbour drives about 4 blocks to work every day, and comes home for lunch via car. If there was a stop sign at every corner (and laws exempting bicycles from stopping at stop signs), maybe she would buy a bike -- or walk -- instead!

wow. makes you realize that Ryan's articles on the negative impacts of 'free parking' are true. If she had to pay $5.00 a day, or even less to park she'd probably walk. 4 blocks. I can't believe that.