Vanishing into the American Gulag

Does Canada transfer detainees to the United States, and if so, what happens to them?

The furor over Canada's transfer of detainees in Afghanistan to Afghan authorities where they are subjected to torture started in late February and culminated in a new deal with Afghan officials that was announced on May 3.

The new agreement is "said to allow Canadians greater access to prisoners they have handed over to Afghan authorities," according to the CBC.

Absent from the discussion, however, is one strikingly important question: does Canada transfer detainees to the United States? If so, what happens to them? 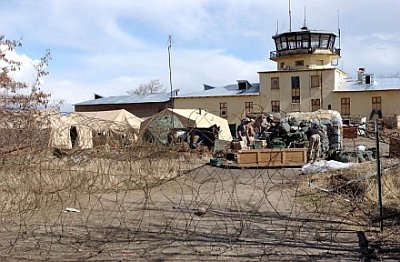 Where do Canada's Prisoners Go?

I've wondered for months why the issue of Afghan detainee transfers was being ignored in Canada.

On February 27, 2006, I posted Where do Canada's Prisoners Go? on my blog, pointing out that the people Canada captures in Afghanistan must end up in either American or Afghan prisons but that no one appears to have no idea of what happens to them after that.

The most likely destination for detainees handed to American forces is Bagram, an American air base 80 kilometres north of Kabul that used to be a machine shop.

On February 26, 2006, a day before I published that blog piece, The New York Times published A Growing Afghan Prison Rivals Bleak Guantánamo:

While an international debate rages over the future of the American detention center at Guantánamo Bay, Cuba, the military has quietly expanded another, less-visible prison in Afghanistan, where it now holds some 500 terror suspects in more primitive conditions, indefinitely and without charges.

But some of the detainees have already been held at Bagram for as long as two or three years. And unlike those at Guantánamo, they have no access to lawyers, no right to hear the allegations against them and only rudimentary reviews of their status as "enemy combatants," military officials said.

From the accounts of former detainees, military officials and soldiers who served there, a picture emerges of a place that is in many ways rougher and more bleak than its counterpart in Cuba. Men are held by the dozen in large wire cages, the detainees and military sources said, sleeping on the floor on foam mats and, until about a year ago, often using plastic buckets for latrines. Before recent renovations, they rarely saw daylight except for brief visits to a small exercise yard.

The information on abuse at Bagram was contained in documents by US army investigators that were released after a lawsuit by the American Civil Liberties Union. The documents show that "an Iraqi detained at Tikrit in September 2003 was forced to withdraw his report of abuse after soldiers told him he would be held indefinitely":

In the dossier, the Iraqi detainee claims that three US interrogators in civilian clothing dislocated his arms, stuck an unloaded gun in his mouth and pulled the trigger, choked him with a rope until he lost consciousness, and beat him with a baseball bat.

A medical examination by a US military doctor confirmed the detainee's account, yet the investigation was closed last October. "It is further proof that the army is not seriously investigating credible allegations of abuse," said Jameel Jaffar, a lawyer for the ACLU.

Detainees handed over to Afghan authorities most likely end up in Pul-i-Charkhi, Kabul's biggest prison, which at the time I wrote my blog post, was in the throes of a massive riot.

The riot apparently started because "Taliban suspects, about 200 of whom were being held without trial, were demanding to be tried or freed", according to Reuters story that is no longer available online.

Unable to find any information about the fate of Canada's prisoners and upset by what I had learned about their most likely destinations in Afghanistan, in early March 2006 I wrote Canadian officials with my questions.

I mailed letters to Gordon O'Connor, General Rick Hillier, and Michaëlle Jean (who is the honourary Commander-in-Chief of the Canadian Forces) with my questions. Among the questions I asked were:

I received responses from the offices of all three officials, but the only one worth reproducing here, in part, was from General Rick Hillier:

As you can appreciate, due to operational security reasons, some of the information you requested cannot be released. However, I can provide general information on the policies and agreements surrounding the handling of detainees by the CF in Afghanistan.

As part of this arrangement, the detainees are treated humanely in accordance with the standards set out by the Third Geneva Convention (the Prisoner of War convention), and all transfers are pursuant to international law.

I received that response in late March 2006. A year later it would become apparent that General Rick Hillier's letter was nonsense.

There is a steady trickle of evidence of mistreatment, abuse and torture from America's international gulag of secret prisons and extra-legal detention facilities.

On April 5, Amnesty International released a report entitled Cruel and Inhuman: Conditions of isolation for detainees at Guantánamo Bay.

On May 13, Harper's Magazine reported that 19,000 Iraqis have "disappeared" into US-run prisons where they enter a "legal vacuum" so impenetrable that friends and family do not even know if they are still living.

On May 16, American Jose Padilla went on trial for allegedly "filling out an application form to become a jihadi, or holy warrior", as reported in the Globe and Mail, a remarkably minor charge given he was originally accused of plotting to attack the US with a radioactive "dirty bomb".

Padilla has spent five years in prison, most of it in solitary confinement. He was denied access to a lawyer for 21 months and was imprisoned for three years before being charged. He has endured isolation and even sensory deprivation so complete that he now suffers from mental illness.

If this is how the American government treats American citizens, how do you suppose they treat Afghans and Pakistanis captured in Afghanistan?

The Harper government should make detainee transfer policies crystal clear. Canadians ought to know if people we are responsible for are vanishing into the American gulag.

Who cares what happens to captured terrorists. It is left leaning people such as yourself that contibute to terrorists to begin with.