As oil production goes into decline, we must transform the way we move people and goods. 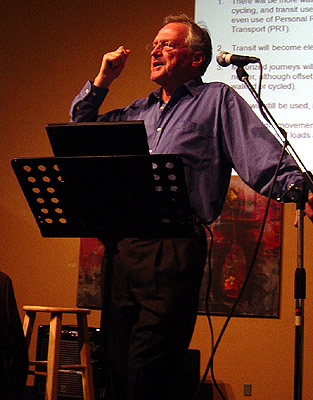 Richard Gilbert occupies a special place among urbanists and environmentalists in Hamilton. The author of Hamilton: The Electric City [PDF], Gilbert recommended to City Council that Hamilton prepare for oil depletion by making energy production and conservation it's Economic Development Plan A.

Based on the research into peak oil that he conducted for his report, Gilbert began work on a new book (with coauthor Anthony Perl) about transforming our transportation systems for a post-carbon economy, titled Transport Revolutions: Moving People and Freight Without Oil. (Watch for an RTH review in an upcoming issue.)

Gilbert was in Hamilton on January 10 to talk about the book in a seminar organized by Hamiltonians for Progressive Development (HPD), followed by a panel discussion with Chris Harrison from Vermeulen Hind Architects, Nicholas Kevlahan from Hamilton Light Rail, Lynda Lukasic from Environment Hamilton, and Scott Stewart from the city department of Public Works. 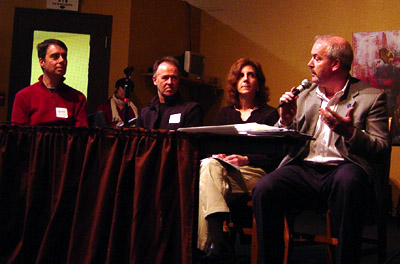 The Case for a Transport Revolution

Globally, 95 percent of transport relies on oil (and transport accounts for 60 percent of total oil consumption). Economists have estimated that a four percent shortfall in oil production could cause a 177 percent incraese in crude oil prices, so transportation is highly vulnerable to production declines.

In fact, Gilbert argued that peak oil is a more pressing, more compelling issue than climate change. He cited three arguments: the evidence for peak oil is stronger, its arrival is more imminent (most projections place the peak between now and 2012), and the message is more appealing.

I think Gilbert downplayed the strength and robustness of the evidence for climate change, possibly because he's simply more familiar with the case for peak oil. He sounded rather defensive when he made his argument (perhaps anticipating a backlash from a room full of environmentalists), and seemed to have a hard time moving past it.

However, his other two points are harder to dispute. As he put it, insulating oneself from very high gas prices is "a more compelling argument than protecting yourself from a warmer winter."

Gilbert tossed out some estimates about the economic effects of oil production declines, but cautioned that such projections are "fanciful" because "the economics of scarcity at this level are not well developed."

As an aside, he noted that so far, gasoline prices have risen much more slowly than crude oil prices, which have risen fivefold since 2000. This is ironically because of high gas taxes, which make up a large proportion of the pump price and mute the increase in the oil price component of the total.

Gilbert reviewed some possible alternative fuel sources and dismissed most as impractical:

Biofuels: they compete with food for land, deplete the soil, and have very limited applicability outside of ethanol from sugarcane in tropical countries.

Natural Gas: North American production is already past its peak, it's very hard to move between continents, and methods for converting it to gasoline are not very effective.

Electricity: He caled this "a perfect transport fuel", aside from the problem of on-board storage. Electric motors are six times more energy efficient than internal combustion engines and have maximum torque at the lowest speeds (the reverse is true of engines).

Compared to electricity, the only advantage of internal combustion is the very high energy density and portability of its fuel. A gasoline tank is a hundred times more energy dense than an equivalent battery.

After factoring in the higher efficiency of an electric motor, internal combustion can still move its vehicle 17 times the distance on a full tank.

Electric motors function best when they are connected to an electricity grid and do not have to carry their energy source around with them.

Another advantage of the grid is that any energy source can be converted to electricity, so the energy distribution system will not have to be rebuilt every time the fuel source changes.

Dealing with the Toughest Cases

The book focuses on the USA and China as the toughest economies to change in the industrialized and developing world, respectively, because they are the biggest consumers and will require the most effort to transform.

He pointed out that New York City singlehandedly accounts for one third of American passenger rail.

2. Increase use of rail and water for goods transport rather than trucking.

Discussing the issue of air transport, Gilbert noted that no breakthroughs in air transport fuels are on the horizon to replace the high energy kerosene used today.

He believes air transport will shift toward fewer flights with much larger airplanes (like the Airbus A380) and will focus mainly on intercontinental flights, with high speed rail replacing most intracontinental flights.

"Aviation will have a future," he argued, "but it will be a different future" than the way the business operates today.

He maintains that we need to stop investing in airports and spend our money on rail instead.

Aim for a Soft Landing

Gilbert argued that it's better to plan for a "soft landing" by acting to reduce oil dependence than to do nothing and react to higher prices.

The latter may well produce a "hard landing" characterized by disrupted supply chains, acute shortages, and economic depression and even, possibly, total collapse.

However, he insisted that he is an "optimist" and that a soft landing is achievable if we start now and act quickly.

Gilbert's arguments are generally sound but hardly depart at all from the academic centrist approach to the pending energy/climate crisis. I remember the case for "peak oil v. climate change as civilazation's most pressing concern" being argued as far back as a second year geology class. Nothing new. Moreover, Gilbert seems to be aping a lot of what Chris Paine argued in WKEC? (particularly with regards to the unfeasibility of hydrogen fuel cells, a criticism which has been much maligned as short-sighted and tendentious of late). Again, this is not to impugn the soundness of the arguments but rather their originality.

As for Gilbert's recommendation that we "Increase use of rail and water for goods transport rather than trucking", this sounds nice but I suspect it's ultimately unrealistic. Anyone who has ever worked in logistics knows that rail and water transport are only truly useful for transporting very large quantities of goods across vast geographical distances. Rail and water are almost always cheaper than truck transport and companies naturally employ these modes of transport whenever possible. However, rail and water almost never deliver to points of sale and are simply unamenable to the fluctuating itineraries of modern businesses. Mammoth infrastructure expenditure (particularly in North America) would be required to make rail and water transport even remotely competitive with the speed and precision afforded by truck.

In general, I fail to see anything new or truly incisive in Gilbert's critique. His recommendations are so blatantly obvious (except perhaps to the governing minds of Hamilton) that they seem utterly redundant in the wake of all the energy crisis rhetoric flying through the mainstream media today. Yes, yes cycling and "collectively managed transport" are superior to the paradigm of the three-car family which does its banking at a drive-thru but who hasn't had this drilled into her/his head repeatedly over the last ten years? Nowadays it just seems like pablum.

One of Gilbert's little publicized recommendations is that Hamilton generate electricity by using state of the art energy from waste technologies. In fact he says Hamilton is positioned to lead the region, if not the province, in this aspect of creating green power. Those who love Gilbert for his pronouncements on the oil crisis always downplay or ignore these recommendations. I wonder why?

Statius has it wrong when he suggests that a move away from trucks is unrealistic.
There will be no choice, if the price of diesel does not force it governments will ration trucks off
long distance cartage and restrict them to rail head delivery.
Agriculture will get priority and the rest of us will get by on what is left.

Ryan, the waste to energy idea has to start somewhere. Don't be surprised if once, it's operating efficiently and on it's way forward if it does expand to take waste by rail or shipping. The location is prime for both and I don't think that's a coincidence.

You sidestepped my point altogether and failed to address the reality that rail and water transport are simply impracticable to meet the day to day transport needs of modern businesses by recourse to a tangential argument of necessity. It is fantastic to imagine that government will ever impose such draconian rationing as you suggest. (You really are deluding yourself if you think this is going to happen - it just isn't politically realistic given where the power bases of party politicians lie). It won't have to. You are right to argue that the rising cost of diesel may eventually force businesses to adopt other means of long-distance transport, but this will be an evolutionary change - i.e. business models will adapt slowly over time to accomodate changes in cost structures, etc. (they already are, as they always have). My argument in any case wasn't that businesses will continue to be able to rely upon trucks to the extent that they do now indefinitely, but rather that it is unrealistic to imagine that rail and water transport will be able to provide an adequate substitute.

there's info on intracity lrt transport at www.carfree.com. the author's also written a decent book of the same name.

I am surprised to see nothing on psychological, social, and political resistance to change which seems to me to be the biggest threat to implementing Gilbert's otherwise sensible, scientifically derived direction.

statius, you get high marks for floral language but miss the point of massive subsidization of trucking infrastructure presently:

"Mammoth infrastructure expenditure (particularly in North America) would be required to make rail and water transport even remotely competitive with the speed and precision afforded by truck."

"Competitive" implies a level playing field, i.e. subsidizing (or not) all modes equally. Since this is not the case, medium to long haul trucking, presently subsidized relative to other modes, would lose its competitive advantage to rail and water. On the other hand, short haul transport will still favour trucking.

Climate change may indeed be self-limiting by peak-oil, so it seems moot. Nobody will be the first to shut-down their economy to help deal with it anyway.

Before we compare the efficiency of alternatives, we need to look at it from the other direction and ask how far alternatives would need to fall short to create the anarchy from starving, homeless, and freezing people that would limit further progress.

@David: "we need to look at it from the other direction and ask how far alternatives would need to fall short to create the anarchy from starving, homeless, and freezing people that would limit further progress."

Atta way to set the bar nice and low. :/