Bring on the Gas Tax

Let's stop paying the high price of fossil fuels through the subsidized method of general taxation.

The thing I dislike most about partisan politics is groupthink conformity of opinion on issues. This leads to a superficial or even mindless analysis of important issues, sometimes even contradicting core values.

There is no better example of this hypocrisy than the most recent incarnation of the Conservative Party. In this example, we will see how an issue is sandwiched between the incompatible values of defending tradition and condemning a subsidized economy.

I refer of course to the barrage of ads slamming Liberal leader Stephane Dion's carbon tax. In fairness, the Liberal "Green Shift" policy is watered down by exempting gasoline from any new carbon tax (which differs from the impression left by Conservative scare ads).

Thus, the Liberal policy on carbon tax, in an effort to appease voters, makes about as much sense as the Conservatives' EcoAuto, which exempts trucks!

In Canada, taxes will always be a fact of life. Railing against them is not going to be very productive, because in our version of democracy, individual voters have less and decreasing power than large corporations.

Not surprisingly, the tax burden has been slowly but surely shifting from business to individual taxes for several decades.

But these are changing times, and for a rare moment we do have a choice about how we pay tax.

There are three basic ways we are taxed:

The gas tax is a subgroup of sales tax. The amount is nearly fixed, but does change slightly based on the pump price. Here's an example from 2006: 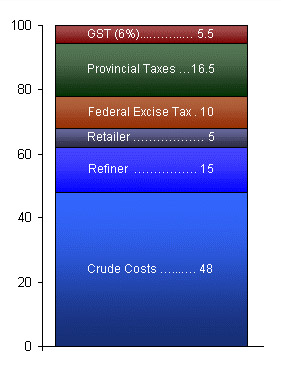 Approximate Price Components of Gasoline at $1 per Litre (Source)

Note: Note: Values for crude, refiner and retailer are estimated and are for demonstration purposes only.

In Ontario, one of the lowest taxing provinces, if the numbers are still current, there are fixed costs of 10 cents/L federal tax, 14.7 cents/L provincial tax, and variable costs of now lower 5% GST.

When people blame the government for the high cost of gas, they are misled.

The very useful thing about a gas tax is that it potentially ties revenue with spending. When you buy more gas, it is because you drive more, which demands more space on public roads, increases the chances of collision, and produces more pollution. Or it may mean you drive a heavier vehicle, which accelerates the damage to pavement and requires more frequent road maintenance.

In any case, it means the people using a service pay for the service. This principle is one of the core values of the small 'c' conservative, and is a value I personally support, with the following exceptions.

There are several situations in which it does not make sense to bill people for the services they use. Police and fire prevention are impractical to do any other way than through conventional taxes.

Libraries and schools provide benefit for all of society, not just their users. In health care, the vagaries of bad luck could easily bankrupt people through unpreventable diseases, and it is completely uncivilized to consider placing that entire burden on health care consumers.

The difference with roads, and the burning of fossil fuels in general, is that there is no longer any public benefit to subsidizing them.

There is however, a lot of harm generated: environmental destruction at source, C02 induced climate change, air, water and soil pollution, and premature traumatic death and disability.

Approximately 40 billion litres of gas are burned annually in Canada. At a price of $1.30 per litre, gas taxes average $0.32, so revenues are around $13 billion annually.

Our roads are one of the largest social programs that eat up government money. The gas tax does not fund all of the consequences of driving. A recent study found that the 'social costs' amount to somewhere between $24.5 and $39.5 billion annually in Canada.

Roughly, that is $1000 per person per year, but that may be a low estimate. An Ontario government study from 2007 pegs Canadian costs for fatality and injury alone at $63 billion annually. Be clear that 'social' does not mean arbitrary; these are actual costs paid by government or insurance, or lost productivity costs for the economy in general.

Then there is the cost of road building and maintenance. From what I can gather from 10+ year old data, costs are around $12 billion annually, and this doesn't take into account the massive and increasing infrastructure debt that is accumulating from delaying important repairs.

We are probably underspending by about 50% on road infrastructure.

So instead of the current 32 cents, the bare bones costs of driving justify a gas tax of $1.50/L.

Add to this some value for environmental remediation of destructive practices like mining the tar sands.

Add again an amount for adapting to climate change, which any insurance adjuster will confirm will be a massive number.

And perhaps it is logical to shift your auto insurance premium from a fixed sum to one that varies with the amount of gasoline burned.

We could also use part of a gas tax to engineer a shift to a greener, more efficient economy, by funding R&D and conservation retrofits.

All together then, it is economically justified to conservatively establish the gas tax at $3/L, pushing current pump prices to $4/L. If that sounds ridiculous, it is only because you are clinging to the status quo, and not thinking about the issue or the inconsistencies generated by defending it.

The other benefit of a huge shift in taxation from income and residential taxes to gas and carbon taxes is pricing stability. If taxation makes up the major part of the price at the pump, then wild price fluctuations are avoided. Economic forecasts for long term business plans would be much more reliable.

Current gas tax revenues do not even come close to footing the bill for the consequences of driving. We subsidize driving through other forms of taxation.

By overutilizing roads, you are simply being logical: if you have already paid for it, you might as well get your money's worth and drive as much as possible. There is no incentive for responsible behaviour.

If we shelve the subsidized approach, there are two basic methods for pricing roads: tolls and gas tax. I favour gas tax, because it is so much easier and cheaper to manage. The only practical problem is getting the United States to buy in. 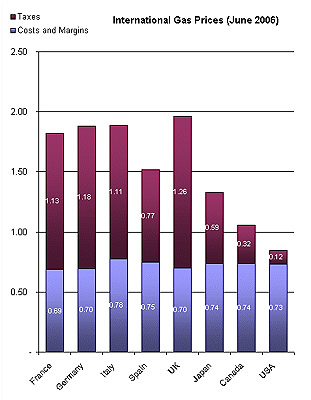 Canadians need to get with the program and start demanding a carbon tax and much higher gas taxes.

Stop paying the high price of fossil fuels through the subsidized method of general taxation. Let's start being more small 'c' conservative, which, oddly enough in this instance is best represented by the centre and left parties in Canada!

Dr.Ted, I like your idea of drivers paying for the benefits they receive, but I don't think gas taxes would do anything about traffic congestion.

More likely, the market would start demanding greater fuel efficiency, negating much of effect that higher fuel costs would bring.

To be sure, a higher fuel tax would change drivers behaviours, but perhaps a second look at toll roads is also warranted.

Electronic tolling of roads target traffic volume directly. Since prices could be set to maximize traffic flow, it also has the added benefit of reducing emissions.

I am not against the idea of using fuel taxes to help in the upkeep of roads, but perhaps a two pronged approach would be more effective in making driving both safer, and a more enjoyable experience.

I think that a higher gas tax would be great for the economy. When it comes to jobs being shipped overseas, it only happens because the lower cost of labour offsets the raised cost of transporting the goods back to the local area.

Imagine how many local manufacturing jobs would be created as companies move factories back from Asia.