New York City Shows Us How It's Done

Check out these unreal photos from NYC, featuring the weekly Ciclovia and pedestrian Times Square, in a recent photo tour posted to SkyScraperPage. 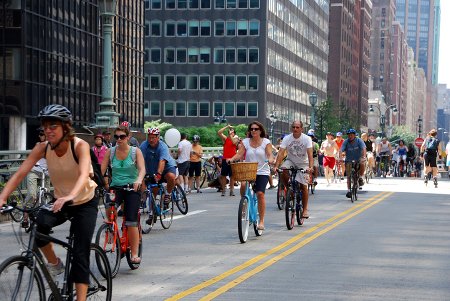 For Pete's sake, a city of that many million is finding ways to move forward and try new ideas while we sit here paralyzed at how our half a million people will survive if we convert Main and King Streets to two-way and if the two blocks of King south of Gore are closed to traffic. 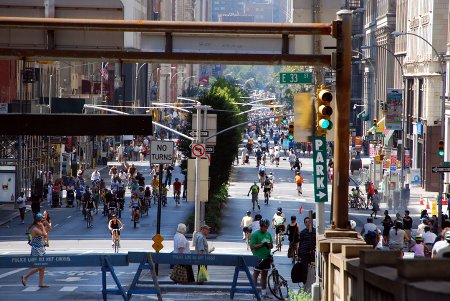 Ciclovia (Spanish for "Bike Path") started in Bogota, Colombia on Sundays and holidays and first migrated to New York in the summer of 2008

It boggles my mind how we can allow a small band of squelchers and old-fashioned thinking to hold us back here when all across the continent, cities are waking up and moving forward. 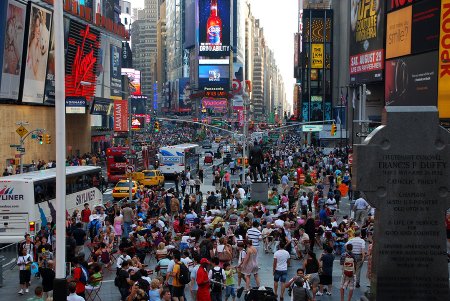 Oh well; it's not like we're competing with these cities in a global economy or anything.

The old-skool thought process hates it when you lay the proof.

What percentage of people in Hamilton would rather ride their bikes than drive their cars? Give me a figure? 2%, 5%, 25%, 50%? If it's more than 50%, then why aren't politicians getting flooded with angry mail from their constituents? Where are the protests?

If it's less than 50%, then you're suffering at the hands of your blessed democracy. You, Ryan and others that love the idea that the majority vote should dictate how all tax dollars are spent are getting exactly what you call for, rule by the majority.

I, on the other hand, DON'T like the idea that the majority should decide where all the tax dollars are spent. I would rather every person keep as much of his/her money as possible, such that they could build their own infrastructure without having to go convince the majority to go along with it.

If you believe in big government, then you deserve to get only what the majority thinks you should. In Hamilton's case, it's lots of roads for cars and trucks and sh!t all for cyclists. Oh, well, that's democracy.

A Smith: I thought you did not believe in protests, I am sure that you have commented on direct action like this before, as something that should not happen.

Gee I wonder if it would be in the people's best interest to actually poll every person in this city to see what their thoughts are on infrastructure for bikes?

Grassroots >> I wonder if it would be in the people's best interest to actually poll every person in this city to see what their thoughts are on infrastructure for bikes?

If enough people write their elected officials, cyclists will get their bike infrastructure. The fact that it hasn't happened yet indicates the majority of the public in Hamilton don't really care. In a democracy, if you're in the minority, yoru wishes don't matter. Sad but true.

A Smith Writes: In a democracy, if you're in the minority, yoru wishes don't matter. Sad but true.

No, that is not necessarily true. If we look at the numbers of people who are not voting, they are the majority, yet we have the minority who have voted having the ablity to make decisions for the rest of us.

not true at all. In a true democracy everyone matters. Sadly we have seen our democracy hijacked by the rich and now only they matter. Hence the reason "socialism for the rich" more aptly describes our political system. Democracy was bought out many, many years ago.

It's actually 100% untrue. It's only applicable if you are in the minority of every opinion (like crazy pants McGee). If you take a sample group and ask them 2 questions where some variance in results would be expected your poll result will return four categories YY, YN, NY & NN. If the questions are more fact based, or more similar to one another, like, "Is evolution accurate" and "Is the Earth older than 10k years", most of the results fall into YY or NN, but if the questions are on debatable topics on varying issues, like "do you support the death penalty" and "do you support placing a term limit on government", the answers begin to be spread out among YY, YN, NY & NN, leaving all parties in the minority. So when literary thousands of issues have to be decided in a year's council session, there is no majority and people will (or at least should) find themselves agreeing and disagreeing with every person. People compromise. People come to some sort of consensus. Representative and direct democracies are completely different systems.

Of course reading Jason's post reminds me that having actual choices is required. Which always reminds me of "Don't blame me, I voted for Kodos".

Jason: Yes I do agree with your statement, as today many feel disengaged, not connected with the system, they feel their voices are not heard, thus the low voter turnout, we see.

Jon C: Yes what you say makes sense as well, I guess I should of worded my thoughts in a different way. I was trying to make a point but it did not come across so well. Win some, you lose some.

"Win some, you lose some." Now that's a democracy!

I knew what you meant (I think). Additionally, that the marginalized vote less frequently aggravating the problem. My comment was more directed towards the previous commenter.

Yes, I know, that commenter can be annoying. Hey, many good people in the city working on things from many different aspects. Have a good day.

To function as a society. Plus some people, such as yourself, are too short sighted to observe long term impacts and make faulty correlations that would cause you to seriously harm yourself or others.

JonC for the love of all things holy......please stop replying to this yahoo! You're only just encouraging him at this point.

JonC, the troll is getting desperate and trying to manipulate you into feeding him again. Don't take the bait!!