An astute RTH reader recently alerted me to an interesting feature about the new LED sign in front of City Hall. 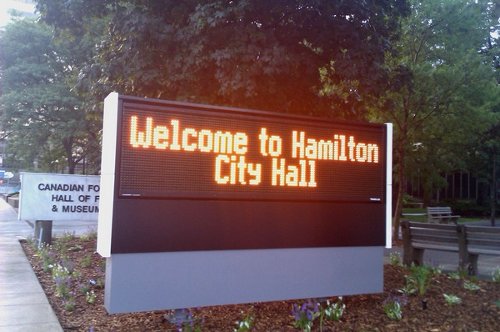 Like the famous Art Gallery of Hamilton sign that overhangs King Street a block away, the City Hall LED sign is only viewable from one direction: 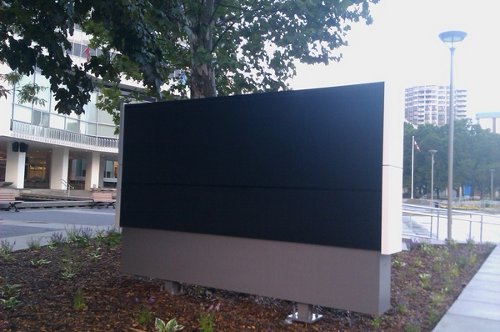 This is as good a symbol as any of the city's unrelenting dedication to traffic flow at the expense of all else.

What I always notice about that sign is that it completely obscures the Canadian Football Hall of Fame sign. Talk about being good neighbours, eh?

What, you're not eager to learn more about the Canadian Fo Hall of F?

i'd like to see the attendence records for the Canadian Football hall of Dustmites and crickets. At least neither of these two signs have fallen over....yet.

"we can't solve problems by using the same kind of thinking we used when we created them." ~ A. Einstein

They're leaving the other side blank for the Country Style Donuts sign.

I distinctly find this non-funny.

Your city blatantly declares that only people in cars are worth welcoming.

People walking on the sidewalk who may be headed the other direction...have no value to your civic leaders whatsoever.

It's no wonder Council is so willing to cave to move the stadium out of the harbour location. They can't concieve of any perspective other than from behind the wheel of an automobile.

What? Couldn't they get one of those nice ones on wheels with the day-glo letters and wire mesh?

I noticed this earlier, but at the risk of seeming too critical decided to let it slide.

Well, no more. It sucks. And it's really frustrating.

Naw, it fits-- we do everything bass-ackwards here.

Weclome to? That would imply the car stopping at City Hall..... should more accurately read "Thank you for speeding past Hamilton's NEW City Hall.... we hope you catch your next green light!"

i was just there and i love the fact that they couldn't save the marble but they chose to not replace the historic concrete steps and pavers leading up to the entrance that are severely worn. seriously? this one detail makes everything look shoddy. with all the money they spent would another $50k have not been merited? no wonder it is on time and under budget, it isn't finished!

You know, I've always defended the City Hall reno, and thought the uproar over the marble vs. concrete debate was pointless at best, but this sign is HIDEOUS.

I liked the quote by Einstein...and i have always saved or jotted his quotes.

I like some posts but some stories I have no interest in. I like to see more cycling. bike lanes. improved roads. better intersections. less car friendly more people friendly roads (we live here)...

better smoking enforced laws I mean smoking is epidemic in this city morning to night. Cars/heavy traffic ruins roads and city(s) can't keep up with maintenance.....any other rants & I'm correct....