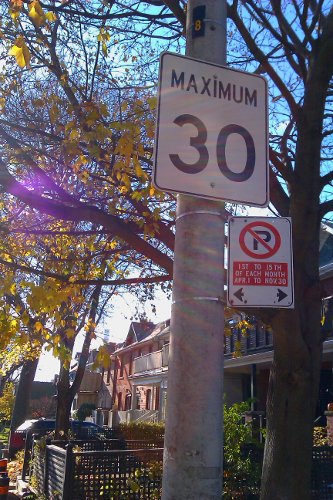 Demonstrating compartmental thinking - or perhaps we should call it departmental thinking - at its worst, members of Toronto City Council are scoffing at a proposal by David McKeown, their city's Medical Officer of Health, to reduce speed limits on public health grounds.

Toronto's top doctor wants speed limits in Canada's largest city reduced by 10 to 20 kilometres an hour, an idea that'll be a tough sell when he pitches it to the Board of Health on Monday.

When Medical Officer of Health David McKeown revealed his proposal last week, it was panned faster than the speed of a car on one of Toronto's 60 km/h arterial roads.

Mayor Rob Ford dismissed it as "nuts, nuts, nuts, nuts," while the head of the public works committee urged Dr. McKeown to "stick to his knitting," unless he's after a job in the transportation department.

McKeown's recommendation to yesterday's Public Health committee is just one part of a more comprehensive report, titled Road to Health: Improving Walking and Cycling in Toronto [PDF link], that proposes a broad commitment to creating a healthier transportation network. It includes the following:

The committee backed away from the speed limit proposal, proposing instead that the limit should only be imposed on neighbourhoods that ask for it - and that the decision must be approved by council.

Cities like Toronto are clearly not in the habit of thinking about speed limits in terms of public health, but it is exhaustively understood that the risk of pedestrian injury and death increases geometrically as motor vehicle speed increases. At 32 km/h, the risk of death is just 5 percent, but that jumps to 45 percent at 48 km/h and to a devastating 85 percent at 64 km/h.

A vehicle traveling at twice the speed needs four times the distance to stop. As a result, faster vehicles don't merely cause more serious injuries in a collision, they are also more likely to be involved in collisions in the first place.

While other cities around the world, ranging from Portsmouth to New York City, are taking steps to find a better balance between safety for pedestrians and convenience for motorists, other cities remain mostly stuck in the tired presumption that through traffic is sacrosanct and safe pedestrian space is expendable.

Toronto's health report recalls a request a few years ago by Hamilton's North End Neighbourhood Association (NEN) to establish a 30 km/h limit in the North End as a pilot project for the City. Staff and council shied away from the proposal, which was part of the neighourhood's Setting Sail secondary plan, and the NEN appealed the matter to the Ontario Municipal Board.

The OMB heard the appeal between November 2010 and August 2011, but has not yet rendered a decision. NEN vice-president Sheri Selway points out that New York City has already established a pilot project with area-wide 32 km/h (20 mph) slow zones, inspired by a landmark study that connects pedestrian fatalities to high speed traffic.

A nice thought, especially in areas where there are children, such as parks, schools, and the like. But, the real issue is - will there be police enforcement? We can enact all kinds of laws and bylaws but if nobody is there to ensure they are followed, why bother?


I think that speed limits should be 50km on major roadways. Anything less would be insane because people wouldn't abide by it. Most people do 60 km now anyways.

I do think that limits should be reduced to 40km in residential areas (namely side streets). These streets are likely to have children playing on them and don't have traffic lights at intersections.

>> Anything less would be insane because people wouldn't abide by it.

They would if they brought back photo radar.

I remember driving on the 403 in the early nineties and it was great. There was far less speeding, far less weaving in and out of lanes, it was almost relaxing.

If the city used photo radar fine revenue to cut property taxes to the dollar, there wouldn't even be the issue of a tax grab.

I have to admit, having never driven with photo radar set up, I don't know what the fuss is about.

On my Hamilton-to-Mississauga round trip every day, I do 100 in the right-hand lane the whole way. I see all kinds of nonsense on the roads - excessive speed, dangerous driving like tailgating, sudden stops, weaving, no signals, cutting people off - and don't get it. If I drive 110 km/h, I get to work maybe 3 minutes faster. But, I burn more gas doing so. These fools who treat the road like their personal racetrack seem to be the ones complaining about it.

I think we should seriously look at bringing back the tools to make the roads safer. Increased police presence on the roads, with more stringent enforcement, coupled with tools like photo radar should make them safer.

I think to whenever I go to Niagara Falls or Buffalo, NY - almost as soon as you hit the Interstate you see state police with speed traps set up, or a cruiser on the shoulder with someone pulled over. Those stretches of the I-90/I-190, at least in my experience, are a lot safer speed- and driver-wise.

So....exactly what we have today. In other words, do nothing.

No. The speed limit on side streets is 50 km.

I don't know where you live, but on my side street the speed is 40 kph. And it's too fast.

Perhaps you live in a school zone.

Not a school zone but a narrow street in an old part of town. Looking further it looks like your right, the speed is 50 kph unless marked. I always thought the speed was 40 on residential streets. Things are even worse than I thought!!

Good article, note that quite a bit of solid research has been done on this issue in the US and Europe, and some as related to urban environments and population health outcomes in Canada (for examples regarding aging urban populations, see P. Masotti et al for policy discussions regarding high volume automobile traffic areas that surrounding Naturally Occurring Retirement Communities). Agreed that some decent level of enforcement must be part of such policy, yet the peanut gallery notwithstanding, the debate on municipal traffic and vehicular policy cannot move forward until a discussion related reducing the impacts of high traffic densities on urban health begins. This is good use of this forum.

Rousseaux has fascinated me for a few years now, ever since the the big-box explosion and full highway interchange went in.

I fully expected to see an exodus followed by deterioration and then road widening on what was clearly becoming a major connector/access road. And yet the opposite happened: houses were spruced up, and new and larger homes were built; the road was narrowed by adding medians; streetscaping and Ye Olde Street Lights went up.

The road became busier and nicer. Rather an unusual combination.