Still Struggling to Make Sense of City Policy on Crosswalks

In a recent blog post, I wrote about the long struggle - more than a decade - to get decent pedestrian amenities built in Hamilton. In particular, I wrote about former traffic manager Hart Solomon's determination that painted crosswalks did not qualify as legal crossovers and would expose the city to liability risk.

It seems that Solomon somehow decided the pushbutton-activated Pedestrian Crossovers (PXO) used in Toronto, with overhead flashing amber lights, were the only solution at intersections as well (apart from stop signs or traffic lights), even though pedestrians always have a de facto right to cross at intersections under the Ontario Highway Traffic Act (HTA). (Note: PXOs are very rare outside of Toronto, although they are described in the HTA regulations.)

Years later, I even sent city alternative transportation manager Daryl Bender some photos of sign-and-painted-lines crossings from other towns in Ontario to convince him that such crossings are legal, but the engineers claimed that these signs in other Ontario towns were all illegal.

More recently, Hamilton traffic engineers have also determined that PXOs are not as safe as crosswalks with full traffic signals, which cost $80,000 to install and must be approved by the Public Works Committee and Council.

This raises the bar even higher for any street infrastructure to indicate that pedestrians are actually allowed to cross the street at intersections! 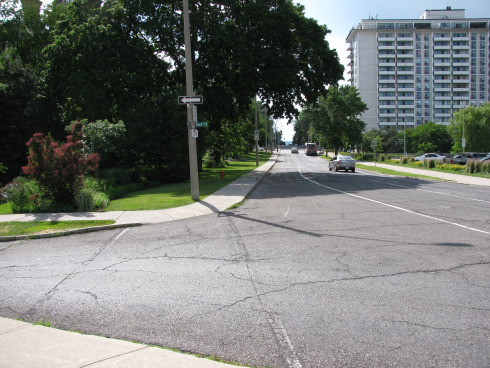 Ghost Crosswalk at the corner of Hunter and Park (Image Credit: Undustrial)

The fact is that most of Hamilton's ghost crosswalks actually are at intersections, so Hamilton's policy has effectively been to deny pedestrians their existing rights by making those rights invisible to drivers - and eventually to pedestrians as well, after the lines faded.

Why don't the police and government publicize to drivers the fact that pedestrians have the right of way when crossing legally at an intersection? This is certainly the understanding of everyone in western Canada, where I used to live and where motorists routinely yield to pedestrians at crosswalks.

Solomon's attitude may also have been mixed up with the fact that in practice it is very difficult to convict a motorist who hits a pedestrian, even when the pedestrian is crossing legally at a crosswalk. The standard penalty for killing a pedestrian legally crossing in crosswalk is a $500 fine.

However, that would argue against Solomon's 'liability' argument. This may have been what he meant by claiming drivers don't have to yield to pedestrians: that given the way the law is actually enforced, drivers effectively can run over pedestrians with impunity, so pedestrians should simply never cross the road!

This has indeed been a 'solution' proposed by the City for intersections with high pedestrian casualty rates: simply ban pedestrians! 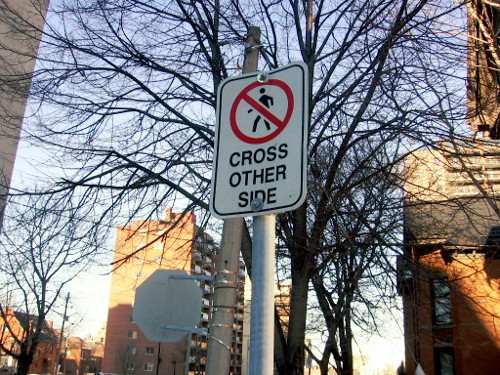 "Pedestrians Cross Other Side" sign on the east side of Hughson at Charlton. Signalized intersections all around St. Joseph's Hospital restrict pedestrian crossings to one side or the other. (RTH file photo)

Eleven years later, I am still trying to understand how the City could think it was appropriate to remove all signs and let the lines slowly fade, without providing any alternative.

PXOs are used in more municipalities than you may think. In fact Hamilton is the exception by steadfastly refusing to adopt them. Even our cousin in the east Oshawa has them across their Hamiltonesque 1-ways.

If they work elsewhere then why not here?

I think that one of Solomon's arguments was that the amber light PXOs are so rare that motorists don't know what they are, and so don't yield to pedestrians. This is a bizarre Catch-22 where the "official" solution is so uncommon as to be unuseable!

That is why they opted for pedestrian activated traffic lights: motorists know they are supposed to stop for a red light (the fact that the lights are often programmed with "minimal pedestrian service" requiring pedestrians to wait a very long time is yet another issue).

In western Canada there are pedestrian activated traffic lights (with fast response times) at particularly dangerous locations in addition to ubiquitous standard signs-and-painted-lines.

Nicholas, you believe that you are dealing with people of sound judgement, good will, and open to input and dialogue. But Fortress Hamilton operates differently. That is not the default state but rather the complete opposite.

Safely crossing the street conflicts with "The 20 Minute City" and The Fortress will have none of it.

There are options to tangibly show dissatisfaction on this issue. But given that residents with ideas are now The Enemy, this is not the place to discuss details.

So long as it's being discussed somewhere.

I came across this feature on Weston Road at Finch in north Toronto. Though it doesn't look awfully safe, it shows that city officials recognize that people cross the street. Whereas they could post a Hamilton style sign directing pedestrians to cross at Finch, they responded to actual, predictable patterns of pedestrian movement and provided somewhat of a lifeline. It's an example of the plain fact that there are options available to traffic engineers, other than pure denial.

In some of western Canada, like Whitehorse, cars stop when they see a pedestrian at the edge of a sidewalk wanting to cross the street. It's a mindset thing.

British Columbians, even in Vancouver, havehad the same attitude.

When I was learning to drive the driving instructor told me that I must stop as soon as a pedestrian takes one foot off the curb, even if the pedestrian is on the other side of the road.

In practice that means motorists on both sides of the road stop when a pedestrians looks like they are about to cross. And most crosswalks are the cheap and simple "painted lines and signs" variety!

My driving instructor also told me that a flashing green traffic light meant it is pedestrian controlled and that I must be prepared to stop at any time. Here in Hamilton, the tendency is to force the pedestrian lights to be synchronized with the non-pedestrian lights because the traffic department fears that otherwise motorists will be confused!

hell, even in calgary they stop. i was shocked to be standing beside a four lane highway, not controlled access but much the same size as the linc to give perspective, waiting for a break in the traffic to cross, and cars began to slow down, in both directions, and come to a complete stop! they must have been a little annoyed with me as, coming from hamilton, i didnt expect such behaviour and didnt immediately cross. four lanes of 80km/h traffic stopped to wait for a pedestrian to cross. in clagary of all places.

i sincerely believe that, much like the building code, our streets must be designed to protect our most vulnerable users first and foremost. we do it with car passenger safety, household products, all kinds of situations.

can you imagine the outcry if someone every three months died, in our community alone, from unsafe strollers? or clothing? or stairs? things would change, quickly

maybe lawsuits are the answer.

While it has been a few years since I last visited Vancouver, the traffic would stop to let you cross the road, even at intersections where there were no signs, paint, lights. I often had 6 lanes of traffic stop for me on Granville Street.

In the end it is better for the drivers. Less traffic lights to deal with, less stop signs and a lot cheaper.

As mentioned above, certainly a mindset thing. It would not happen overnight in Hamilton, but it would be nice to start somewhere.

The funny thing is that the law is the same in Ontario, but the attitude of drivers is very different. They never stop for pedestrians crossing at non-signalized intersections on busy roads, and rarely even on quiet residential streets.

I think Vancouver drivers are not quite as good as they used to be, but there is still a huge difference.

I would imagine you would be pretty brave to cross South Granville at 29th at one of those non-signalized intersections.

Good catch: that stretch of suburban South Granville is indeed very bad (600m between marked pedestrian crossings). I wonder if it has something to do with the fact Shaughnessey is the wealthiest neighbourhood in the City?

But overall, Vancouver is still much more oriented to pedestrians. And it does have an array of pedestrian crossings available to use, not just $80k pedestrian activated traffic lights.

I'm not claiming Vancouver is perfect, just that the attitude of drivers and city engineers towards pedestrians is much better overall.