Where Do We Go From Here? Hamilton Confronts Climate Change

I went down to City Hall on Wednesday for the Economic Development Committee of the Whole (COW) meeting on Hamilton's air quality and climate change policy. After a presentation by Dr. Dennis Corr on the sources of air pollution (transportation is the worst offender) and by the health department responding to Corr's report, Brian Montgomery presented an initiative for the city to adopt a corporate climate change policy, to be followed by a city-wide policy.

Eleven citizens made presentations (more had signed up, but could not attend once the date of the meeting changed), and there were about fifty people in the audience - a huge number considering this was a morning meeting during the week.

Climate change is clearly a serious issue among the public; too bad the same cannot be said for City Council. Sadly, not enough councillors bothered to attend to achieve quorum, so the committee could not officially receive the staff report on creating a corporate climate change policy or the presentations from citizen delegates, of which I was one.

The city's role in adapting to, and mitigating, the effects of climate change is not a big priority for some councillors. The sad irony is that Hamilton does not need a brand-new climate change policy. It just needs to follow the policies it already has.

So, for the benefit of those councillors who couldn't make it or who had to leave early, here's a copy of my presentation, titled "Where Do We Go From Here?" (You can also download the slide show as a PDF.)

Climate Change is an Energy Crisis

Climate change is caused by how we produce and consume energy:

These are determined mainly by our land use and infrastructure decisions. Change those decisions and our greenhouse gas production will change. It's that simple. 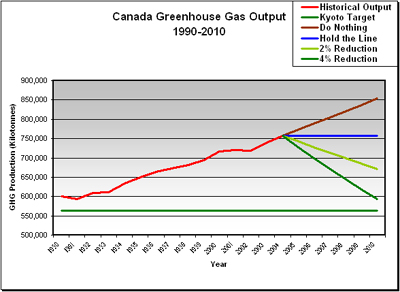 Hamilton Can’t Solve all of Canada’s Problems, but:

Cities produce three quarters of the world’s greenhouse gases. That means cities have the most opportunities to improve.

How can we do this? It turns out that our planning guides all point in the same direction:

I looked at the following six reports, all commissioned by the city:

His report leads with the following recommendations:

The Direction from Vision 2020

"Architecture, green building technology and environmental design are commonly used to create neighbourhoods that are models of energy-efficiency, waste-reduction and respect for nature."

"Hamilton is a model for other communities in the way in which we integrate short-term economic benefits, long-term environmental and social costs, and indirect economic costs in our evaluation of public and private initiatives."

"New jobs are created in sustainable businesses that build on the community's strong academic, commercial, industrial, and cultural resources."

The Direction from Places to Grow

"The Government of Ontario recognizes that

will contribute to maximizing the benefits, and minimizing the costs, of growth."

Places to Grow is badly compromised by the political decision to mandate only 40 percent infill instead of the much higher rates of intensification we need, but at least it acknowledges explicitly that cities must do more to limit sprawl.

"The City of Hamilton should transform rather than merely add to its current planning processes. The transformation should be one that puts energy concerns first and centre in all its planning."

The Direction from the Agricultural Action Plan

"The goals that the committee has put forward in implementing the vision would be first and foremost to retain the agricultural land base and to promote financial sustainability for future generations. Obviously if there's no land base, there's no farming, so that's fundamental."
- Margaret Walton, AAP Coordinator

The Direction from GRIDS

Based on the direction provided by the Province, the preferred growth option will plan for 80,000 units by 2031.

Intensification under the preferred growth option will be approximately 26,500 units.

"The estimate approaches the 40 percent intensification level expressed in the province's Places to Grow Plan."

That's right: Hamilton's long term growth strategy, developed over years of consultations and based on the nine directions listed above, couldn't even manage to meet the bare minimum legal requirement under the Government of Ontario's mediocre Places to Grow Act.

... not just window dressing. According to the Neptis Foundation, Hamilton had the lowest rate of intensification in the Golden Horseshoe between 1991 and 2001, locating just 22 percent of its new development within the existing built-up area. 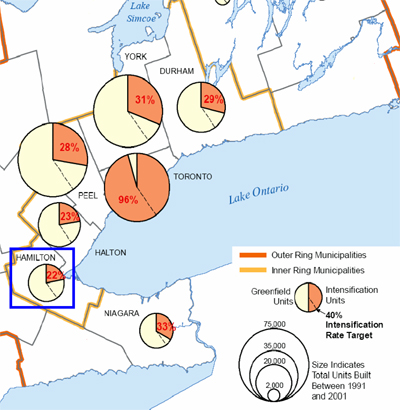 While taking a leadership role, Hamilton can still learn from the examples set by other, even more visionary cities.

It's no coincidence that Vancouver is widely regarded as the most vibrant, livable city in Canada. Twenty years ago, people in Vancouver were afraid of density. They had been scared by the bogeyman of "140 new Century 21 Towers", to borrow a phrase from Anthony DeSantis, president of the Hamilton-Halton Homebuilders' Association.

However, after two decades of smart, high quality intensification in the core, Vancouverites now want to see more density throughout the city.

"We know that we are living in a way that is unsustainable. If everybody lived the way we did, it would take three to four planets to sustain us."
- Sam Sullivan, Mayor of Vancouver

"[I]n the face of federal inaction, our leadership has captured national and international attention, spawning numerous media stories and grassroots support from a variety of different organizations. Our message – that we, as cities and as a nation, can and should cut our contributions to global warming pollution – is being heard around the country and the world."
-- Greg Nickels, Mayor of Seattle

Which Future Will Hamilton Choose?

The answer to that question, one way or the other, will come from the city council chamber. It's up to our councillors to follow the lead of the citizens they were elected to represent.

it still amazes me how the media will twist a great presentation like yours to make it sound like some rogue, crazy nuts always waste their time presenting at city hall. In the Brabant papers Kevin Werner referred to the 'environmentalists' who made presentations at this meeting. The reality is, all you (and all of us) are asking for is the city to follow their own plans. There's nothing crazy or 'way out there' about your presentation or your sources. All of your sources can be found on the city of Hamilton's website, as they are all documents that are supposed to be guiding our council decisions. If citizens who simply ask that council follow their own rules and implement their own ideas and their own strategies are considered rowdy, unwelcome 'minority' elements, then let's just switch to a communist system where the people's opinions don't matter. We've already given the power to business and corporations. Why not go the rest of the way and make it official so people like us quit wasting our time.

In the meantime, great job. Maybe they'll start paying attention to themselves and their own reports one of these days.