Journey to the East 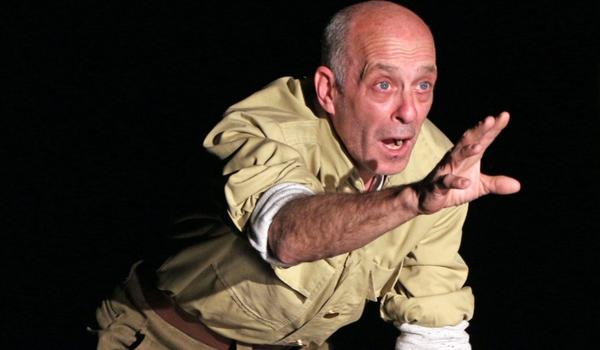 "Journey to the East" is a site-specific production performed in the nave of the New Vision Church at Main and MacNab, only a few metres away from what once was the centre of performing arts in Hamilton, the "Great Hall" at Hamilton Place.

This is a full-length two act play, making this production something quite different than most of the shorter productions that are more typical Fringe festival fare. This is not Naturalism!

Based upon a 1932 novella by German writer Herman Hesse, it is an exploration of ideas around spirituality, existentialism and the plight of refugees in the era immediately following the end of the First World War. The play, written over a period of fifteen years by Tottering Biped's Artistic Director Trevor Copp, features a cast of three and is directed by Richard Beaune.

This is a very different theatrical experience to the other plays featured in the 2019 Hamilton Fringe. For one, it is a finished play with a cast and production team that have been working on it for several years now. Secondly, the play is chock full of rich imagery with symbolic and expressionistic elements. It is not meant to be taken literally, but instead depends heavily on an audience interpreting what they see and hear.

In the first act we find ourselves up in the balcony of the church, looking down from above at the onstage action. The lighting is sparse, but we see a man in a soldier's uniform (Michael Hannigan), drawing a spiral on the floor.

We experience a moment of sheer horror as we follow the soldiers who have been tunnelling underground to lay explosives under the trenches of the opposing army. They are discovered, hand to hand combat ensues, and one soldier is left behind to die alone in the dark, an act of cowardice that haunts those who survive it.

This traumatic experience is dramatized using a series of rich images, often created with the cast's bodies, which also includes Zach Parsons and playwright Trevor Copp, writhing about on the floor.

At the end of the war, our protagonist finds himself on a spiritual journey, following a stream of refugees as they slowly walk - "east" - toward an unknown metaphorical destination.

By the second act, the audience has now been moved into a circle around the stage and we see the final events of the play from a more typical perspective of a theatre production. Some of what we have been led to believe from the first act is unravelled with a more mundane explanation for the events that we have witnessed earlier on. It is thus left up to the audience to draw their own conclusions as to which version of the two stories was real.

Still, we discover that the imagery is rich, with a violin that represents the artistic soul of one character that is sold in a crisis of faith. A spiritual guide helps our hero to understand what he has lost and bartered away.

I would encourage an audience to grab the opportunity to see such a well-realized production that has something truly profound to say about the struggles of humanity. In wake of the "othering" of refugees that is prevalent in North America at present, it offers a very important perspective on life and the human condition.