Personally, I dare to dream of a quick Phase 2 extension to Hamilton's LRT.

[..meanwhile, Ottawa LRT later gets resurrected, and then...]

My view is that this sequence is actually surprisingly realistic depending on political stars:

Fudge the years around by a few, but you get the picture when getting inspired by Ottawa's extensions as well as Kitchener-Waterloo's extensions.

The full A-Line doesn't make business sense yet due to poor ridership of A-Line. Also, T-Line makes no sense either. But cut the A-Line & slap on the density T-stub, turn it into one LRT, and voila -- the correct recipe. 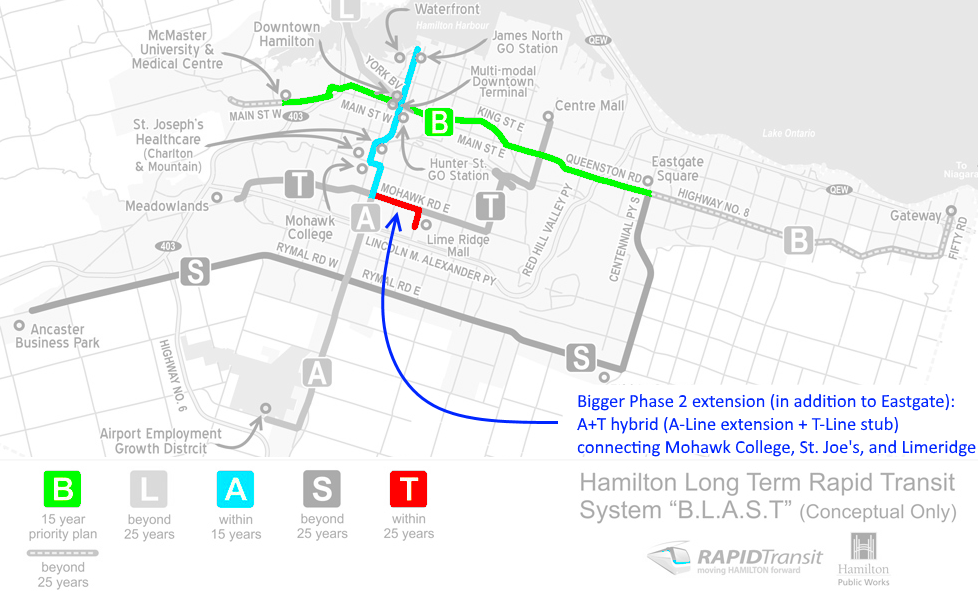 Long term I believe #WeCannotExcludeMountain -- I think it's potentially key to LRT survival. Maybe not. But very interestingly: I notice I turn around many mountain residents when I explain Ottawa (the "I hate the LRT because Mountain is excluded" residents) so telling "The Ottawa Phase 2 Story" can warm a bigger percentage to the LRT.

The A and T lines can become separate LRT lines later (25 years from now) -- they will run as concurrent express buses, but with LRT overlaid on the density part (The more justified Waterfront-thru-Limeridge section).

But the brand new mountain LRT route (A+T hybrid) is probably the best-benefits economically in a mere 12 years from now.

That assumes, successfully picking up the pace on $500M of bus funding from $372M federal/provincial + city pitchin to ramp up the ridership properly while also doing a "just-in-case" EA of the AT hybrid from 2018-2022 for a "just-in-case" 2022 election funding of a justified-business-case AT hybrid.

Especially after LRT opens in Ottawa and Kitchener-Waterloo (first modern-era cleansheet LRTs operationg) and riders give those some acclaim.

If necessary, we need to be loud about Phase 2 during municipal election to remind residents about the truth that -- long term -- they aren't being excluded. A lot of lukewarm mountain residents actually love my idea -- not the ardently anti-transit types but the concerned types that are upset of mountain exclusion too (The "Why along B-Line first?" types). You see, this may actually be LRT survival's key.

I was born in Ottawa. I lived in Ottawa. I witnessed the Ottawa LRT theatrics as an Ottawa resident. I'm telling you this now. Depending on how similarly the political stars align, Phase 2 may save the LRT.

The politics is NOTHING new to me.

Let's simply just have an EA ready. Just in case we're seeing densification booms & bus booms -- that the Waterfront/Limeridge plans become real too -- then Hamilton is fully prepared for 2022/2026 election funding of LRT extensions if all the justification checkboxes are all ticked This sends the correct positive message to the Hamilton Mountain.

Phase 2 is realistic, with some optimizations.