It is possible to make a one-way street like Main pedestrian-friendly, but it would involve huge cost and a major decrease in traffic capacity - and it wouldn't address the harm done to local businesses.

In the past, opposition to one-way conversion of Hamilton's streets was based on a straightforward defence of the status quo: streets are for moving motor vehicles as quickly as possible through the city and we should avoid anything that might slow traffic down.

Other concerns, such as pedestrian safety and convenience or the viability of downtown commerce, didn't register.

So let's see what it would take to keep Main Street one-way, but make it attractive for pedestrians and commerce. I'll compare Main Street to Boulevard de Sébastopol in Paris, since these are two examples I know well.

Comparing Main Street West and Boulevard de Sébastopol, we see that in Paris:

Despite all these advantages, I would still avoid walking along Sébastopol if I didn't need to! Now, if we wanted Main Street to be like this pedestrian-friendly boulevard, we would:

I agree that if we did this, Main would be attractive and safe for pedestrians (and still one-way), although it still wouldn't address the navigation problems for motorists trying to reach destinations downtown.

I also highly doubt that reducing the number of vehicle lanes from 5 to 3 or 2 would be popular with motorists!

I really don't understand those who claim that keeping one-way travel, but re-designing the roads to make them pedestrian-friendly, is some sort of compromise. It sounds more like "concern trolling" to me. Two-way conversion is the compromise, because it retains driving lanes but slows traffic and makes local destinations easier for motorists to reach.

In any case, even Paris is doing two-way conversion of some arterial roads in conjunction with the major renovations of Place de la Republique.

Here's Place de la Republique today. Currently, the surrounding streets are one-way and the place is cut into two by a large road around the middle of the central statue. To access the two 'island' squares, pedestrians must cross busy one-way streets, and it is uncomfortable to get from one island to the other.

The renovations involve closing the north side to traffic (apart from buses, taxis and bikes), converting the other side to two-way traffic and linking the two islands by pedestrianizing the area around the central statue.

The official justifications for the two-way conversion are similar to the arguments being made in Hamilton: to improve access to the centre of Paris (i.e. favour local destination rather than through traffic), improve the safety of pedestrians, and allow cyclists to travel in both directions.

Here is the site describing the renovations (in French, but with lots of pictures): http://www.placedelarepublique.paris.fr/. 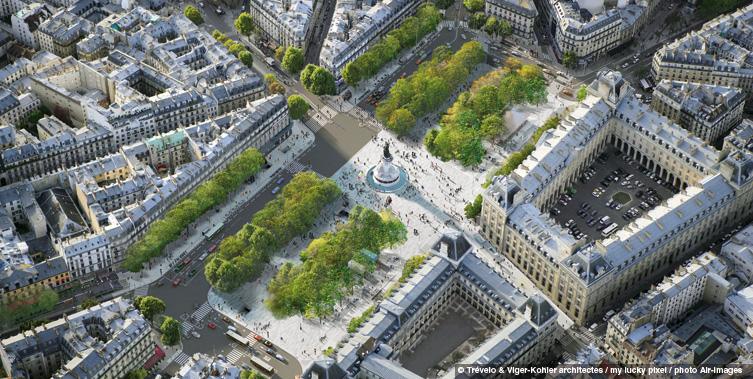 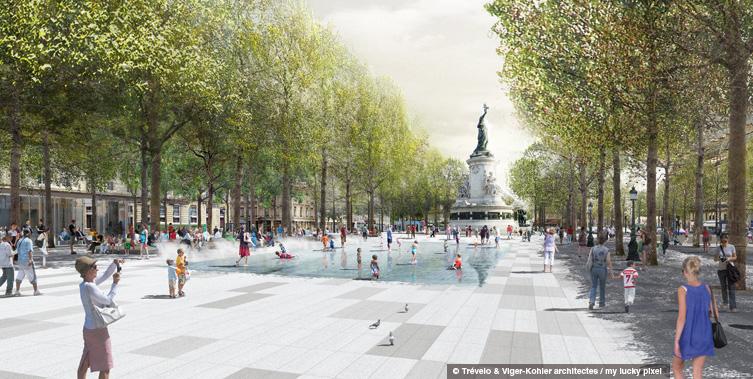 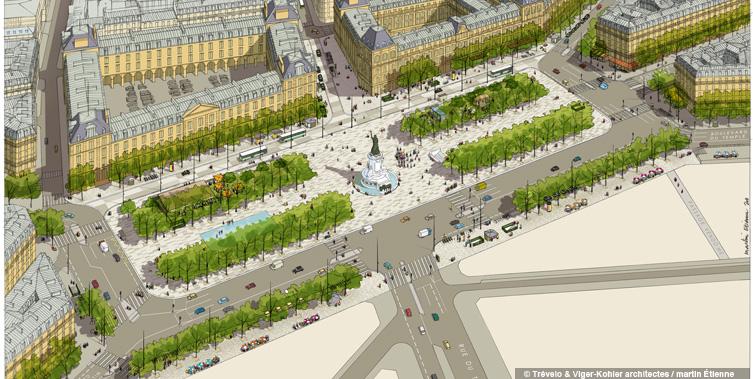 A newspaper article in Metro also justified the two-way conversions as a way to help local merchants, just as we've seen in the USA:

In summary, although it is possible to make a one-way street like Main pedestrian-friendly, it would involve huge cost and a major decrease in traffic capacity - and it wouldn't address the harm done to local businesses.

Editor's note: This essay is part of a series on the future role and design of our downtown streets. We encourage Hamiltonians to submit well-written, thoughtful and evidence-based essays that move the discussion forward. Please send submissions to editor@raisethehammer.org.

Paris has also tended to deprioritize areas typically poor or immigrant-rich, it seems to me. Am I mistaken?

If by "Paris" you mean the city of Paris (central Paris with a population of 2.2 million), I don't think that is true.

If by Paris you mean Ile de France (the greater Paris region, with a population of 12 million), then it is true that there are many suburban areas that are disadvantaged.

It is also true that rising real estate prices have pushed the poor out to the cheaper suburbs (as is happening in Toronto).

One mitigating factor is that a French law of 2000 mandated that all municipalities must ensure that 20% of all accommodation is geared to income social housing by 2020.

I think York Blvd was really an outgrowth of the City Beautiful movement popular in North America and the UK rather than the high density urban form favoured by Haussmann.

Thanks for the clarity. I got thrown off by the architectural clearcut, but you're right, Hausmann did it with far more panache.

Nicholas (not Ryan), my only complaint about this argument is that rehabilitate-but-keep is "concern trolling" - I often suggest it simply because I'm trying to find a compromise, a goal that we could get both sides to meet upon. I want two-way streets, but I'd take lose-a-lane-or-two as an improvement if I could get it.

"Remove (at least) one lane to widen sidewalks, add parking and plant trees. (How many lanes would need to be removed so the sidewalks occupy half the total road allowance?)

Remove another lane for a physically separated bus/cycle lane.

Ensure every intersection has a pedestrian crosswalk.

I agree that if we did this, Main would be attractive and safe for pedestrians (and still one-way)"

This would be acceptable to most motorists. To say it wouldn't is pure conjecture and defeatist. Nobody has every asked. Whats the harm in floating this idea? Are you afraid it might be accepted? Show a compromise that doesn't cripple movement but rather slows it and you have a chance

"Ensure every intersection has a pedestrian crosswalk."

I make extensive use of King and Main. This is something I can definitely live with. Having lights stopping traffic for the sake of stopping traffic in the hopes that it will make things safer isn't all that sensible to me. If lights go red because someone wants to walk across, that's an entirely different story and very reasonable.

I think his problem is that your comments are silly and add no value to the conversation, and he wishes you would just stop. Just guessing though.

I noticed Caroline St is about to go two-way for a whopping 2 blocks from King to Main. I'm sure it'll take 7 more studies and 9 years to complete the conversion all the way to York....but, no surprise, instead of converting Caroline to 1-lane each way with street parking on the west side it looks as though they are making it 2 lanes south and 1 lane northbound. At least for the first block from King to George.
Hopefully this is just temporary during the Staybridges construction, but somehow I doubt it.

Feel free to run for elected office, I'm sure you could convert all of Hamilton's streets to 2-way in a matter of days of taking your seat!

Isn't the 3:1 conversion expressed on central portions of John and James as well? This seems like another way the city could enact two-way without having it be an equitable flow scenario. It might prove to be the most politically viable outcome given all we know about council attitudes. As always, a matter of "careful what you wish for/demand post-haste".

Hilarious! Hamilton has just as much in common with Paris as it does with the moon. If you really want to model Hamilton after Paris then the first thing you need to do is make it one of the biggest most important cities in the world. After that all the little things will fall into place. As soon as Hamilton has a density like Paris then transit will make sense, and money to boot. Sidewalks taking up half the roadway would make sense too especially if you were to design them in an era when nobody drove an automobile. Mind you most of the people living in Hamilton would not be able to afford their current digs, Paris is one expensive city. A very small bachelor apartment costs more than a 3 bedroom apartment in Hamilton. Be careful what you wish for.