The Downtown BIA recently removed a reproduction of an Alfred Joyce painting on a utility box on King William. Is there some way to restore it?

Raise the Hammer publishes many articles that take a stand or rally support for civic action. This is merely meant to draw attention to a recently disappeared piece of downtown street art and invite discussion on the subject. 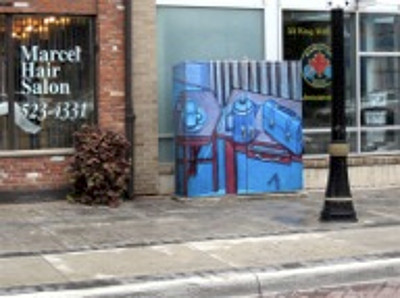 The work is a reproduction of a painting by the late Alfred Joyce that for the last seven years was wrapped (like ads on buses) around a steel utility box on the north sidewalk on King William Street between Hughson and John streets.

It featured an old-fashioned coffee pot and steel lunch bucket on tables in Joyce's studio on the fourth floor of what it now known as the Empire Times building on the northeast corner of King William and Hughson.

An inscription on the side of the box said the picture represented Hamilton's no-nonsense working-class culture.

Credit for the project was given to the Downtown Hamilton Business Improvement Area, Arts Hamilton (now the Hamilton Arts Council) and the City of Hamilton.

Many thought it was a wonderful addition to the street, but I was surprised to learn from BIA executive director Kathy Drewitt that the installation in 2007 cost $2,500. 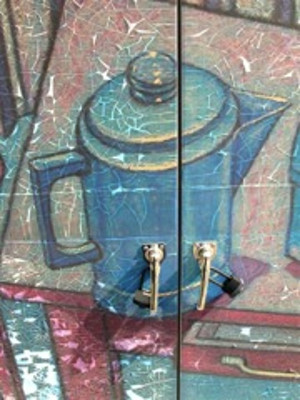 Deterioration of the painting earlier this summer

The original artwork is owned by Cees and Annerie van Gemerden, who allowed it to be reproduced. At the unveiling, the colours were bright and vibrant. Gradually they faded, the surface cracked and by this summer it was peeling off.

Rather than let the work decay further, the BIA had it removed, leaving the shiny steel surface of the box briefly bare before it attracted graffiti. 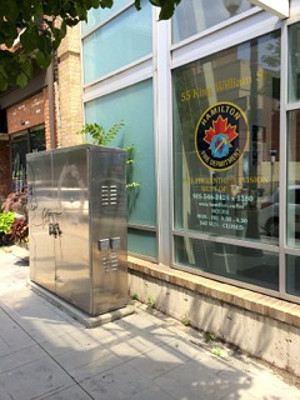 Google Alfred Joyce and you won't find much. What little I know comes from artist Gord Pullar, who once had a studio in the same building, and You Me Gallery owner Bryce Kanbara, who profiled Joyce for a 1950-1987 retrospective show of Joyce's work at Hamilton Artists' Inc. when the artist was 78.

Joyce didn't have a studio until, in his 70s, he rented the space downtown. But he'd shown his work over the years at the Art Gallery of Hamilton, the CNE, the Carnegie Gallery, Hamilton Place and the Inc.

Kathy Drewitt says she will approach the King William Art Walk Steering Committee to see if it can afford to replace the work.

I'd be happy to see it there again, but among the questions that occur to me:

More than a quarter-century has passed since that retrospective show of Joyce's work. Gord Pullar thinks it's time to assemble another exhibition. Is there a gallery or group interested and able?

I'm lucky to have been given a chalk pastel Joyce drawing of the east side of James South from King to Main before the current CIBC tower was built and adjacent buildings torn down. It would be interesting to see more of his work from that period.

Street art is ephemeral. It is also recombinant, which is something that inevitably sticks in the craw of folks who spend $2,500 on a vinyl replica. Such is life.

If it the treatment was that decrepit in year seven, the lifespan is probably closer to five years. Vinyl wrap technology may have improved somewhat in the intervening years (in terms of resistance to graffiti and UVA) but I doubt the price will have collapsed significantly. Cost might be something like a dollar a day, with the artist (or his/her heirs) gaining nothing in the equation save exposure.

His work is becoming ubiquitous (it fronts a gallery half a block SE), but Dave Hind's aluminum works would be a wonderful long-term solution as they are constructed of weather-resistant materials (the NW corner of Main and Locke has been up for over a decade). The flipside? His art is worth considerably more than a vinyl wrap. As it would be, since it's original art, not a high-res print.

Better industrial design is the answer to ugly utility boxes. And street art that is commissioned and bankrolled by the City or BIAs will almost always fall flat. It is a simulation, not the real thing.

I honestly think they should save their money invite area artists who will do it for the fame. Have them submit ideas and choose the best ones. When the art fades a bit or at regular intervals replace it with new.
Here is another way to look at it. If you have a graffiti problem and the taggers will respect the art on the utility box, $2400 is a good deal for 5 years of no tags to clean.

For fame, as in without payment? Do you work for the Airport?

I'm not an artist. In fact I'm not really into art; though iI did like the graphic on that utility box. I suppose that a number of artists are struggling financially. First, the airport want musicians to perform for free and now free city beautification is a consideration. I think the growing arts community deserves better. I didn't work for free and wouldn't expect others to.

It's a nice idea; traffic boxes are getting painted next door. Looks like it's paid for by a corporate sponsor logo in the corner, just like many median flowerbeds.

Burlington's traffic boxes are not getting painted. They're getting the "historic photo vinyl wrap" treatment -- much as Hamilton adopted as Gore Park several years ago (minus the corporate logo).

Not the worst concept. Historic photos are public domain and (sadly) there are more than enough long-vanished historic buildings to take care of traffic boxes across downtown.