When child support payors blatantly manipulate the legal system, it's time for the federal government to protect these families from ongoing abuse.

My divorce was finalized in August 2006, following a 22 month separation and a 19 day divorce trial. Since I was given sole custody of our five children, I was also awarded child support.

Child support is calculated using: the number of children; the province or territory where the paying parent lives; and the paying parent's annual income before taxes. Child Support Guidelines used by family court judges and lawyers are available online.

In Ontario, the Family Responsibility Office (FRO) receives direction from the court to collect, distribute and enforce court-ordered child support payments. Approximately 380,000 Ontarians use this service each year.

Once a year, parents exchange their most recent tax returns. My judgment stated, "Each year, no later than the 1st of June, each party shall provide the other the information required by s.21 of the Guidelines, including a complete copy of their income tax return filed for the immediately preceding taxation year, all attachments and any notices of assessment that have been received."

Since my divorce, I have never received my ex-husband's tax return voluntarily or on time. (This is ironic because my ex is a chartered accountant and his tax return is filed on time each year.) Hence, I go for years without annual adjustments to my child support. Unfortunately, I'm not alone in this situation.

Abusive men use the court system to continue their reign of power and control. Refusing to follow court orders is very common. It's very expensive to bring a motion forward to access tax information that was court ordered. So, I wait because the other thing abusive men like to do is take their ex-partners to court on a regular basis. I'm there every two years.

Approximate child support payments that were in arrears up to and including 2012 totaled $37,539. Arrears child support for 2013 and 2014 are yet to be determined, but it's a sure bet that his salary has not decreased or I would have been notified immediately.

The FRO has been doing exactly what they were mandated to do - collecting child support payments based on direction from the court. In my case, the FRO should be getting a yearly update from the court to increase the amount of child support collected, but that can't happen without my ex-husband's tax return.

For several years now I've been advocating for a change that would enable the FRO to access the tax returns of payors who refuse to adhere to court ordered dates of exchange. Then, adjustments to child support could take place in a timely manner and without cost to either party.

I've been told by lawyers that I don't understand the system - tax returns fall under federal jurisdiction while the FRO is provincial. I do understand this. In fact, while I have been advocating for this simple change, the Wynne government introduced Bill 14. When implemented, Bill 14 will allow separated parents to establish and regularly update support payments through an online portal, without going to court.

The service will calculate child support based on the Child Support Guidelines using information from income tax returns with the parties' consent. I simply want this service extended so the FRO can access the tax returns of payors breaching court ordered exchanges. This simple step will prevent abusive ex-partners from using the court system and FRO to continue financially and emotionally abusing their ex-partners and their children.

What's needed is a federal government that will give the provincial bodies the authority to access the tax returns of persistently negligent payors. Ask candidates if they're party is willing to take this courageous stand. Remind them it's in the best interest of Canadian children.

While this is definitely a serious issue, and know someone personally affected by the same issues you've experienced, I have a couple of points regarding your article.

First, with this quote.

Abusive men use the court system to continue their reign of power and control.

Why is it only abusive men? That should read "abusive partners ".

To solve the math issue, use the link 'mothers are give sole custody' to reach the Statistics Canada site. Scroll down to 'Custody' where you will find the statistics quoted in the article. The 1.2% missing from the calculation is listed by Statistics Canada as 'other' (arrangement) with no definition given.

Waaah! I'm a man and everything I see should be about me and my problems!

Get real Doreen, women can be just as nasty as men maybe even more so as they use the court system repeatedly.

Fathers are denied access just because women are well....

The legislation is there it just needs to be enforced but your personal rant does not even go to that valid point.

Why is it women are always the victims. I know 3 single divorced fathers with custody who have never been able to collect a penny of support from their exes and the courts don't want to help. Before you play the poor me card remember you are at least getting something, many others are getting nothing.

It is really a question of priorities as opposed to history/geography.

Yes, Hamilton did not exist before the car was invented. It is truly fortunate that we did not make any changes to our streets and urban fabric to accommodate cars. Because change is bad. 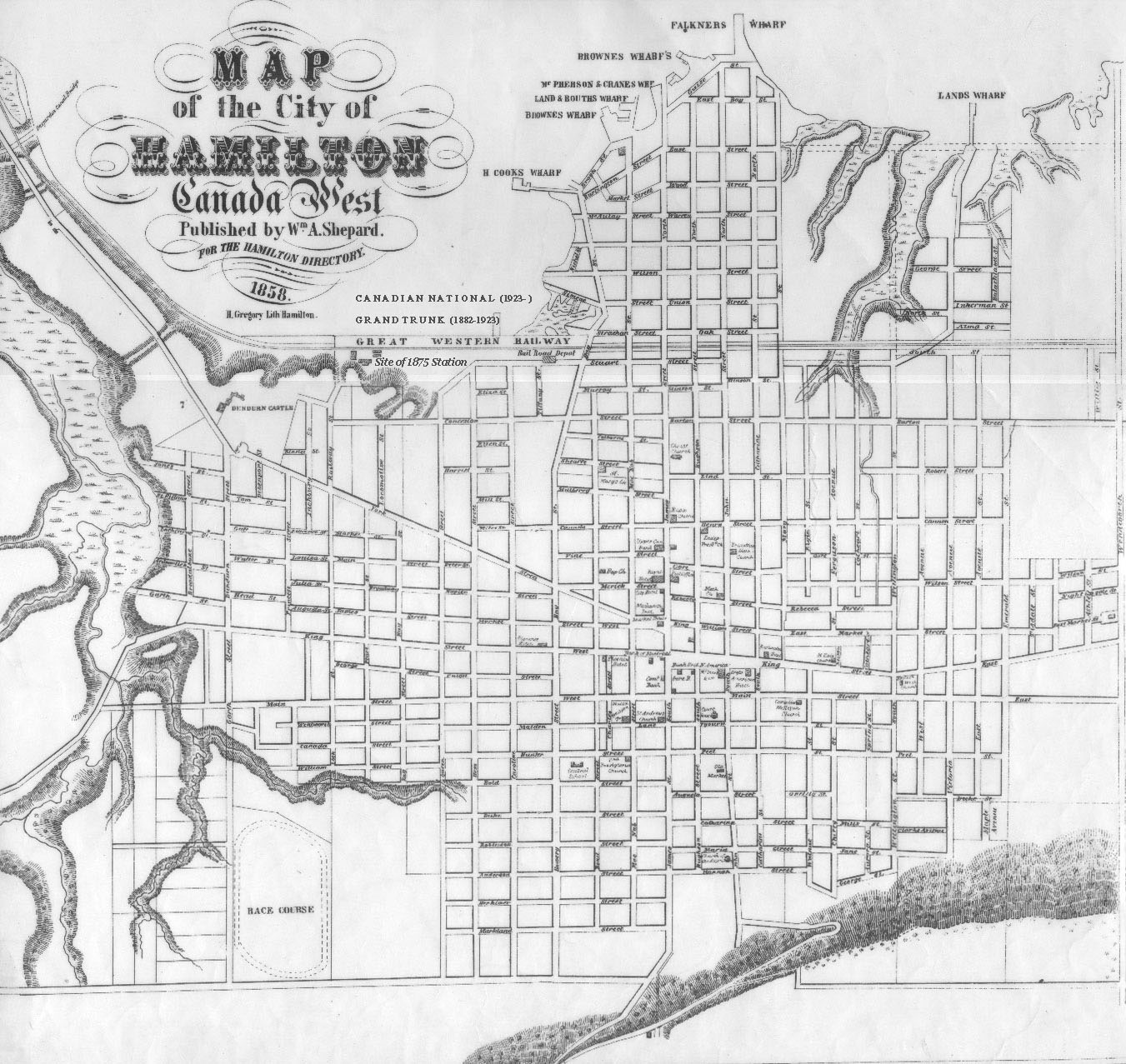 Dude seriously you need to get a life. Hamilton was an incorporated city with streets laid out in a grid almost a century before there were any cars on them and you know it, stop pretending we can't have safe neighbourhoods because we're only 200 years old not 500 years old. You left downtown to live somewhere else, good for you now stop trying to ruin it for the people who still choose to live downtown.

Coincidentally, this popped up on the CBC Hamilton page today ... 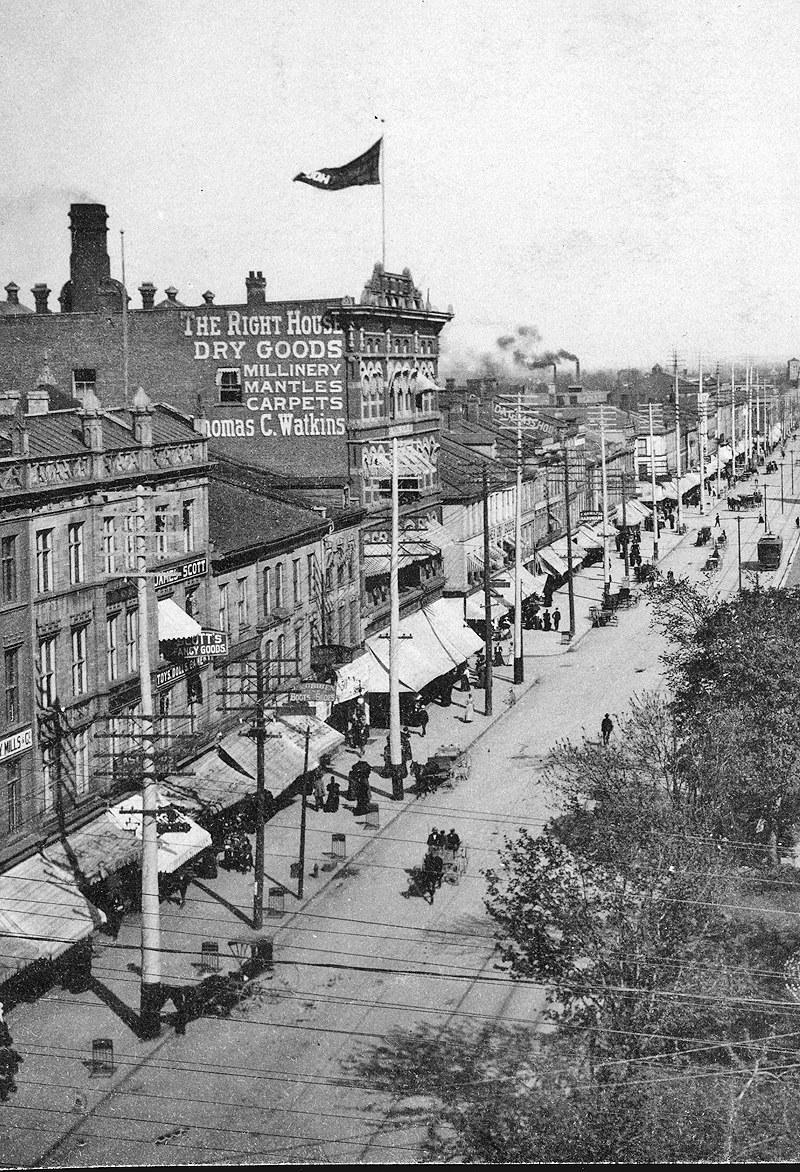 King Street West downtown, clearly prior to significant car use, with a huge sidewalk which is now mostly given over to traffic.

we can't go back in time, next you'll be saying we should have cholera back. i won't rest until the city is 100% cars and 0% people. google will have self driving cars soon so we won't need humans at all any more

You're awesome! Thanks for the laughs, izeholeh.

So, how heavy are those goalposts?

Better explain why then? Telling someone to leave when they challenge you does nothing to further your cause.

What challenge? All I see is whining about the fact that Raise the Hammer regularly posts articles from a feminist/urbanist/progressive viewpoint. That's pretty much the theme of this site. It's like going to the Weekly World News and complaining about all the stories about Big Foot or aliens.

Also, furthering my cause? You and LOL could care less about reasoned debate about "my cause" and just troll all the time. You are incapable of discussing anything with any degree of sincerity because you're both sociopaths.

The point is, the site no longer seems to care about it's stated goal and purpose. Familiarize yourself with http://raisethehammer.org/about and let me know when the site starts doing this:

Raise the Hammer is dedicated to providing a variety of views and approaches to the goal of making Hamilton a great city. Towards that end, we encourage readers to contribute feedback, letters to the editor, and article submissions. Please feel free to contact us with your comments and ideas.

Haven't seen a counterpoint to all the "we must embrace LRT" or "one way streets must go" or "the complete street myth is the silver bullet for downtown".

Too bad Ryan keeps rejecting your articles promoting the good old days of the 1970's.

Oooh, that's why you're so bitter. Because your articles are being rejected? My my...

I figured it had little to nothing to do with the topics at hand.

Nope, don't bother with wasting time on trying to write an article for the site. Even if it did pass the censors, er, "editors", it'd just be more fuel for the fire for anyone who can't see past their own vision for what the downtown should be.

Doreen, thanks for this article. As someone who raised one child on her own, I can't imagine the financial struggles involved with five children.

It's too bad the comments were hijacked into an argument about streets. Trolls.

Anyway, I've been there. The system is weighted heavily in favour of the less powerful partner, but FRO can help and did help me immensely. I know I didn't receive everything that was owed to me, based on Federal guidelines, but had to let it go in the end for my own sanity.

I can't state "facts" about all men, but I've lived through, and heard a sufficient number of stories, to know that good, responsible men are not commonly found in cases of divorce with child support required. Yes, women can be dickheads too, but my interactions have found it's mostly the other way around.

I hope you can get the restitution that is owed to you. If not, life does go on and your children will realize who did the heavy lifting for them. And he may never realize why his children don't give him the respect he thinks he deserves.