This is what happens when policy decisions are overtaken by narrow parochialism and the reflexively conservative rejection of meaningful changes to the unsustainable status quo.

In 2009, Council approved Shifting Gears, the city's Cycling Master Plan. The network was modest and the implementation timeline was highly unambitious, but for the first time the city actually had a plan with dedicated staff to start installing bike lanes.

But the plan contained the seeds of its own undermining. For one thing, if a street wasn't already identified in the plan as a cycling route on the bare-bones network, staff would not even consider adding cycling infrastructure to it.

More nakedly pernicious, Council also granted themselves the entitlement to veto any project in their ward that they did not support. (So much for the "streets are for everyone" excuse that is routinely used to deny the steady request of lower city residents to make their streets safer and more inclusive.)

One of the first vetoes came from Ward 6 Councillor Tom Jackson, who killed the bike lanes planned for Queensdale Avenue in his ward after a disrespectful public meeting that demonized cyclists as rogue scofflaws who don't deserve dedicated infrastructure. 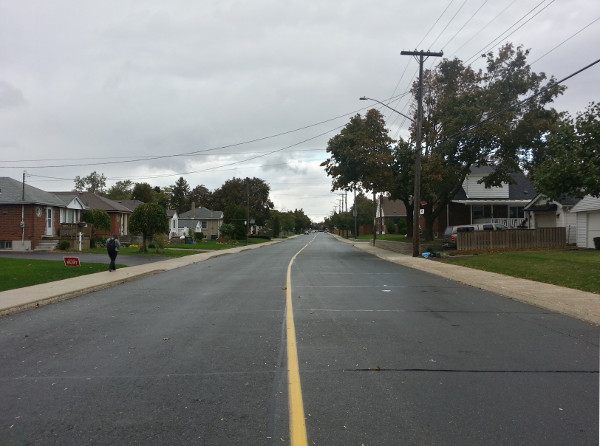 Queensdale is a wide residential street that runs east-west across a large swath of the upper city. It would be a great candidate for a continuous east-west bike route that avoids fast, multi-lane arterials like Fennel and Mohawk.

Jackson defended the veto by claiming that cycling is for recreation, not transportation, and that Hamilton's exceptional geography and climate means the number of commuters would not increase even if there was more infrastructure.

Three years later, the City installed painted bike lanes on Queensdale west of Upper Wentworth Avenue in Ward 7. They didn't extend east into Ward 6, but they were better than nothing and didn't cost motorists any lane capacity or parking, since Queensdale is such a wide street. 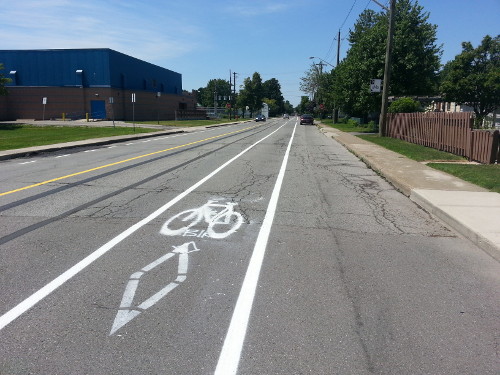 According to city staff, the short segment of bike lane was installed as a "pilot project to assess whether to continue bike lanes easterly to Upper Sherman". It was never made clear what the terms of reference were or how it would be determined whether the fragmentary bike lanes were successful.

It's also hard to imagine how successful any transportation network will be if it is composed of short, fragmentary, discontinuous segments. Imagine how many people would drive if our streets were just short strips of asphalt that didn't connect to each other.

In any case, not long after the lanes were installed, the City began ripping up Queensdale Avenue to replace the water mains. Bad timing for the bike lanes, but a great opportunity to extend them across Ward 7, if not into Ward 6.

The Queensdale reconstruction is complete and all the bike lanes have been removed. Instead, the city has painted sharrows on the new asphalt. Sharrows are not bike lanes; they are merely a way of reminding people in cars that they might have to share the lane with someone on a bike - you know, like any street that doesn't have dedicated bike lanes. 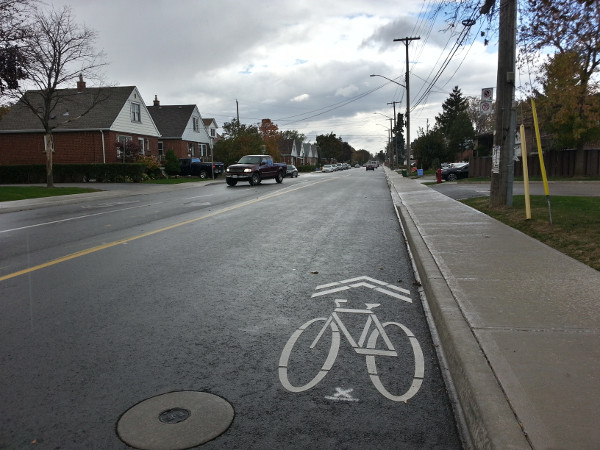 The sharrows don't even pretend to carve out dedicated space for cyclists, as you can see just west of Upper Wentworth where the sharrow points directly at a parked car. 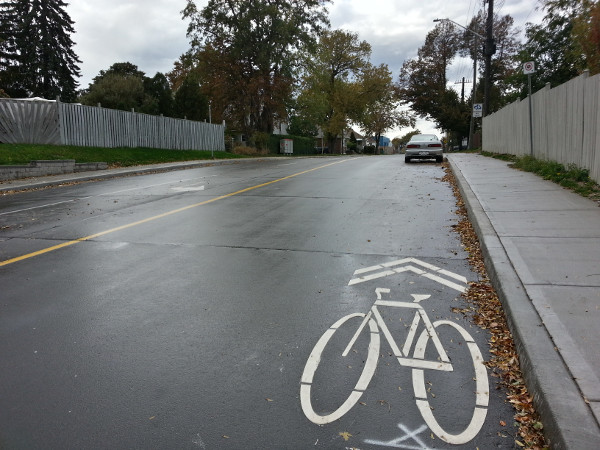 For some reason, farther west the sharrows move out to the middle of the street, serving mainly as a stark reminder of how easy it would have been to paint actual bike lanes into the wide roadway. 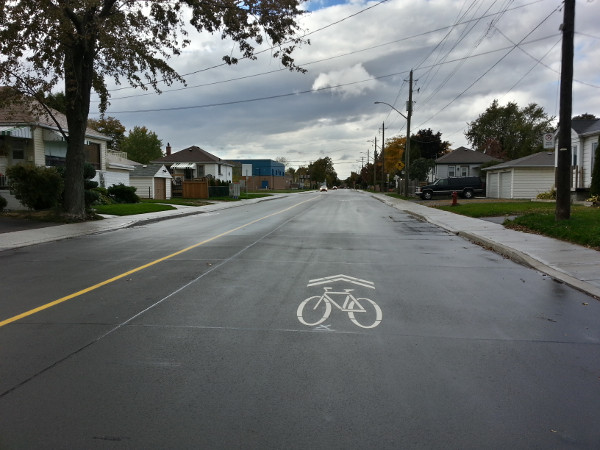 Ironically, the one stretch of Queensdale that is too narrow for dedicated bike lanes doesn't even have sharrows. 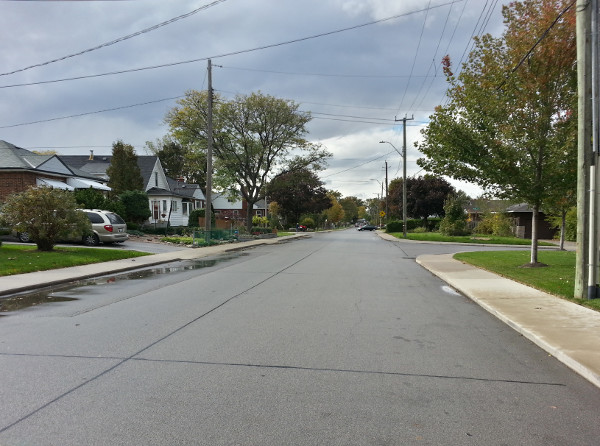 So we're in a situation where the City not only didn't extend the fragment of bike lanes that were on Queensdale, but they actually removed the little bit that was installed there just a couple of years ago!

Ward 7 Councillor Scott Duvall, who just won election as the NDP Member of Parliament for Hamilton Mountain, claimed on twitter that "bike lanes are marked on Queensdale in Ward 7". But on Friday I rode the full length of Queensdale and the only markings are the sharrows.

Perhaps Duvall is trying to claim that sharrows are bike lanes. If so, it is alarming that an experienced City Councillor doesn't know the difference between the two.

It's almost 2016. Cities all around the world are quickly recognizing that the 20th century fetish for designing streets around the assumption that almost everyone will drive cars almost everywhere is a dead end. It leads inexorably to polluted air, greenhouse gases, unhealthy commuters, cardiac and respiratory illness, high stress, catastrophic injuries, degraded public spaces, inequality, social isolation and ever-worsening traffic congestion.

The farce of the Queensdale Avenue Bike Lanes reminds us of what happens when policy decisions are overtaken by narrow parochialism and the reflexively conservative rejection of meaningful changes to the unsustainable status quo.

Ryan wrote: “It's also hard to imagine how successful any transportation network will be if it is composed of short, fragmentary, discontinuous segments.”

Kevin’s comment: As we are about to see when the City of Hamilton “connects” the protected Pipeline Trail and the protected Cannon Street cycle lanes with unprotected crap that is mere lines of paint on the road.

Thereby betraying the “Yes We Cannon” petitioners who asked for the protected lanes to be extended to Kenilworth.

Note the cross section being used by our illustrious 1960s public works department: 1 lane each way with center turn lane. This design is used in North American cities on streets with traffic volumes in the 20,000-25,000 vehicles/day range. This stretch of Cannon has 9,000/day. So once again we completely overbuild for cars and leave a skinny 4 foot painted lane for bikes with zero protection, and wonder why cycling numbers don't increase faster.

I think a dedicated lane for Queensdale would be best, but for other slower moving streets, this type of "cycle street route" would be best.

I just tried to look for a Hamilton Cycling Map, this is what I found.

Who could ever make sense of this? It is completely unusable! So, basically Hamilton doesn't have one.

This is what we have in Vancouver.

In fact, you can even get free cool printed maps the size of a business card that can be folded out.

Wake up Hamilton. Be better!

Why did they even bother?

Fire everyone and then sue the City.

It's a quiet residential side street. There are hardly any cars either. By your logic we shouldn't have bothered to repave it and should have just left it a dirt road since almost nobody uses it.

Also, maybe no bikes are on it because there are no bike lanes, even when there were bike lanes they only ran for a few blocks, what good is that to anyone? Bike lanes need to join up to other bike lanes just like streets.

Why do we keep maintaining/building car infrastructure we can't afford? At least reserving some of the road for bikes will reduce the wear and tear.