Downtown is Looking Up

Don't look now, but downtown Hamilton is potentially on the verge of a major makeover.

Don't look now, but downtown Hamilton is potentially on the verge of a major makeover. Empty buildings and parking lots have blighted the landscape for too long and now we see the potential for a real change in the physical and psychological makeup of the core.

In following up last issue's article on the downtown residential loan program, I was able to obtain some renderings and black and white drawings. The b/w sketches will be made available next issue.

Obviously we'll have a better idea in six months and more so in 12 months as to the status of these projects, but as a staffer in the downtown renewal department told me, they only offer loans to projects that are already well on their way, and they will take those loans away if a developer seems to be stalling or not moving forward with their plans.

After all, there is a lineup of folks with other downtown projects that could use that money and the downtown renewal department will make sure that a cold-footed builder doesn't sit on a grant.

As I mentioned last issue, the amount of street-facing retail space being developed in this next set of projects is exciting, and so are the number of brand new buildings being built. Slowly but surely, we have seen the number of old empty buildings downtown shrink as many are restored and filled with funky office and living spaces.

I am aware of 82 brand new stories of residential space being built in nine separate projects downtown:

This doesn't include other projects such as the Connaught hotel/condo, the old Fed building on Main or the Lister Block.

If we are fortunate enough to see all of these projects built, downtown Hamilton will have turned a major corner that can't be denied by even the biggest pessimist. And believe me, many exist.

This upcoming summer should be interesting to see new tower cranes erected, more colour renderings made public and quite possibly more new projects announced as the momentum begins to snowball. Things are definitely looking up downtown.

Following are profiles of four major projects in the series: the city housing building at 87-89 King St. E., the Lyric Century Theatre, the mixed use building at York Blvd. and Hess St., and the Royal Connaught redevelopment. 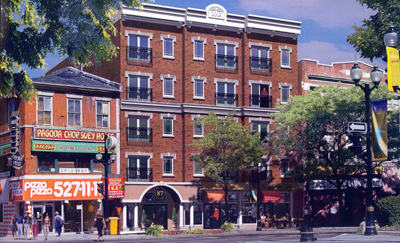 Bravo to the city of Hamilton for designing this beautiful five storey apartment building at King and John. I've said much in recent months about the need for Hamilton to reinvest in its urban neighbourhoods and create an environment where our historic buildings are nurtured and taken care of, instead of destroyed.

This building, although new, fits in perfectly with the fabric of Gore Park and King East. A modern high-rise would look out of place here, but this proposal fits the streetscape wonderfully. A city staffer told me that they will likely be somewhat selective of the street level tenants. Don't expect dollar stores or money marts to locate here.

City Housing is on a roll with the City Places building and City Views building already built at Walnut between King and King William, and now this project at the Gore. They are taking a lead role in showing other building owners and developers that Hamilton's heritage is worth saving and highlighting.

Many folks coming downtown will likely say "Now that's what we should be doing with our old buildings," not realizing it's being built in 2006. Hopefully landlords of buildings from the eighteen and nineteen hundreds will get in the game and bring their buildings back to life. 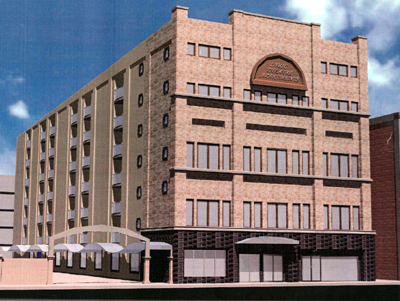 This project has been a long, slow process due to severe structural problems and a change in plans for the building.

The image shown is slightly out of date, but shows the general idea for this site: retain the heritage façade on Mary St. and build a new seven storey apartment building behind the structure.

One of the biggest changes now being planned is to build the new building as though it has been slid further to the north. In other words, the façade will remain in its current location, but the rest of the building will be staggered in order to open up some space on the south side of the building for a green park/courtyard element instead of just the narrow alleyway that currently sits there.

It's nice to see the façade retained and restored from one of Hamilton's grand old theatres. Perhaps the owners will develop a mural or phototour in the building's lobby or on the street to honour its past use as a theatre.

This is another great infill development in the King/King William corridor that will bring more life to that neighbourhood. 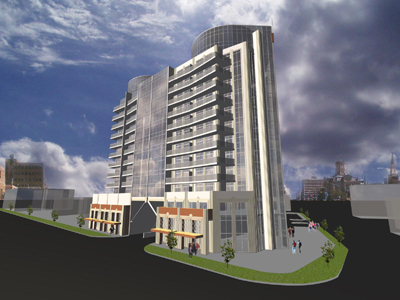 I am quite excited about this project. I'm preparing a 'vision for York' to present on RTH that basically takes the third lane in each direction and turns it into street parking with a bike lane between the parked cars and the live lanes. Then, all the empty building lots need to be promoted as infill sites for buildings in the four to six storey range from Dundurn to Queen and then gradually increasing to ten to fifteen stories between Queen and Bay.

The ground floor should be built at the sidewalk and contain retail shops, cafes, markets, and restaurants with patios and greenery. What is currently a bland highway strip could easily be a vibrant, pedestrian friendly boulevard with its centre median of trees and wide sidewalks. If someone from City Hall is reading this, please move this idea forward. 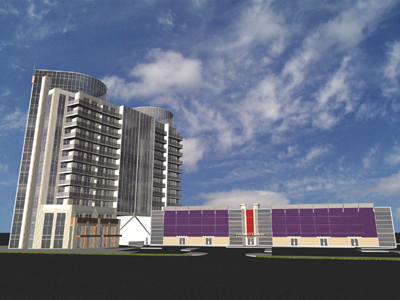 This project calls for a 15 storey condo tower on the site of Premier Fitness (the old Barn) at York and Hess. The gym is still on site behind the tower. I love the sharp, modern design of this building. As much as we need to nurture our heritage, there is something wonderful about striking, modern architecture blended in with the old.

I love the angle of this building at the corner. It is reminiscent of some of the angled intersections in New York City and even here in Hamilton at the Delta and along King East through Rosedale and Delta.

The ground floor on York will be commercial/retail with the only negative being the parking entrance from York to the fitness club. This is needed, however, due to the fact that Hess is one-way northbound - yet another reason to rid ourselves of these rotten one-way streets. 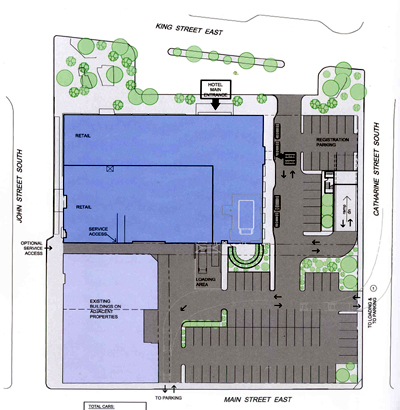 There are no spiffy images to show in this plan, mainly due to the fact that the buildings are being gutted and rebuilt inside, but the facades are not changing on the outside. When completed, this condo/hotel project will be a huge boost to the downtown/Gore Park area.

Some highlights to observe in this site plan:

This project is one of the largest taking place downtown and is well underway. It will be exciting when the Connaught reopens for many more years as a landmark in our city.

More great updates Jason. The York/Hess condo development is H-O-T, and if it proceeds, I think it will be the catalyst that changes the whole feeling of York Blvd. I'm impressed/intrigued also by the Royal Connaught update, as it's the first thing I've seen in print about that project. What is that in the southeast corner of the building--is that a pool in the former Vinton's Bistro/Fran's space? If Yale can talk H&M into Jackson Square I would truly be impressed and have renewed faith in the potential for all of LDJ Square to come back to life. I think H&M at Lime Ridge is a given--but if they can convince them to drop a second location downtown, it would be a big boost.

Wow. Im not living at home right now. I am in Brisbane Australia. But man I can't wait to get home to walk along these downtown streets an visualize these projects. Oh my goodness I love Hamilton. Ya Thanks for the updates Jason and the rederings. I look forward to seeing some more. O would like to get more info on the condo plans for the old Federal building.

The upper floors (3rd to the top) have been completely gutted. The first and second stories are being fixed up. the Main lobby is awesome, they're not touching that too much I don't think.

are you referring to the old Fed building being gutted and fixed up? Let's hope so. It's been a while.

Both actually. The Royal Connaught is what Axle was talking about though. The federal building is also completly gutted. There are also currently bobcats in the basement, so work is going on there.

I noticed that if you pull up the directions for the Honest Lawyer from their Hamilton website www.honestlawyer.com it gives an address on George Street.

I wonder if they were hoping to locate in the old HMP building or Fed building, but decided to do Jackson Sq since both of the other projects are taking forever. A huge eatery like that would be great in the ground floor of the HMP building.

MOre likey just a simple typo by the webmaster. The Ottawa location of the Honest Lawyer chain is at 141 George Street.

And if you click on the hamilton locatio it actually brings you to the ottawa site. I guess they aren't done their website yet :-)