Canada Must Act Now to Save Steel Industry

A more proactive government would see the value of using all of the tools at its disposal, including loans and incentives, to nurture and preserve steelmaking in Canada.

Thousands of steelworkers and their families rallied in downtown Hamilton on January 30 to stand up against the actions of U.S. Steel and the potential shutdown of Canadian operations and the loss of workers' pensions and benefits. 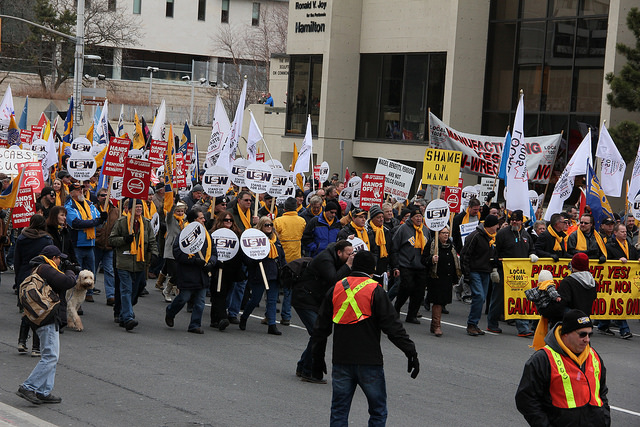 Both the United Steelworkers, the union representing the 2,200 employees in the Hamilton and Nanticoke plants, and the Ontario government are in a Toronto court opposing a legal move by the American parent company to scuttle the possibility of a revived and restructured steel operation.

"Canada's future prosperity requires a domestic steel industry as a critical component of an advanced manufacturing economy," said the union in the event posting for the rally. "Our families and communities need urgent action from our federal and provincial governments to prevent the disappearance of Canadian steel making."

At the rally the recently elected Liberal MP and former mayor, Bob Bratina, low-balled expectations of what his government can accomplish in this situation.

He told the assembled that little is gained financially for the steelworkers if the contents of a secret 2011 production and employment accord at U.S. Steel Canada between the former Conservative government and U.S. Steel are revealed. Plus, U.S. Steel might sue Ottawa if it went ahead with such a decision, Bratina warned.

"Unfortunately we were left a mess by the Harper government, that mess is now before the courts and once the courts have made their decision they will evaluate on how to move forward," Bratina later wrote in an email.

Provincal, Federal Governments Must Save Steel

In retrospect, it is not clear what Bratina and the Liberal government can offer to U.S. Steel Canada workers when their jobs are on the line, or the 22,000 steelworker retirees reliant on pensions that are underfunded by their employer, says McMaster University political scientist Peter Graefe.

The Liberal government is keen on signing the Trans Pacific Partnership (TPP), which makes it difficult for Canadian auto parts suppliers to compete in face of the elimination of tariffs and a significant reduction of Canadian content rules for vehicles and auto parts - a stipulation until now under NAFTA.

Auto is a major customer for steelmaking in Canada, and so any possible revival of the latter being pushed by the United Steelworkers Union is now in jeopardy, says Graefe.

"Bratina shows the tension between the Liberals trying to win a seat like Hamilton East with an industrial/manufacturing base, and the fact that they really have nothing to offer as an industrial strategy to protect or develop those communities in a free trade era," he says.

The political scientist says both the new Liberal government and the provincal Ontario government under Kathleen Wynne "have bought the mantra" that governments cannot save an industry from foreign control and domination even if it has strategic economic importance for the country.

A more proactive government, which does not exist today in either Ontario and in Ottawa, according to Graefe, would see the value of using all of the tools at its disposal, including loans and incentives, to nurture and preserve steelmaking in Canada, especially with manufacturing on the upswing again. "I don't think it is crazy, particularly now with the Canadian dollar at 70s [US] to say that you can run a successful [steel] facility [here]."

Wynne's Liberal government appears to be primarily concerned about avoiding the worst case scenario of being on the hook for the estimated hundreds of millions of dollars of pension money owed to the retired steelworkers in Hamilton and Nanticoke, states Graefe.

"The Ontario government is not seeing this as an issue of whether Ontario needs steel production capacity. So it is seen as a compensation issue [for Queen's Park]," he says.

Originally, the Steelworkers Union welcomed the takeover of the hundred-year-old Canadian-owned Stelco in 2007 by U.S. Steel.

The federal government under Stephen Harper approved the purchase under the Investment Canada Act. It included a commitment by the U.S. company to produce 4.5 million tons of steel a year and maintain about 3,100 employees in the plants operated by U.S. Steel Canada.

U.S. Steel has since taken the position that it could not keep its promise in face of the 2008 world financial crisis which led to a weakened demand for steel products.

Nevertheless, as recorded by Toronto Star journalist Jennifer Wells, the Harper government took the unprecedented action of taking U.S. Steel to court where it had a strong case. Never before had Ottawa sued a corporation "for non-compliance" under the Investment Canada, she reports.

U.S. Steel did consent to maintaining the Hamilton and Nanticoke plants until 2015 and put a little over $50 million in the operation and the local community. But other wording in the agreement, billed by Paradis as "positive," remains confidential, courtesy of both the former Harper government and the current Trudeau government.

But the legal situation continues to be in flux. On January 26, the Ontario's Court of Appeal struck down a previous judge's decision to keep the deal secret, removing an important barrier to disclosure.

In the fall of 2014, U.S. Steel Canada sought creditor protection under the Companies Creditors Arrangement Act in the Ontario courts.

Prospective Buyers Should be Wary of Environmental, Safety Standards

One should expect the involvement of the Ontario Ministry of the Environment in the proceedings because of the legacy of significant environmental contamination in the Hamilton harbour area where the U.S. Steel Canada's Hamilton Works plant is located, says Hugh Mackenzie, an economist at the Canadian Centre for Policy Alternatives (CCPA) and a former USW advisor.

"Anybody buying [Hamilton Works] is going to want an indemnification from the environmental liabilities."

The second track overseen by the same Toronto judge is a legal action undertaken by, U.S. Steel to get back the $2.2 billion it spent on buying Stelco in 2007. This form of buyer's remorse is an unusual legal move, says Mackenzie.

"U.S. Steel has never given a reason for the hearing," says Marvin Ryder. "Many of us have presumed that U.S. Steel wants to enforce its claim as a secured creditor as it feels the restructuring process is a waste of time and wants the Court to move in a different direction. But this is only a presumption," he says.

Meanwhile, Bratina says that once the courts have ruled on this case, "the [federal] government will then have to review the decision and determine how to proceed."

He adds, "this will take place in collaboration with the municipal and [Ontario] provincial government."

This article was first published in Rabble on February 5, 2015.